T-Mobile offered one brief glimpse into the machinations of its 5G network, confirming that its 5G customers consume roughly 15% more data than its 4G customers.

The news is noteworthy primarily because T-Mobile is not necessarily profiting off that increased usage. Like most other US wireless network operators, it is not charging extra for 5G connections. However, like most other operators, T-Mobile is using 5G and other services to encourage customers to sign up for unlimited data services in the hopes that they'll consider speedier 5G services a necessity.

The data point from T-Mobile  disclosed today by the operator's networking chief Neville Ray during T-Mobile's quarterly conference call  highlights just how different the 5G market in the US is when compared with some other markets. For example, Strategy Analytics analyst Phil Kendall recently noted that 5G customers in South Korea consume more than double the data than their 4G counterparts.

This may be due to the fact that South Korean 5G networks are dramatically faster than those in the US and many other countries. According to new data from network-monitoring company OpenSignal, South Korean operators provided the fastest average 5G speeds of anywhere in the world, at around 354 Mbit/s. The US didn't show up on the firm's top 10 rankings. 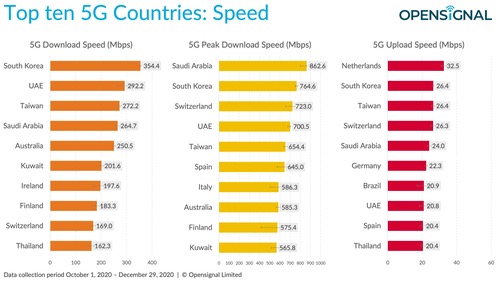 The reason South Koreans enjoy such speedy connections is likely due to several factors, especially the vast midband spectrum that operators in the country have devoted to 5G services. US operators, on the other hand, have mostly deployed 5G services in highband and lowband spectrum. 5G in highband spectrum is speedy but often relegated to downtown areas due to its propagation characteristics, while lowband 5G covers much of the country but typically isn't much faster than 4G.

T-Mobile is in the midst of rolling out 5G onto the midband spectrum it acquired from Sprint, having already deployed the service across its 600MHz lowband spectrum holdings. During its fourth quarter 2020 earnings report, T-Mobile said its lowband 5G service is roughly twice as fast as its 4G network, and its midband 5G provides average speeds of around 300 Mbit/s and peak speeds up to 1 Gbit/s. T-Mobile said its lowband 5G network covers fully 280 million Americans and its midband 5G network covers 106 million Americans.

"T-Mobile is positioned to stay ahead in the 5G race for years to come," CEO Mike Sievert boasted on today's call.

T-Mobile also disclosed some of its 2021 expectations. The company said it expects to gain up to 4.7 million new postpaid customers during the year, notching a total of up to $27 billion in adjusted earnings before interest, taxes, depreciation, and amortization (EBITDA). The operator also said it expects to spend between $11.7 billion and $12 billion on property and equipment, including kit for its new 5G network.

However, the company promised to provide more details about its 2021 strategy during an event in March. The event has been scheduled to occur after the quiet period ends on the FCC's massive $81 billion C-band spectrum auction. The agency hasn't yet named any winners in the auction, but there are indications T-Mobile spent heavily in the event.