Most US cable operators can expect to see competitive overlaps with fiber-to-the-home (FTTH) rivals ramp up by 2025 as several telcos push ahead with fiber expansions or upgrades of existing DSL or VDSL networks.

But, according to a new forecast from MoffettNathanson, Cable One should see the biggest surge in competitive fiber overlaps in the coming years  going from about 10% overlap today to about 36% by 2025. Comcast, Charter Communications and Altice USA are also expected to face an increase in FTTH competition, albeit not quite as sharp a rise as what Cable One is expected to face. 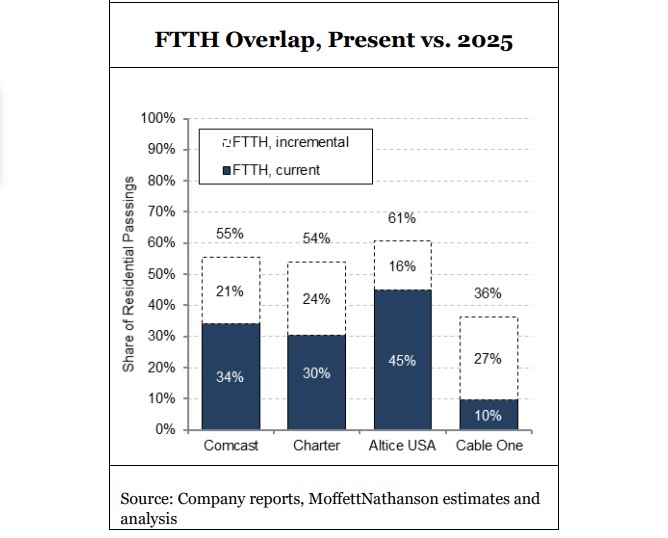 MoffettNathanson analyst Craig Moffett acknowledges that these forecasts represent "very rough forecasts" based on fiber plans or intended plans of companies such as AT&T, Verizon, Frontier Communications, Lumen, Ziply Fiber, Windstream and Consolidated Communications, and are not an exhaustive view of what every US telco might have in the works for FTTH. But it does offer a general idea of what is to come for those individual cable operators.

"A reasonable argument could be made that the TelCos are more likely to upgrade higher density markets, resulting in disproportionately more fiber being built in, say, Comcast's footprint than Cable One's," Moffett wrote. "On the other hand, one could argue that the TelCos have largely already built to the most attractive markets, and what's left in Comcast's footprint isn't significantly more or less attractive than what's available in Cable One's. We also don't know how much fiber will be built by companies not included in our analysis."

Of course, not every new FTTH passing represents direct competition to a cable operator. And some of those new fiber builds will be for upgrades of existing DSL or VDS networks. But this anticipated surge in fiber buildout activity has prompted the analyst to tweak his broadband subscriber forecasts for the publicly traded cable operators he covers.

While all of those cable operators are expected to add more broadband subscribers than originally expected in 2021 and 2022 as fiber network buildouts accelerate, Moffett has lowered his net add broadband sub forecast for the 2023-2025 timeframe for the US cable operator group as buildouts are completed and are converted into direct broadband service competition.

"[W]e expect that both 2021 and 2022 will represent new all-time peaks in total number of fiber homes passed," Moffett noted. "Typically, the competitive impact from overbuilds is felt with some lag, suggesting the impact on cable operators will peak in 2024/2025  Cable operators will have to contend with more fiber overbuilds, as TelCos increasingly see both more favorable economics for fiber deployment and increasingly acknowledge that their copper plant faces imminent obsolescence without it."

In the meantime, US cable operators continue to gain broadband market share, though not at the pace that they saw last year during the early phases of the pandemic.

With everything rolled up, the total US broadband market eclipsed 115.77 million subscribers in Q1 2021, a year-over-year increase of 4.7%. That placed residential broadband penetration at 85.3%, according to MoffettNathanson. 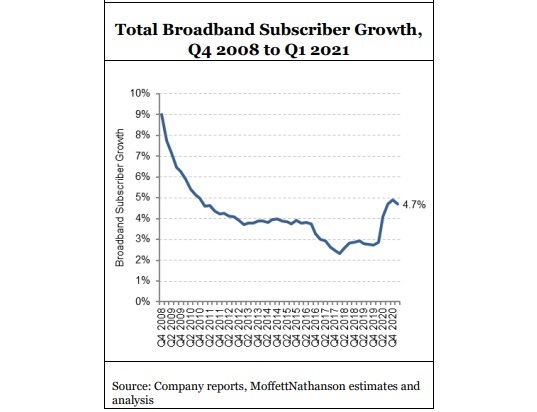 Among the various sectors US cable ended the period with 80.53 million broadband subs, well ahead of the telcos (33.48 million) and satellite (1.75 million). The forecast does not yet break out numbers for fixed wireless broadband.