SpaceX CEO Elon Musk and Amazon are fighting at the FCC and on Twitter about Starlink's proposed plan to lower the orbits of a portion of its constellation of broadband satellites.

Amazon, which is pursuing its own low-Earth orbit satellite broadband offering under the "Project Kuiper" initiative, is objecting to Starlink's plan, holding that it would raise the possibility for satellite collisions and cause harmful radio interference. Amazon also argued that the proposed changes could "hamstring competition among satellite systems."

Musk responded on Twitter that Amazon's objection does not serve the public interest, noting that Amazon's plan still has a long way to go before it reaches fruition.

SpaceX notes that its modified plan envisions a 10 Gbit/s downlink capability  versus current 100 Mbit/s capabilities  along with a 30 millisecond roundtrip latency.

SpaceX has also attempted to address the objections at the FCC. In a filing (PDF) last week describing a meeting between SpaceX Director of Satellite Policy David Goldman and FCC officials, the company held that its LEO-based system uses autonomous collision avoidance systems and that it is committed to "keeping space clean." 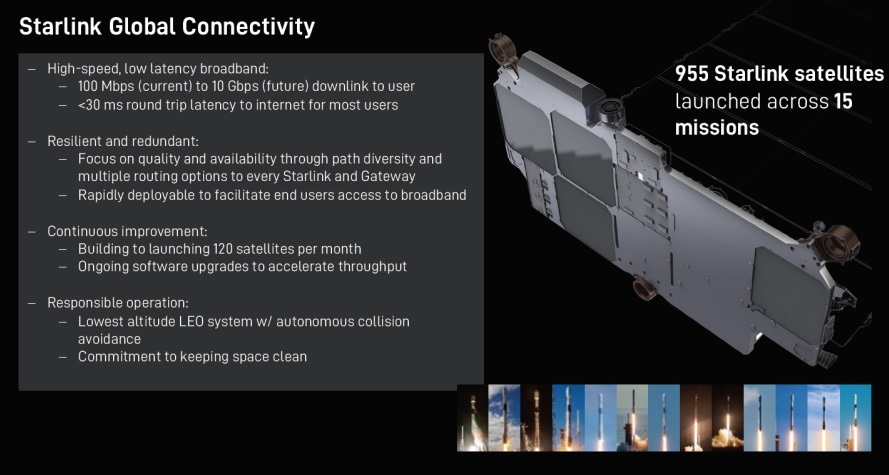 Click here for a larger version of this image.
(Source: SpaceX via FCC filing)

SpaceX, which is building toward a plan to launch 120 satellites per month, also asserted that claims of potential interference are "misleading," arguing that its proposed modifications will not cause significant increases in interference. SpaceX also claimed that objections likewise aim to stifle competition. "[P]otential competitors only reach contrary conclusions by cherry picking data and ignoring the majority of the modification," Goldman wrote.

In its presentation to the FCC, SpaceX also asserted that Amazon "has engaged in [a] continuous campaign to undermine authorizations from competitors."

Allow us to retort

Amazon's response: (1/3) The facts are simple. We designed the Kuiper System to avoid interference with Starlink, and now SpaceX wants to change the design of its system. https://t.co/hY1xNFuOwL

In follow-up tweets, Amazon argued that the proposed Starlink changes do indeed create a more dangerous environment for collisions in space and increased radio interference. "Despite what SpaceX posts on Twitter, it is SpaceX's proposed changes that would hamstring competition among satellite systems," Amazon added. "It is clearly in SpaceX's interest to smother competition in the cradle if they can, but it is certainly not in the public's interest."

Amazon chief Jeff Bezos, meanwhile, did not deign to engage with Musk via Twitter. In fact, it appears Bezos hasn't tweeted in almost a year.

Amazon isn't the only party giving static to SpaceX's modified plan to lower the orbits of about 3,000 satellites. Last month, Viasat petitioned the FCC to conduct an environmental review of the plan over concerns about light pollution and hazards to the Earth's atmosphere driven in part by the potential of space debris causing satellite collisions.

Starlink's service isn't yet widely available, but the company continues to promise that the service will be offered without contracts or data caps. It's been providing service in select areas under a beta program that prices the offering at $99 per month along with $499 upfront for the dish and router. Though Starlink's system is not under a full load for the beta, recent tests show the performance of Starlink's early efforts to well exceed the average speeds offered by geostationary-based broadband satellite services from Viasat and HughesNet.

Amazon's plans for Project Kuiper involve fewer satellites than that of Starlink  3,236 satellites compared to roughly about 12,000  at a price tag of about $10 billion. The FCC approved its application last year in a 5-0 vote; Amazon has not yet started to build its fleet.

Among its FCC commitments, SpaceX committed not to operate Starlink at less than 580 kilometers once Amazon reaches phase IV (the launch of more than 1,800 satellites). SpaceX also stressed that its safety designs enable Starlink satellites to effectively burn up on re-entry.

SpaceX also dismissed Viasat's claim that Starlink satellites have a 7% failure rate, putting forth an expert opinion/quote (from Jonathan McDowell with the Center for Astrophysics at Harvard & Smithsonian) holding that the figure cited by Viasat appears to count satellites that have been deliberately removed from orbit as "failed," labeling Viasat's contention as an "inexplicable interpretation."