Cisco hardware revival is coming at a cost

Only the language-mutilating technology sector could mint expressions like Zero Trust and SASE (pronounced sassy). Zero Trust means the opposite, because no one but a saboteur would buy the security product it describes if that were absolutely not to be trusted. Coined by jargon-loving Gartner, SASE stands for Secure Access Service Edge, four words that make no more sense in combination however they are ordered. That product also needs to be trustworthy, but probably not sassy.

Both featured in Cisco's latest earnings update, along with a fusillade of other baffling terms and references to obscure companies the ever-acquisitive Cisco snaffled at some point in the last year. Involvio, Slido and Socio, all bought during the recent fourth quarter, sound like things wizards recite in Harry Potter.

Cisco is desperately inept at communications, which partly explains why so few mainstream media outlets cover its financial updates. CNBC had a half-hearted stab at the latest, running over the headline figures in a few hundred unanalytical words. Neither the Wall Street Journal nor the Financial Times appeared to bother. They were more interested in T-Mobile's epic data hack and the latest numbers from chipmaker Nvidia. 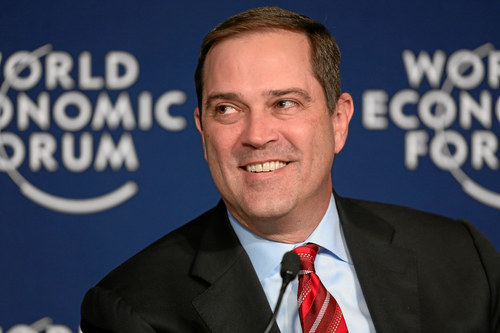 Cisco CEO Chuck Robbins has long been diversifying into software.

The Silicon Valley-based company was much easier to understand back in March 2000, when dotcom enthusiasm had driven its share price up nearly threefold in the preceding year. Back then, it was just a maker of the boxes (so-called routers and switches) that send traffic around the Internet. These days it is a technological Frankenstein's monster, a jumble of incongruous parts with mysterious names.

Cisco has morphed into this beastly shape because it has long feared stagnation or even obsolescence if it remains a hardware-only vendor. Traditionally, routers and switches are a one-off sale. The only way to generate additional revenues is to build a new and better box and hope customers will bite. New rivals have also emerged, sporting whizzy technologies that have put Cisco under pressure.

Hence the plunge into software, a strategy that consumed analyst attention on the earnings call with CEO Chuck Robbins and his various minions. Its $4 billion in software revenues over a 90-day period means it is now one of the largest software companies on the planet, said Scott Herren, Cisco's chief financial officer. "I mean, annualize that or look at the trailing 12 months, and it makes us somewhere in the top 10 software companies in the world," he said.

And yet the bulk of Cisco's revenues still come from its non-software business, which also happens to be growing faster. In the recent fourth quarter, the breakdown provided by Cisco indicates that sales of $9.1 billion came from hardware and non-software-related services. While software revenues were up 6% year-on-year, or about $230 million, other sales rose 8%, or $670 million.

Remember, also, that Cisco's software growth has been fuelled by acquisition. Involvio, Slido, Socio and the more substantial Sedona Systems  Cisco's most important fourth-quarter acquisition  are all software companies, as are dozens of other firms that Cisco has scooped up in the last few years. Growing a plant from seeds is much harder than buying one on the market, assuming money is no object.

What's more, several of the units that are mainly about software had a relatively weak fourth quarter. The applications business saw revenues dip 1%, to about $1.3 billion, while security sales rose by the same measly percentage, to $823 million. "The order rates were certainly higher than the revenue rates," insisted Robbins when quizzed about the lackluster performance.

In the meantime, infrastructure platforms, the big part of Cisco that includes routers and switches, witnessed a 13% increase in sales, to more than $7.5 billion. Admittedly, this comes after sales plummeted 16% in the same period of 2020, but it also represents the best fourth-quarter infrastructure performance for several years.

It possibly helps that Cisco has started to sell some hardware products on a subscription basis, but hardware's revival is also a sign of the strong, pandemic-era demand for Internet-related boxes and wires. Sales of newish 400G technology, in particular, are "taking off," said Robbins. "400G port orders were up 831%" last year, he told analysts, and more than 400 customers have now deployed products. "A lot of ports, Chuck. A lot of ports," cooed Rod Hall of Goldman Sachs.

The problem is that heavy reliance on hardware exposes Cisco to the ongoing shortage of critical components. Demand for cars, computers, smartphones and other gadgets that require sophisticated chips massively outstrips supply. Multi-billion-dollar investments in new facilities by Taiwan's TSMC, the world's most advanced chipmaker, and America's Intel will not provide additional capacity for several years.

The main impact Cisco expects right now is on profitability, as supply constraints push up equipment prices. "That turns into higher component costs as we buy from those suppliers," said Herren. Accordingly, Cisco is guiding for a weakish gross margin in the current first quarter of between 63.5% and 64.5%, down from a gross margin of 65.6% for the fourth quarter.

Fortunately, profits were healthy for that period, rising 5% year-on-year, to about $3.6 billion, as overall sales grew 8%, to $13.1 billion. And investors appear to like what they have seen from Cisco so far this year. Its share price has gained 25% since January and is worth 74% more than it was five years ago. But if the components shortage turns out to be costlier than Cisco anticipates, shareholders will be wishing for a software boom.