With apologies to Donny and Marie, Altice USA is a little bit country and a little bit rock and roll. However, the broadband growth challenges of its rock and roll side  the Optimum (former Cablevision) footprint in New York, New Jersey and Connecticut that tangles with Verizon Fios  tends to overshadow the underappreciated broadband potential of its rural Suddenlink footprint. 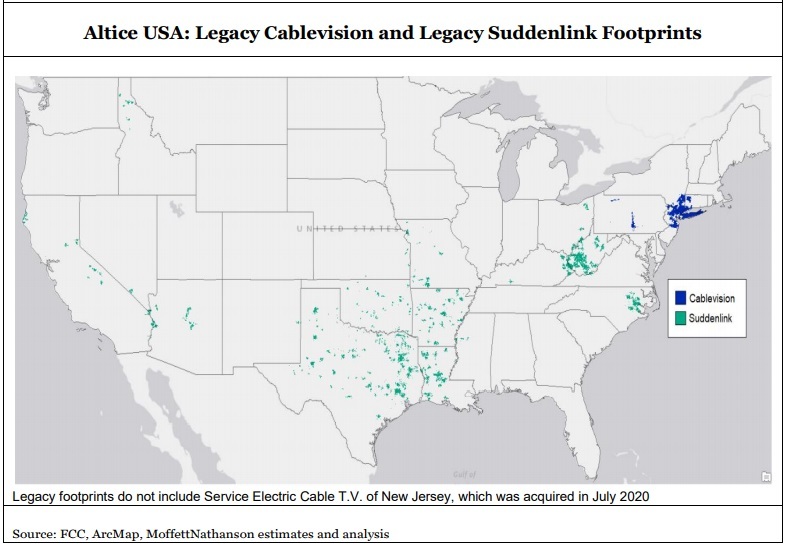 And that perception, which doesn't give much credit to Altice USA's rural opportunities, has largely been driven by the fact that it's been difficult to analyze the operator on a more granular basis.

However, a new analysis from MoffettNathanson that weaves in data from Comlinkdata provides a deeper view into Altice USA's broadband prospects across its varied service areas in the coming years. The general conclusion is that any broadband losses Altice USA suffers in the Optimum markets in the coming years will be more than offset by the gains it gets in the Suddenlink markets, which make up about 38% of the operator's residential footprint.

"On a blended basis, Altice's overlap with fiber is still higher than peers, but not radically so. And their blended broadband penetration isn't any higher than Comcast's or Charter's," Craig Moffett, analyst with MoffettNathanson, explained in a report that takes a shot at how much broadband subscriber growth runway Altice USA has ahead of it. "Just as legacy Cablevision is unusually growth-constrained, legacy Suddenlink has unusually high potential."

The perception that Altice USA is broadband growth-constrained, Moffett argues, has also resulted in a valuation of the MSO that remains far below its US peers. But he believes the company is a compelling long-term investment so long as it can grow broadband subs and total EBITDA.

"Based on our analysis of Comlinkdata's proprietary market data, we have greater confidence in our conclusion that they can," explained Moffett, who rates Altice USA stock as a "Buy" and gives it a target price of $55 (Altice closed Friday, April 16, at $34.40).

Moffett's fresh look at Altice USA relies in part on proprietary data from Comlinkdata focused on market share and switching behavior and how the company tends to perform against various competitive broadband technologies. 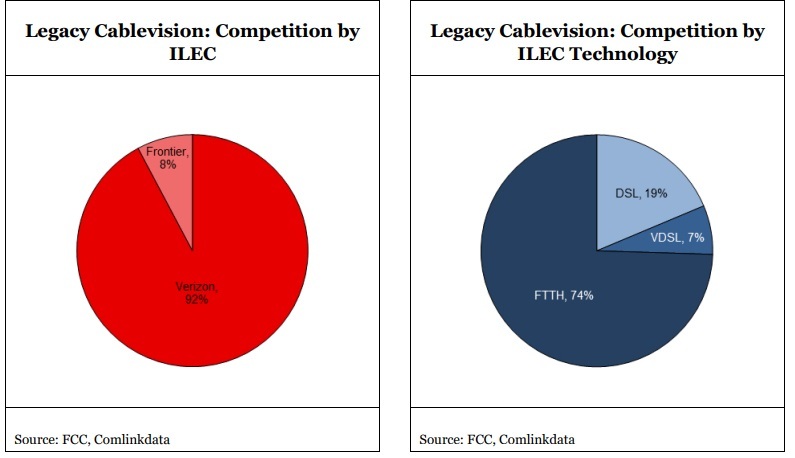 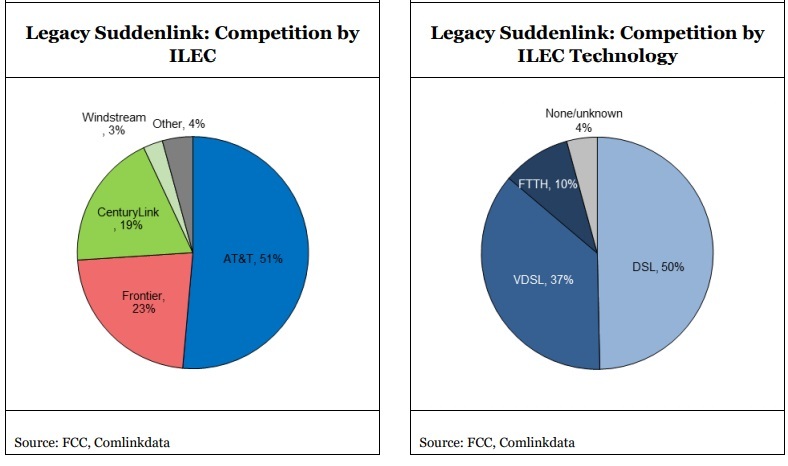 Meanwhile, the data from Comlinkdata, which implies that industry broadband penetration in the Suddenlink footprint is roughly 14 percentage points lower than in the Optimum footprint, is "reassuring," Moffett wrote.

"[G]rowth is likely to remain positive. That should be enough given their current anemic valuation," Moffett explained. He sees broadband growth in the old Cablevision markets staying relatively flat compared to a CAGR of 4.8% in Suddenlink areas in the coming years.

With everything factored in, here's how Moffett sees Altice USA's broadband sub growth and ARPU growth trending in the coming years, though its should be borne in mind that the analysis does not make assumptions about future Rural Digital Opportunity Fund (RDOF) participation or participation in rural broadband projects tied to President Biden's proposed infrastructure bill. 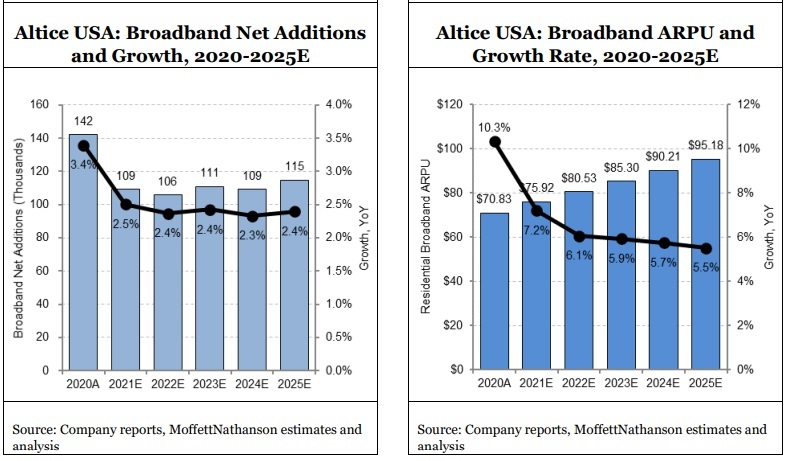 But it's not without some caveats. Moffett stressed that the updated growth projections for the operator still remain below those for some other operators, around a 2% CAGR for broadband subs, with "periodic quarterly losses  easily possible." He also points out that Comlinkdata's proprietary data shows that Verizon has been winning share relatively quickly of late, exposing a vulnerability Altice USA has against competitive pricing in the former Cablevision markets.

Meanwhile, the growth narrative driving the broadband market has skewed toward rural areas that face less fiber competition and lower service penetrations. Rolled up, it's another reason why Altice USA's Suddenlink footprint is being viewed as attractive broadband growth driver.

"All else being equal, less competition and lower penetration mean a longer growth runway," Moffett explained.