As the $65 billion broadband bill begins gathering dust in Congress, awaiting final passage along with the rest of the Biden administration's infrastructure bill and broader jobs-and-families plan, the lack of a permanent chair and full staff at the FCC threatens to derail important aspects of the country's plan for universal broadband before the new bill even becomes law.

The five-member body is down one commissioner, with an even split between Democrats and Republicans, and it is still being helmed by an acting chair, Jessica Rosenworcel, one of two Democrats on the committee. Rosenworcel is already on borrowed time: Her FCC term expired in June 2020, so she will have to depart the agency in January if she doesn't get confirmed as Chair before that. President Biden has yet to nominate anyone to fill the empty commissioner slot, or moved to confirm or replace Rosenworcel as chair  to the dismay of many in the industry.

"The Biden Administration will get nothing done on broadband, a critical service as important as water and electricity to people, without a fully staffed-up FCC," says Ernesto Falcon, senior legislative counsel at the Electronic Frontier Federation. "The delay in appointing not one but now two Commissioners to the agency, from his own party, while in control of the Senate, is nothing short of a disaster. Issues such as digital redlining, low-income access, net neutrality, and competition are all being sidelined by the Biden Administration's unwillingness to appoint a working majority."

If Biden fails to successfully get the remaining commissioner slot and a permanent chair confirmed before the end of the year, junior Democratic Commissioner Geoffrey Starks will become acting chair  and the FCC will gain a Republican majority.

Blair Levin, former chief of staff to FCC Chairman Reed Hundt under President Clinton, and executive director of the National Broadband Plan under President Obama, stresses that  even more than the threat of losing its Democratic majority  the FCC's lack of a permanent chair and full staff are preventing the agency from doing crucial work to "get smart" on broadband policy.

"The best advice I got for being chief of staff was to make sure that for every problem the FCC was addressing there was some appropriately talented person who went to bed at night and woke up in the morning believing that his or her professional reputation would be set by how the FCC dealt with the problem," says Levin. "Without a permanent chair, no one currently working at the FCC  as wonderful as many of them are  has that kind of motivation." 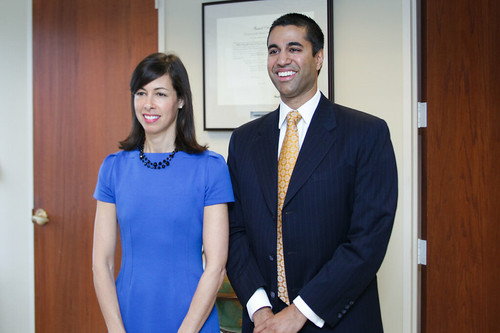 Current Acting Chair of the FCC Jessica Rosenworcel, and former Chair Ajit Pai, at their swearing-in ceremony in 2012. Rosenworcel has been notoriously critical of Pai's leadership at the agency, calling his cheery assessment of the nation's broadband progress in 2020 "baffling."
(Source: FCC via Flickr)

Levin notes that, in the spirit of fairness, the Biden administration has been preoccupied with myriad crises "much more significant than anything the FCC would do." But ten months in, and with the legislative year reaching its close, the lack of a complete staff or permanent chair means the agency is behind on owning, addressing and fixing its broadband programs.

One of those is the Emergency Broadband Benefit program (EBB), currently providing subsidies to over 6 million enrolled, low-income homes. The program, established through the American Rescue Plan in response to the pandemic, is set to expire when the funds run out, or six months after the Department of Health and Human Services declares an end to the COVID-19 health emergency. But the $65 billion broadband bill would have the FCC establish a similar program on a permanent basis: a provision cheered by advocacy groups like the National Digital Inclusion Alliance (NDIA) and the National Urban League.

Without a permanent chair, however, Levin argues the agency is losing time to meaningfully evaluate and improve upon the EBB and other essential broadband programs.

"One of the most important tasks of the FCC over the next few years is likely to be the creation of a program offering permanent subsidies for low-income persons to obtain broadband services," says Levin. "The FCC has already created a prototype of such a program with the Emergency Broadband Benefit. If there were a permanent Chair, the Chair and the staff would be in discussions with stakeholders regarding what worked, what didn't work, and how to improve the program. But now the incentive is to only have discussions about how great the EBB rollout has gone.

"That is not criticism of the Acting Chair," he says. "It is just the natural consequence of the program being part of her campaign for Chair rather than her legacy as Chair."

In an email to Broadband World News, an FCC spokesperson shared the following comment on the impact of the delays on the agency's work:

"Since late January under acting Chairwoman Rosenworcel's leadership, the FCC set up in record time the country's largest broadband affordability program enrolling more than 6.4 million eligible households in the Emergency Broadband Benefit Program to date, launched the nation's most expansive effort to close the Homework Gap with over $5 billion in first-round applications for the Emergency Connectivity Fund, reinvigorated the agency's focus and actions on combating the consumer plague of robocalls and unwanted communications, continued the rapid deployment of 5G networks with the current 3.45 Ghz auction taking place as we speak, and made significant progress to advance the agency's broadband mapping efforts in the last 10 months."

The White House did not respond to a request for comment. But a group of 25 Democratic senators from 17 states recently made their feelings known to President Biden in a letter urging him to nominate Rosenworcel to become the permanent FCC Chair, stating that there is "no better qualified or more competent person to lead the FCC at this important time than Acting Chair Rosenworcel."

Additionally, they argue, any other nominee besides Rosenworcel will face months of gridlock in getting confirmed by Congress  whereas Rosenworcel was previously unanimously confirmed  and in getting the agency fully staffed and up to speed.

"Given this once-in-a-lifetime opportunity to ensure all people have access to broadband, it is absolutely essential that there are trusted, qualified appointees leading these agencies to coordinate the deployment effort across your administration. Accordingly, the decision to nominate Acting Chair Rosenworcel to a full term as Commissioner and designate her as the permanent Chair of the FCC can no longer be delayed," states the letter. "Further delay simply puts at risk the major broadband goals that we share and that Congress has worked hard to advance as part of your administration's agenda."

Like what we have to say? Click here to sign up to our daily newsletter
COMMENTS
Newest First | Oldest First | Threaded View
Add Comment
Be the first to post a comment regarding this story.
EDUCATIONAL RESOURCES
sponsor supplied content
Small cell densification for 5G
Which Path to Convergence Is Right for You?
Helping FTTx Networks Like Yours
Educational Resources Archive
More Blogs from Broadband World News
Senators press Sohn, Davidson on how they'll implement broadband bill