Mobile and fixed wireless will continue to fit prominently in AT&T's network strategy, but backing those networks with fiber and using new fiber-based networks to reach millions of additional locations is also going to remain a big part of the playbook.

AT&T plans to deploy fiber-to-the-premises (FTTP) to another 3 million-plus residential and business locations across more than 90 metro areas in 2021, and is already sizing up plans to push that to an additional 4 million locations in 2022, Jeff McElfresh, CEO of AT&T Communications, said today during the company's investor day event.

"The margin economics are attractive," he said. "These areas are adjacent to our current footprint, driving cost efficiencies in our build as well as our marketing and distribution efforts."

Future rollout pace will depend on how successful AT&T is with the next tranche of fiber being deployed in 2021. McElfresh expects to see fiber subscriber volumes rise in the back half of the year after the initial buildouts, but added that he already likes what AT&T is seeing in the early part of 2021. The company noted that about 70% of its gross broadband adds in fiber buildout areas are new to AT&T.

"And if we keep up with that pace, our vision would be to have over half of our portfolio, or 50% of our network, covered by that fiber asset," he said. "As our integrated fiber plan improves the yield performance on that fiber it will further give us conviction on continuing that investment in the coming years."

AT&T is also looking to broaden its reach of fiber amid rising data demand and network usage that has occurred during the pandemic, and isn't expected to stop any time soon.

Mirroring trends seen elsewhere, AT&T data showed a big jump in broadband data demand in the upstream and the downstream during the pandemic. The surge was particularly stark for AT&T's fixed network, with monthly usage per sub rising to 317.7 Gigabytes. 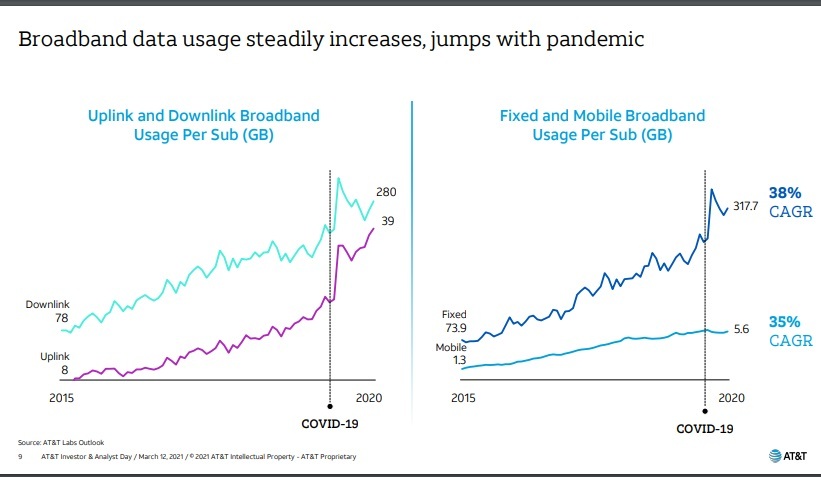 AT&T also anticipates monthly data usage to keep climbing. Usage among mid-level users is expected to rise to 1.5 terabytes per month by 2025. The company also sees data demands becoming increasing symmetrical, with the ratio of downlink to uplink usage moving from 10:1 today, to about 5:1 by 2025. 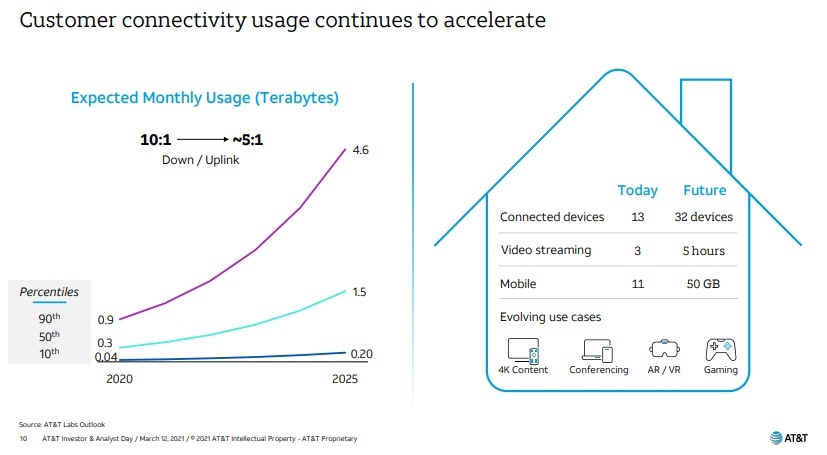 John Stephens, AT&T's outgoing CFO, suggested that the company might also be in position to meet some of that anticipated demand by upgrading some of its fiber-to-the-neighborhood VDSL network (for U-verse) to FTTP.

McElfresh noted that fiber upgrades will also help AT&T offset the pressure of its declining, legacy copper/DSL business. He also talked up the potential for AT&T to use its new C-band and other midband spectrum to reach segments of its footprint with a fixed wireless service.

"We may catch many of those [DSL customers] with a wireless offer that we've alluded to and we actually offer today in many markets," he said.

Though fixed wireless and new C-band spectrum will offer a way for AT&T to reach some areas with higher speeds more economically in "limited use cases," McElfresh also was clear that this this won't be the primary focus to handle heavy broadband data demand.

Though AT&T sat on the sideline during phase I of the Rural Digital Opportunity Fund (RDOF) auction, company CEO John Stankey said AT&T could end up taking a closer look at the rural opportunity if it likes what it sees from federal regulators.

With more potential government subsidies on the horizon and work on improving the broadband mapping system underway at the FCC, Stankey left the door open.

"There's no reason to assume that AT&T can't participate in those things moving forward," he said. "I wouldn't look at past behavior necessarily as being the indicator of the future."