Britain's broadband capitalists would have been choking on their muesli this morning after the country's wrinkly versions of Fidel Castro and Che Guevara signaled their revolutionary intent with plans for the nationalization of broadband infrastructure. Jeremy Corbyn, the Labour Party leader, and John McDonnell, his sinister comrade-in-arms, will then force Apple, Google and other foreigners to pay for UK citizens to enjoy free broadband services for life.

The scheme has been unveiled ahead of a UK general election on December 12. And make no mistake: As plans go, this one is radical with a capital R and communist-red font.

Labour is presenting it as the solution to Britain's big broadband problem -- that is, the country's disappointing performance on the rollout of "full-fiber" networks that can support extremely high-speed connections. Like the current Tory government, it has noted that just 8% to 10% of UK homes are hooked up to these networks, compared with more than 90% of properties in Japan, South Korea and even harder-to-serve European markets such as Portugal and Spain.

A Modern-Day Guevara and Castro 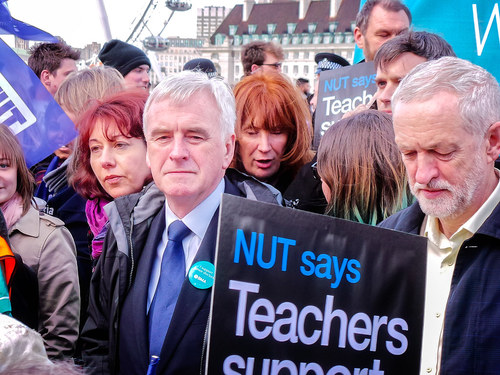 John McDonnell (left), the Labour Party's shadow chancellor, stands next to Jeremy Corbyn, its leader, at a demonstration.

But its proposals have nothing in common with the government's. Boris Johnson, the UK's prime minister, is targeting ubiquitous full-fiber coverage by 2025. To get there, he is promising £5 billion ($6.5 billion) in funding for the 20% of the country that is hard to reach. The burden elsewhere will fall on the private sector. That is already enjoying a boost and the inflow of funds pulled together by the likes of Goldman Sachs. BT, the biggest network operator, is optimistic about an easing of regulation under the Tories.

In bringing forward a target for nationwide full-fiber coverage by eight years, Johnson has been mocked by industry figures who think he is oblivious to the challenges, ignorant of the technology or just plain barmy. But Labour's plans make Johnson look like the sanest inmate in the asylum.

About the only sensible feature of the new plan is the scrapping of the 2025 full-fiber target: Instead, Labour is aiming for 2030. It says it will do this by taking most of BT's non-mobile business into government ownership and renaming it British Broadband -- a throwback to the 1970s era of state-backed national champions whose workers were usually on strike. British Broadband would then receive government funds of about £20 billion ($25.8 billion) to cover deployment costs.

Most of this £20 billion ($25.8 billion) would come from Labour's mysterious "Green Transformation Fund," a £250 billion ($323 billion) money pit that Corbyn will fill by issuing long-dated government bonds, driving borrowing costs up to giddy levels. The £20 billion ($25.8 billion), moreover, seems unlikely to be enough. TechUK, an association that represents UK broadband stakeholders, reckons the private sector could do it for £30 billion ($38.7 billion). And public-sector projects usually end up costing way more than initial estimates.

British Broadband, in the meantime, will be offering free broadband services for all. Free, that is, in the sense that consumers in the debt-burdened country will not have to pay directly. The operator will cost about £230 million ($297 million) a year to maintain, according to Labour, but those expenses will be covered by new and stringent taxes on "multinationals." In other words, Apple, Google and other technology giants will be made to cough up for the broadband needs of UK citizens. A capital flight seems likely.

After the initial shock, BT's shareholders did not seem too fazed. In London, the operator's share price was down only 1.5% in early-afternoon trading, and it is a fifth higher than it was in August. The shrug-of-the-shoulders response may reflect views that Labour under Corbyn (or McDonnell, the hard-left shadow chancellor) stands no serious prospect of winning an election. Opinion polls this week put the Tories ahead by some margin.

TechUK, nevertheless, says Labour's nationalization plans would be a "disaster" for the UK's telecom sector. "Renationalization would immediately halt the investment being driven not just by BT but the growing number of new and innovative companies that compete with BT," said CEO Julian David in a statement.

For BT, it would throw up all sorts of complications regarding the pension covenant and the separation of assets. Dividing the parts of BT that Labour has identified for public-sector ownership from the rest of the business will be like operating on conjoined twins who share organs. Labour says it will guarantee jobs for all existing infrastructure and retail employees. Yet BT is only partway through a plan to cut 13,000 roles and looks highly inefficient next to regional peers. With its current headcount, it may struggle to remain afloat in a future digital economy.

Other broadband companies have cause to worry, too. Labour has indicated it will acquire the "necessary access rights to the existing 8-10% of full-fiber assets," which will affect companies like CityFibre, the Goldman Sachs-backed venture determined to become a national wholesale rival to BT. CityFibre did not respond to questions about the possible nationalization of its own infrastructure under a Labour government.

Johnson has reportedly (and predictably) lashed out at the Labour proposals as "a crackpot scheme," while BT CEO Philip Jansen told the BBC that Labour had underestimated the cost of its plans. Some industry players, meanwhile, are clearly wondering how they can fit in. "A national broadband project like the one Labour proposes is a massive and challenging undertaking," said Olivier Tremblay-Lavouie, the portfolio marketing leader of EXFO, which develops fiber-optic testing solutions, in emailed comments. "Regardless of who builds it, the network will need proper testing, monitoring and assurance."

Evan Dixon, the managing director of satellite company Viasat Europe, was similarly keen to mention his own organization's technology of choice. "Supporting the connectivity itself -- including investment in faster fiber and satellite technologies -- will boost the UK and provide capabilities that can be used across government," he wrote in an email.

Some observers have made the mistake of seeing Labour's proposals as just another national broadband plan, akin to Australia's infamous attempts to build a state-funded wholesale network. That project has been controversial ever since it began, costing Australian taxpayers billions more than originally expected. But next to Corbyn's proposals for a nationalized network and retail business -- offering free services at the expense of US technology giants -- it seems like a moderate fix. The UK telecom industry must pray the next government is not led by Corbyn.