Scared because of what open RAN could mean for old-school operators like Telefónica if they fail to adapt to it quickly.

In Japan, where it is building a fourth mobile network, Rakuten insists that open RAN's lower costs have allowed Rakuten Mobile, as its telco subsidiary is named, to sharply undercut its rivals on price.

For those competitors, the danger is that a tsunami of their customers eventually flows into Rakuten's expanding network.

Yet Blanco is clearly excited by Rakuten's defiance of the open RAN critics, who continue to argue the technology is insecure, unsophisticated and even more expensive than traditional radio access network (RAN) technology. 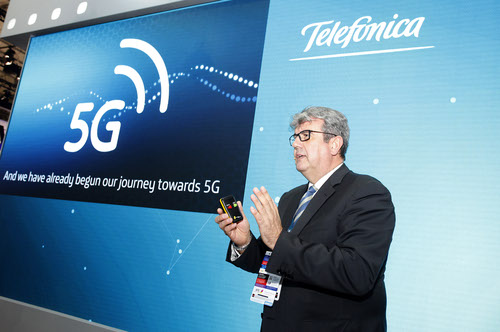 In an exclusive article for Light Reading, Blanco had already described his open RAN vision, promising that up to 50% of Telefónica's RAN investments between 2022 and 2025 would be in open RAN technology.

Now he has joined forces with Rakuten to help make it a reality.

All about the economics
He and Tareq Amin, his counterpart at Rakuten Mobile, today announced a wide-ranging open RAN partnership that could provide an important blueprint for the industry.

It also sounds like a fillip for Altiostar and other vendors building Rakuten's networks.

That is because one of its key elements will entail joint procurement of open RAN hardware and software, including the components used at central, distributed and remote radio units.

The basic idea is to boost the open RAN ecosystem and give it some of the scale economies that traditional vendors already enjoy.

And because Rakuten has already chosen its vendors, and launched a commercial network Blanco admires, that would mean Telefónica swinging behind many of the same companies.

"For sure," said Blanco, when asked by Light Reading if this was so.

"All the experience that Rakuten has with these providers will be critical for us  It is not only about antennas but also about the software business and the OSS [operational support services] evolution."

At the forefront of this bunch is Altiostar, a US software company in which both Rakuten and Telefónica have made investments.

Its open RAN software already powers hardware provided by KMW and Nokia in Rakuten's 4G network. Starting later this month, it will also be used in conjunction with 5G radios provided by Airspan and NEC.

And it now looks set to figure in a future Telefónica deployment.

"We decided with the Altiostar solution that it is an extremely relevant software provider and a significant part of open RAN," said Blanco during a Zoom call with reporters this morning.

"We will be closing with the Altiostar guys a deal, but we will be cooperating with Rakuten."

Rakuten's roll call of vendors is longer than most of yesteryear's tradeshow exhibitor lists.

Some have a more obvious role than others. Intel, for instance, is providing its Xeon processors for use on Quanta servers. In small cell deployments, Qualcomm is providing chips.

India's Tech Mahindra, another investor in Altiostar, is the systems integrator for the entire project.

But Telefónica has also called out some other vendors it is likely to use during a future open RAN deployment.

Servers based on Intel's X86 platform might come from Super Micro, another Telefónica partner.

For both the Japanese and Spanish operators, the main objective is to lower the cost of open RAN components in a kind of sub-ecosystem, according to Gabriel Brown, a principal analyst with Heavy Reading.

"You need to get the scale economies of a big vendor applied across a multivendor deployment," he says. "One of the ways that seems to be happening is through little ecosystems within the wider open RAN ecosystem."

"You might see two, three or four operator-led open RAN ecosystems, often involving similar players in each but not completely mapping across," he adds.

O-RAN-compliant?
All this comes amid growing industry concern about fake open RAN  deployments in which vendors have been able to work together and guarantee interoperability without using the interfaces defined by the O-RAN Alliance, the main specifications group.

"One of the things we are wondering is how much of the market will be O-RAN-compliant versus just multivendor, and how multivendor it will be," says Brown.

The development of ecosystems within an ecosystem sounds like a potential threat to a global standard.

Within their own little club, Telefónica and Rakuten hope they can steer vendors through "jointly developed proposals." They also plan research into the use of artificial intelligence.

Yet they insist one of their goals is to avoid industry fragmentation, and Amin rejects any suggestion they would do anything that "doesn't follow the standards."

"We belong to the same industry forums that are helping to define what these standards look like and how they evolve," he said.

"What makes open RAN slightly more complicated is how to create jointly together the necessary O-RAN-compliant hardware that we need to manage software on this network, the creation of an entire ecosystem around this."

Amin is now promising "no delay at all" to the launch this month of Rakuten's 5G service, based on radio gear developed by Airspan and NEC.

As for Telefónica, open RAN pilots are already underway or planned in the major markets of Brazil, Germany, Spain and the UK.

A "massive deployment" in one of those markets will start by the first quarter of 2022, says Blanco.