Open RAN's a winner, UK decides, as it closes door on Huawei

In a perfect world, he told UK politicians last month, operators would have a choice of multiple suppliers, some open and some traditional, as they look for alternatives to Huawei, Ericsson and Nokia, the dominant providers of radio access network (RAN) technology.

"Let the best man win as long as there are a lot of them," he emphasized.

Yet the British government increasingly appears to have decided the best man is open RAN. Its latest proclamation on 5G diversification reads like a paean to the hyped technology, which excites policymakers and service providers alike.

Open interfaces that promote interoperability should be the default, it says. Cue plans for an open RAN deployment next year with NEC, a Japanese vendor drawn to the UK, as well as a new test center, christened SONIC, for open RAN technology. 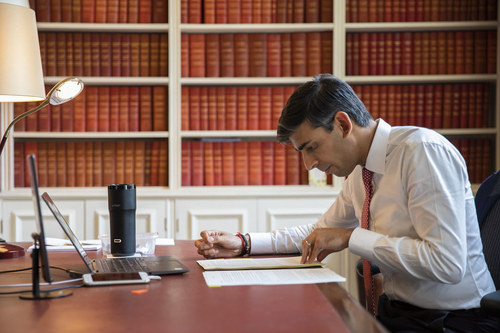 UK Chancellor of the Exchequer Rishi Sunak figures out what is available for telecom.

Authorities are simultaneously tightening the screws on Huawei. In January, UK service providers were told they must comply with a 35% cap on Huawei products in the 5G RAN by January 2023. By the end of 2027, 5G networks must include no Huawei products whatsoever, said the government in July.

The latest move will forbid the installation of Huawei products starting in September next year. That is a potential blow if operators have this year bought Huawei equipment intended for a future upgrade.

Open RAN holds the UK government in thrall. The chances of creating another traditional vendor like Nokia are close to zero, Livingston told authorities in October, while "openness" has topped the list of telco demands for years.

Today's vendor "lock-in" means all the RAN products for a particular site must come from the same supplier, operators grumble. With open RAN, they could use radio units from one supplier with RAN software from another.

But government intervention worries those who believe the market should decide. Dean Bubley of Disruptive Wireless is one industry analyst concerned authorities may go too far.

"My view is that governments should, in general, let technology markets, vendors and suppliers make their own choices," he writes in an article posted on LinkedIn.

"Governments can certainly choose to adopt or even incentivize interoperability for various reasons  but they should not enshrine it in laws as mandatory."

This, however, is exactly what Timotheus Höttges, the CEO of Germany's Deutsche Telekom, would like to see his own government do.

While the UK has so far stopped short of legislating for openness, its reference to interoperability as the "default" may raise a few hackles.

It seems to ignore the trade-offs attached to open RAN, which still cannot match the performance of traditional technology. Nor is it obvious that an open RAN market comprising numerous players is sustainable.

Consolidation has left the industry with three giant vendors. What about openness would stop this from happening again?

The UK government even acknowledges that its Huawei ban will strengthen Ericsson and Nokia in the immediate absence of an alternative, open RAN or otherwise.

It seems willing to settle for this in the hope that open RAN will eventually be disruptive. There is, of course, no guarantee. If Ericsson and Nokia grow more powerful in the next few years, smaller rivals touting open RAN could find dislodging the duopoly even harder.

The Nordic vendors have already emerged as the main beneficiaries of the war on Huawei. BT previously used Huawei across two thirds of its RAN and Nokia for the rest. It is retaining the Finnish vendor and introducing Ericsson as it phases out Chinese products.

Three, the UK's smallest operator, had picked Huawei as its sole 5G vendor. This year it announced a deal with Ericsson as a second supplier. Susan Buttsworth, Three's chief operating officer, says open RAN does not currently figure in the plans.

With O2 already dependent on Ericsson and Nokia, Vodafone is the only service provider that has announced a serious open RAN commitment. Its plan is to substitute open RAN for Huawei at about 2,600 mobile masts in the west of the UK. If all goes well, a major rollout is expected to begin by 2022.

Authorities today named some of the companies that might play a role in open RAN deployment. South Korea's Samsung, Japan's Fujitsu and US-headquartered Mavenir and Parallel Wireless are all identified in the latest government update.

It is NEC that hogs the limelight, however. Next year, an NEC project dubbed NeutrORAN will test a "neutral host solution," meaning a network that can be used by multiple service providers, in Wales. The government is to invest £1.6 million ($2.1 million) in the scheme.

Announced soon after NEC said it had picked the UK for its "Global Open RAN Center of Excellence," that public-sector commitment is probably small enough for authorities to evade any criticism about unfair state aid. But the government's repeated courting of the Japanese firm is highly questionable.

"We see this project as a catalyst for NEC introducing open RAN into the UK and enabling the acceleration of 5G deployment," said Chris Jackson, the CEO of NEC Europe, in prepared comments that could aggravate his rivals.

Telco executives might be alarmed, too. They have previously urged authorities to back research into and development of open RAN. The creation of a government-backed trial network that could eventually morph into a more substantial offer is probably not what some had in mind.

Governments do best when they create the right conditions for investment and innovation and avoid picking any winners, whether those are specific technologies or individual firms. Right now, the UK looks seriously in danger of overstepping the mark.