MWC22  Abdu Mudesir has one of the longest to-do lists in telecom. Appointed chief technology officer of Deutsche Telekom in January, he presides over a continental tangle of European networks that snake through Germany and much of central Europe. Open RAN, the rollout of standalone 5G and the software transformation of Deutsche Telekom's technology units are just a few of the jobs that lie ahead.

It is the first that has grabbed much of the industry attention in recent months, though. Deutsche Telekom is one of several big European operators that have thrown their collective weight behind open RAN. Like the others, it is pushing suppliers for more interoperable products, allowing one company's radios to be married to another's baseband. Today's "closed" interfaces make that difficult, it says.

The technical challenges appear considerable. Because open RAN is usually accompanied by virtualization  allowing network software to be deployed on common, off-the-shelf servers  they include the unsuitability of general-purpose processors (GPPs) for the heavy baseband (or Layer 1) needs of urban 5G deployments. Customized silicon simply looks more energy efficient.

"When you go to GPP, you usually face a big challenge  eating up energy," Mudesir told Light Reading at this week's Mobile World Congress (MWC) show in Barcelona. "In the DU [distributed unit] part of baseband is 70% of consumption and most is the CPU [central processing unit]."

But Mudesir now hails something of a breakthrough with Intel, the provider of most CPUs. It has not come thanks to any hardware customization, including the use of so-called "accelerators," but through improvements to FlexRAN, the software Intel develops. "What we have done is continue with an Intel collaboration on Layer 1 FlexRAN and further develop that to make it really energy efficient," said Mudesir. 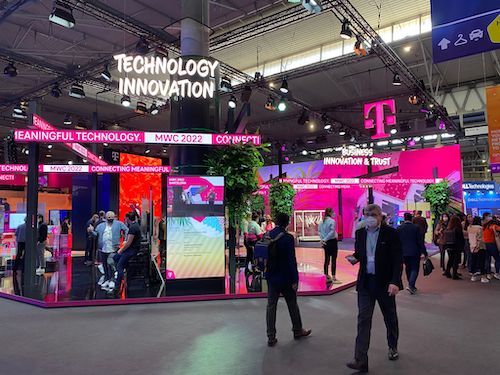 The expertise contributed by Cohere, an Intel-funded startup that Deutsche Telekom has called out during trials, looks critical. Cohere specializes in "beamforming," a technique that essentially transforms wireless signals from floodlights blanketing an area into lasers focused on end-user devices. Its software can sit on a cloud-computing platform (provided by VMware during the trials) or be integrated with basestation technology.

"Intel is helping us and we are helping Intel," said Ray Dolan, Cohere's CEO. "We think we can help to further improve uplink and reduce power consumption and allow them to play not only on the basestation side but in the data center, too." If software developed by Cohere and Intel can offset the energy cost of GPPs, operators might be able to make do without expensive hardware "accelerators," designed to improve performance, he said.

Mudesir has been impressed. He claims performance is now "approaching comparable" with a traditional RAN, although the industry will undoubtedly be skeptical until Deutsche Telekom is able to demonstrate results commercially. Other parts of the industry remain focused on developing accelerators to relieve the CPU of its Layer 1 burden. In the run-up to MWC, new products were unveiled by Marvell and Qualcomm, chip-making rivals to Intel.

The multivendor set-up to which he refers took place in the German town of Neubrandenburg, christened "O-RAN Town" by Deutsche Telekom. Trials have involved NEC, a Japanese firm providing massive MIMO radio units, and Mavenir, a US company developing baseband software. Finnish equipment giant Nokia is also participating in the effort, among others.

It is in this type of set-up where accelerators may be needed, although Mudesir is not wedded to any specific variety. Two methods have emerged  lookaside, which shifts some functions onto the accelerator but continues to rely heavily on the CPU, and inline, which bypasses the CPU entirely. Unsurprisingly, Intel seems to prefer the former, while Marvell, Qualcomm and other Arm-based rivals are focused on inline. "We are open," said Mudesir, happy to see choices. "It depends on performance and cost."

Making one vendor's hardware synchronize with another's software is evidently doable  Nokia has already done this with Japanese mobile operators NTT DoCoMo and Rakuten Mobile. But the integration effort is tough, according to Tommi Uitto, the head of Nokia's mobile business. "Massive MIMO is extremely difficult because the specifications mean there are too many implementation options," he said. "If two different suppliers have different options, it is difficult to marry one's baseband with another's active antenna."

Nevertheless, Deutsche Telekom has launched a request for quotation and believes products may be ready for commercial use next year. Mudesir also dismisses the suggestion this will be very limited in scope. "We are not talking about small cells  we are in a position to do that today," he said. "It needs to be significant enough to allow us to really test operational systems and so it is not small pieces. We are talking about covering city deployments."

How this happens is currently hard to imagine. Deutsche Telekom has already built a 5G network covering 90% of the German population, it said in its last earnings update. Deploying open RAN could mean either duplication or costly replacement. Nor does open RAN cater much for 2G and 3G. France's Orange this week announced plans to switch off those technologies across Europe, partly to ease the deployment of open RAN. But it does not expect to finish the job until the late 2020s, if not 2030. 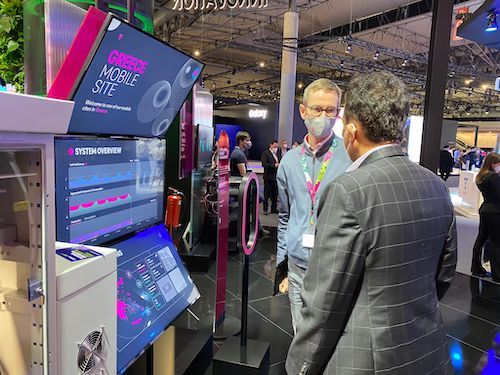 Eagerly showing off technologies at the first physical MWC since 2019.
(Photo by Fiona Graham)

"It is important to understand that there is lifecycle modernization," said Mudesir, when asked about the upgrade. "We won't do something that is not fitting with that cycle." One possibility is densification through open RAN, if it can be made to interoperate with the traditional network that surrounds it. Deutsche Telekom appears to have relied heavily on dynamic spectrum sharing to divide low-band airwaves between 4G and 5G and blanket wide areas. Only 1,200 of its 20,000 5G sites use mid-band technology. And it has been adding to its site footprint.

Investment in a "cloud RAN" would allow baseband equipment that has been consolidated in a facility to serve multiple radio units. It brings the possibility of cost savings but is not an immediate objective for Mudesir. "Our priority is to open up the interface," he said. Deutsche Telekom would need to figure out if future cost savings would pay for the fronthaul investment needed to connect baseband facilities to mobile sites. "We are looking at a dark fiber deployment," said Mudesir.

The industry will be watching closely for the winners of open RAN contracts with Deutsche Telekom, which today buys all its traditional RAN products from Ericsson and Huawei. Recent mention of Mavenir and NEC by Claudia Nemat, Deutsche Telekom's board member for technology and innovation, will be taken as a positive signal by those companies. Nokia is also in the mix. But increasing the number of suppliers could add cost and complexity for operators, according to Neil McRae, the chief architect of the UK's BT.

"We don't want to exclude Nokia or Samsung or Ericsson," said Mudesir. "Our main target is not to have so many vendors in the network but to have more vendor choices to deploy." Extra competition, though, means somebody will lose out unless the market is growing. And Omdia, a sister company to Light Reading, forecasts revenue shrinkage between now and 2025 as operators cut spending on older standards.

It possibly explains some of the verbal fisticuffs at MWC. Early in the week, Nokia accused open RAN challengers of being unwilling to collaborate and not truly open. Taking that to be a criticism of Mavenir, executives at the US firm immediately hit back during an interview with Telecoms.com, Light Reading's sister publication, calling Nokia the impediment. It hardly presages a market of smooth and harmonious interoperability.