The Linux Foundation today made its long-awaited formal announcement of the Open Platform for NFV Project (OPNFV), promising to deliver a carrier-grade, open source reference architecture as a means of speeding up NFV deployment. The group's initial focus will be on developing the NFV infrastructure and virtualized infrastructure management, two key pieces not already under development, and is promising its initial results in the first half of 2015. (See Linux Foundation Announces Open NFV Group, Exclusive: Leaked 'Inception' Document Fleshes Out Open-Source NFV Plans and Will Carriers Step Up to Open Challenge?)

OPNFV, which includes some but not all of the pioneering telecom operators behind the European Telecommunications Standards Institute (ETSI) group which created NFV as a concept, was first discussed publicly last spring, but has been holding its cards close to the vest on details until today. In briefings in advance of the announcement, Linux Foundation Executive Director Jim Zemlin said the new organization will build on existing open source projects, including OpenDaylight , Linux and OpenStack , but will be significantly different from those in its intent.

All of those projects are what Zemlin terms "upstream projects" focused on specific components, while OPNFV is more focused on the underlying architecture and how that is going to be developed. In that respect, the new group is more similar to Debian or Fedora from the Linux world -- both of those are operating systems based on free or open source software that were later integrated into commercial deployments.

"This group wants to focus on NFV specifically and on creating a carrier-grade environment," Zemlin says. "That involves integrating a collection of open source components together but it also has a much broader scope in terms of looking at things like hardware acceleration and service chaining all of the things you need in an NFV environment, which are broader than the scope of any of the individual components that are part of open source projects."

Notably absent are Telefónica SA (NYSE: TEF), which has openly called for an open source approach to NFV-I and virtualized infrastructure management, as well as BT Group plc (NYSE: BT; London: BTA) and Verizon Communications Inc. (NYSE: VZ), who played prominent roles in the ETSI NFV ISG. Zemlin says he expects more network operators to join the project, once they see its direction, and thinks some operators are still unfamiliar with open source development in general or don't have R&D organizations that can operate externally as part of an open source group, delivering useful code. (See Telefonica's Push for Open NFV Infrastructure, VIM.)

"They need to understand how to engage -- the intellectual property frameworks, the development process, etc.," Zemlin says. "We are engaging with a lot of those folks right now. So I think you'll see more come into the organization rather quickly."

The OPNFV reference platform is intended to provide consistency, interoperability and performance among the open source components that will be involved, and the group will be working with the other groups to continuously share information and carry out integration and testing, Zemlin said.

According to the Linux Foundation's announcement, the project's initial objectives include developing "an integrated and tested open source platform that can be used to investigate and demonstrate core NFV functionality", as well as proactively engaging end-user companies for their input and establishing an open NFV ecosystem, and promoting its own efforts.

"What we expect to have is a baseline reference implementation that companies will 'productize' and you'll see it deployed in some commercial environments," Zemlin says.

The first project developers' meeting takes place this week and the group will decide, among other things, how and where the developing reference architecture will be tested -- whether it happens in operator labs, vendor labs or within the Linux Foundation. Zemlin expects code contributions from multiple parties, including network operators, to kick off the development. Many of the early service provider participants are among the more "progressive" in terms of having their own software development efforts, he notes.

And alas I am Chart Impaired. A handicap in this industry, to be sure.
Reply | Post Message | MESSAGES LIST | START A BOARD

I would hesitate to call this effort a smoke-screen, however,

And you are right, IT skills are definitely what's needed. That shift is happening within every major telco I talk to - is it happening fast enough? I don't know.

There's a reason why this effort is being coordinated with the Linux Foundation and not the ITU.
Reply | Post Message | MESSAGES LIST | START A BOARD

cnwedit 10/3/2014 | 8:43:38 AM
Re: Open NFV Platform Plan We didn't specifically get into the API discussion but APIs are a fundamental part of all this work. There have to be both northbound and southbound APIs well-defined for all of this to work.
Reply | Post Message | MESSAGES LIST | START A BOARD

acarrilloa 10/3/2014 | 8:01:37 AM
Carrier grade? While we, I work for a major carrier, worry about certification of "carrier grade" products and solutions, the likes of Google, Microsoft, Amazon continue deploying cheap tailor made infrastrucutre in highly efficient DC that provide "customer grade" quality of service.

The ecosystem of the telco business has shifted, but most of us and our traditional suppliers are still thinking that we can stop the tide by announcing and creating "carrier grade" smoke screens.

We need to work on practical solutions for which we lack the skill sets because telcos don't like IT and there is where the skills are.
Reply | Post Message | MESSAGES LIST | START A BOARD

Did the subject of APIs come up in connection with the Linux' folks announcement of a reference architecture? Only asking because it seems to me the effort might include an API. Also interesting that not all of the Tier 1 carriers behind NFV have not yet lined up to support the OPNFV project--especially if it is not stepping on the toes of the ETSI NFV work.

cnwedit 9/30/2014 | 12:19:56 PM
Re: Open NFV Platform Plan I had hoped the story explained that, Mitch. OpenDaylight is developing an open source SDN controller that will be a key component and ultimately part of the virtualized infrastructure but what OPNFV is focused on is very different - the reference architecture for NFV. 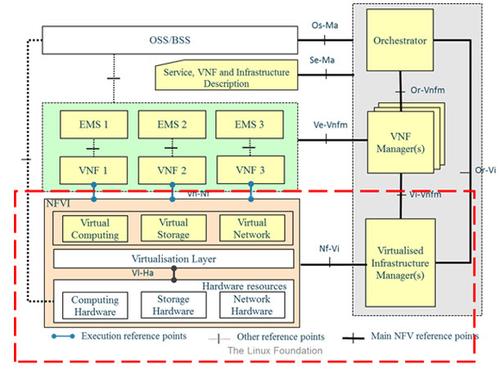 Mitch Wagner 9/30/2014 | 11:36:19 AM
Re: Open NFV Platform Plan I wonder how this is different from, and not competitive with, OpenDaylight. They're both open source platforms for network virtualization.
Reply | Post Message | MESSAGES LIST | START A BOARD

Gabriel Brown 9/30/2014 | 5:16:13 AM
Open NFV Platform Plan I've spoken to several operators about this inititative. Most like the idea and the intent, and see a value in a certification program, and so on.

Some question how much it will be able to achieve in practice, and how quickly. They also question the involvment of too many vendors muddying the waters.