Cities to FCC: Stop Undermining Us

Miguel Gamino is out. Not out as CTO of the city of New York -- he's not leaving that job until later in the month -- but out as a working group member within the FCC's Broadband Deployment Advisory Committee (BDAC). Following the lead of Sam Liccardo, the San Jose mayor who resigned from the BDAC in January, Gamino has tendered his resignation in a letter excoriating the committee's prioritization of industry interests over civic responsibility and the assurance of broadband equity.

Further, while Gamino is exiting from his CTO post in the coming weeks, the NYC representative says the city will not designate a replacement on the BDAC because of concerns over how the committee has handled its task of crafting recommendations for accelerating US broadband deployment.

The main issue that Gamino and other municipal leaders have with the BDAC is a worry that new state and municipal model codes under development by the committee will undermine cities' right to negotiate with telecom companies over how networking equipment is installed in their neighborhoods. Not only are city leaders concerned about bulky and unsightly gear on local "street furniture" (streetlights, bus stop fixtures, etc.), but they fear that if they give away access to public assets for free, they'll have no leverage to negotiate with carriers for broadband deployments in less profitable neighborhoods and regions. (See Pole Control Fight Gets Net Neutrality Nasty.)

As Gamino explains in his resignation letter, "I am concerned that the current draft of the [BDAC's municipal] code could lead to municipalities entering into agreements with wireless providers that are counter to the interests of their constituents. Most importantly, we do not believe that the recommendations will help close the digital divide." 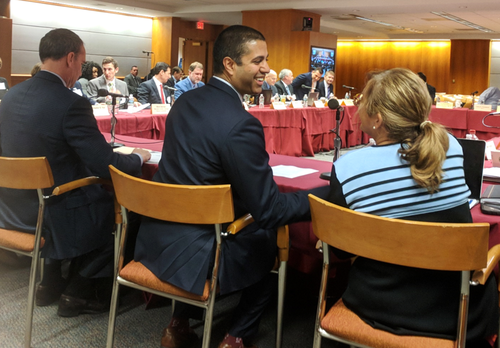 FCC Chairman Ajit Pai (center) meets with members of the BDAC, a committee he created with a mission to accelerate broadband deployments across country.

The argument over pole attachments is a major one because of the volume of small cell equipment the telco industry will need to install in cities to launch 5G wireless services. Industry advocates point out that bureaucratic timelines and fees are stalling further broadband deployments and making it impossible for network operators to give consumers the services they want. But at the same time, the telecom industry has not engendered much good faith with city officials because of failures to deliver on promises in the past.

For example, Verizon Communications Inc. (NYSE: VZ) has just now agreed to upgrade new locations in New York City with fiber after a lawsuit filed by the state asserted that the service provider hadn't met the build-out obligations of its contract with the city. (See NYC Charges Verizon With Fios Fraud.)

The state of New York also has a pending lawsuit against Charter Communications Inc. for providing lower broadband speeds than it originally agreed to deliver. (See NY State Sues Charter for Broadband Fraud.)

Latent anger against the telecom industry is starting to galvanize government officials outside of New York too. San Francisco Mayor Mark Farrell is now pursuing a publicly owned fiber infrastructure for the city because his administration is concerned about how much control the private sector has gained over broadband access. And other cities -- from Ammon, Idaho to Eugene, Oregon -- have deployed municipal networks because commercial operators have not provided the connectivity they say they need. (See Watch Out Telcos, There's a New Muni Broadband Wave on the Horizon.)

Ironically, the Federal Communications Commission (FCC) 's repeal of net neutrality rules, which was seen as a boon to the telecom industry, may have only served to further inflame local government opposition to telco demands. There was always going to be a battle over new small cell installations in advance of 5G. But, with the mounting worry by city leaders that Internet service providers aren't operating in the public interest, that conflict appears to be growing more acute.

kq4ym 4/17/2018 | 12:36:15 PM
Re: Ideally, allocation of property including communication licenses would be a State issue. That does seem a logical point of view to allow states to regulate communications, but I'm not sure that the long standing Federal rules will fall away anytime soon to allow that. While "prioritization of industry interests over civic responsibility and the assurance of broadband equity," seems to be rule of thumb at the agency now it's going to be awhile before the arguments on one side or the other actually take effect.
Reply | Post Message | MESSAGES LIST | START A BOARD