The Facebook-led Telecom Infra Project (TIP) has dropped a big hint that its efforts to build an open ecosystem for the radio access network (RAN) may soon be combined with the work being done by the Open RAN Alliance (ORAN Alliance) in a move that could address some concern about overlap between different industry initiatives.

The Telecom Infra Project (TIP) was set up in early 2016 amid frustration about a lack of innovation and high costs in the telecom equipment sector. It has brought together operators, traditional equipment vendors and startups on various projects that are using open source technologies and open approaches to overcome this inertia.

Some of its highest-profile activities are aimed specifically at the RAN, where the proprietary nature of several interfaces has stopped operators from using more than one vendor. The most notable is the CPRI (common public radio interface) technology that links radio gear with the baseband equipment used for processing signals. Because of CPRI, operators must usually buy radio equipment from their baseband supplier, say industry analysts.

However, the ORAN Alliance, which took shape earlier this year and now includes most of the world's Tier 1 service providers, has broadly the same objective. Formed from the merger of two existing industry groups -- the xRAN Forum and the C-RAN Alliance -- it has come up with an alternative to CPRI that might eventually spur the development of a "white box" market for radio gear. (See Why Resistance to the Open RAN May Crumble and Major Telcos Pool Efforts to Slash 5G RAN Costs.)

In other words, an operator would be able to buy off-the-shelf radios from a variety of different vendors to go with baseband technology from an entirely different supplier. This would reduce dependency on a single supplier (the dreaded vendor "lock-in") and could promise more competition and lower equipment prices. 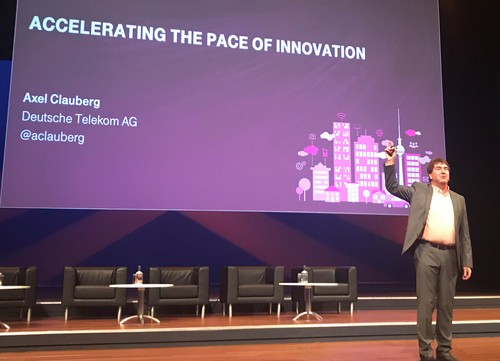 In the case of TIP and the ORAN Alliance, a close partnership (but not a merger) now appears imminent, Light Reading has learned. That's because Spain's Telefónica and UK-based Vodafone Group plc (NYSE: VOD), two of the operators involved with TIP's OpenRAN project group, would base their work on the "xRAN" specification developed by the ORAN Alliance, according to Clauberg.

"They have not done any specs from the ground up. They have not built architecture but are looking at how the architecture specified by the ORAN Alliance could be built and deployed in a commercial way," he tells Light Reading. "In this area, TIP would do solutions integration and prove it is possible to build such an open RAN in real life."

Vodafone and Telefónica have today announced the selection of vendors as "leading candidates" to produce these interoperable RAN solutions. The companies in question are Altiostar, Mavenir Systems Inc. and Parallel Wireless Inc. (See TIP Offers Progress Report at Summit.)

Both Altiostar and Mavenir were already listed as members of the xRAN Forum and Mavenir has previously highlighted the importance of the xRAN specification. "The specification exists and is fully defined in terms of protocols, and the O&M [operations and maintenance] piece is being added," said John Baker, a senior vice president with Mavenir, during Informa's 5G World Summit in London in May. "It is based on IP transport instead of expensive proprietary hardware."

TIP said the next stage would see Vodafone carry out field trials of OpenRAN platforms in Turkey, with Telefónica doing the same in Latin America.

Nokia is already a bona fide member of the ORAN Alliance. While Ericsson's involvement has not been confirmed, the Swedish vendor is now involved with the group, Light Reading has learned from a reliable source. Ericsson had not responded at the time of publication to a query about its membership status. (See Nokia Seizes Open RAN Initiative as Ericsson Holds Back.)

That would leave Huawei as the only one of the three big RAN vendors on the outside of the ORAN Alliance. Nokia, meanwhile, remains the only one to have joined TIP.

Nevertheless, an industry expert who preferred to remain anonymous said there would be a "legitimate concern" about TIP's ability to change the market if it ends up being dominated by the big operators and vendors. The same source had also anticipated a tie-up between TIP and the ORAN Alliance, arguing the latter is now the real driving force when it comes to open RAN technology.

In the RAN area, there is some hope the xRAN specification may eventually be adopted by the 3GPP as an alternative to CPRI, although Clauberg resisted any suggested that TIP is competing against the standards body.

"I wouldn't say this is competition to 3GPP but it is important to understand the relevance of global standards, because without them we wouldn't have interoperability," he said. "Sometimes there are global standards and you need acceleration and a standard doesn't necessarily say how you should build something. Opening up the RAN is not covered by the 3GPP but by the ORAN Alliance work and what we're driving here in TIP."

Greater openness could also help service providers to "virtualize" their RAN infrastructure. In a virtual RAN (or vRAN), an operator would run baseband processing functions as software programs on commodity servers, rather than dedicated equipment. This would allow them to aggregate hardware for greater efficiency. (See Is vRAN Still Too Hot to Handle?)

Another TIP group is exploring whether technologies like DOCSIS and G.fast could be used to support these "fronthaul" connections between radio units and baseband equipment. Operators without fiber networks have struggled to support connections over the CPRI interface, according to industry figures. (See Facebook's TIP Seizes vRAN Initiative From 3GPP.)

"CableLabs has done vRAN fronthaul over DOCSIS and BT is pushing for it over G.fast. There are other activities that are complementary to what has been done elsewhere," says Clauberg. "The challenge with fiber is that it is not globally available at the right price."