Full disclosure is fine provided the numbers do not reveal some awkward truths. If they show you are jacking up prices to compensate for a slowdown in unit sales, even though your products are not getting much better, an easy move is to stop publishing them.

Which is exactly what iPhone Inc (or Apple, as it prefers to be called) has indicated it will do in its next financial report. In its recent fourth quarter (covering July to September), Apple Inc. (Nasdaq: AAPL) sold nearly 47 million iPhones, a number that was little different from unit sales a year earlier. But the average selling price (ASP) of an iPhone soared 28%, to about $793. Thanks to that increase, Apple's sales were up nearly a fifth year-on-year, to $62.9 billion, with net profit rising 32%, to $14.1 billion. Had the ASP remained static, revenues would have grown just 4%. 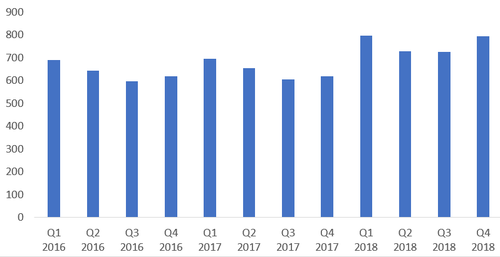 This is not the kind of scrutiny the world's most overvalued company wants, and so it has decided to be far less transparent in future. Starting in the first quarter of 2019, it will no longer reveal its unit sales for the iPhone. To make this all seem like a more considered, strategic move, Apple will also stop publishing details of unit shipments for iPads and Macs, which have similarly become more expensive. But few people care as much about the details of these products: Together, they accounted for just 18% of company revenues in the recent quarter.

Apple has presented this shift as part of its grand plan to focus on services, but investors are not buying that story. In pre-market trading on the Nasdaq, the company's share price was down about 6.6% at the time this story was published. The focus on services is surely not in doubt. But Apple can probably manage that while it continues to publish unit figures, any sane investor must think.

The reaction of Timothy O'Shea, an equity analyst with Jefferies, was not untypical. "Apple will also stop disclosing unit sales for iPhone, Mac and iPad, fueling fears it has something to hide," he wrote in a research note. "The new model is selling fewer higher-priced devices, but with more companion items in the cart and higher services attach rates."

If the reporting changes are a cover-up, the effort to focus less on gadgetry looks sensible. With the growing popularity of SIM-only deals, smartphone customers appear to have woken up and realized the latest handsets from Apple, Samsung Electronics Co. Ltd. (Korea: SEC) and every other top-end manufacturer are not a big improvement on last year's hardware. Once-excitable smartphone analysts now trudge between halls at Mobile World Congress grumbling about the lack of innovation. Samsung's answer is to develop a foldable device, it seems. Haven't we already had those with the clamshell phone?

Given the religious devotion it inspires in customers, Apple can demand exorbitant fees and still pull a massive crowd -- rather like an American TV evangelist. But this trick will be difficult to perform year after year, and especially if the smartphone eventually moves over to accommodate other types of device. Apple's own attempts to produce smartphone successors in the form of "wearables" have not been hugely successful. (See Apple's $1 Trillion Luxury Prison.)

But analysts are excited about the services business that sits on top of its devices empire. "Apple has now sold over 200 million iPhones [annually] for the last four years," said O'Shea, who maintains a buy rating on the stock. "To us, iPhone looks like a mature and stable business upon which Apple can now build a massive, higher-margin and higher-multiple services business."

That services business made nearly $10 billion in the recent quarter, with sales up 17% year-on-year. Apple is due to begin reporting gross margins for this business next year, which suggests it makes a decent profit. But continued growth here will be no cakewalk. The big beasts of Amazon.com Inc. (Nasdaq: AMZN) and Google (Nasdaq: GOOG) are chasing the same business, and their services work on products from any manufacturer, while Apple's are often restricted to its own goods. If Apple is to morph from a hardware into a services business, it may have to rethink some of its core principles. In the meantime, it can probably count on higher prices and loyal customers for earnings growth.

You are simply either missing the point or ignoring it.  Companies report on themselves in basic ways like revenue and profit.  They also report on numbers that are strategically important to the business.  They do this over time and with great deliberation.  The reason is that reporting on numbers once and never again is viewed as a Sales Tactic meant to convince the public to buy the stock.

Now here we are on the other side of things.  Numbers that have been reported for years are being removed.  Apple has every right to do so, but understand that analysts ask the question:  "Why?"  This creates uncertainty around the stock and people report on it.  Now cover-up and backlash are strong words.  But this is Lightreading a site that once reported that I hated Grandmothers (I can go find the article from about 2001 if you want me to).

So do analysts write with concerns when companies stop reporting on numbers that they used to?  Yes, yes they do.  They do it EVERY time unless there is a good reason to stop.  An example of the reason to stop would be Autodesk, where they completely changed how they did business.  This meant the old metrics were no longer valid.  Not the case with Apple.

trapdaddy 11/3/2018 | 11:38:15 AM
Re: Knuckle head on Apple Futures Not sure why comparing with oneself is not taken care of by presenting the numbers in terms of revenue.  Yes, compare Apple to apples is easy but comparing apple (phone sales) to its competitors is not so simple.  I get it but I'm an engineer not a bean counter and nothing comes for free.

When a "smart" company realizes market saturation and future sales will be at best incremental well for apple that's flat (or soft).  Apple sees "no  big win fall" in this market just product maintenance.

Some of the well known financial anylyzers are really showing their ignorance of business by reacting in such a way.

They should also realize market saturation and where is Apple going to make big gains/steps.  "Service", yes that's a no brainer but real big means jumping into a new industry.  They are signaling it time to move on.  I have my thoughts on what it will be and it will happen within the next year.  Perhaps a huge marriage to another innovative company?   But I'm sure the bean counters will eventually realize this.

A lot of companies stop giving guidance because they are sick of the Q to Q mentality. Recently, two financial heavy weights, Warren Buffett and Jamie Dimon, chime on the subject matter.

Ok, Apple's decision not to give iPhone unit number is not guidance but a metric. However, it can be weaponized by financial analysts just the same. For a number of years, analysts attacked Twitter on the MAU metric, until they have decided to stop recently. Sometimes you have to wonder if the stock price is driving the narrative and not the other way round.

I am at a loss to see the word 'overvalued' in Apple's valuation. Sure, it is more expensive after Apple and Warren Buffett started buying its stock but it is still cheaper than most S&P or its DJIA fellow members.

Financial engineers can cook earnings but not revenues. In fact, Apple will continue to guide those numbers.

Twenty some years ago, there was an ax analyst on Cicso - I forgot his name or his firm now - he would do channel check and all the leg works and he gave great analysis. As people know, Cicso was - still is - notoriously able to beat earning estimate by 1c. This guy was willing to go an extra mile to do the work. It appears the newly minted analysts don't want to do that. Instead, they want companies to give them numbers so they can plug them into their spreadsheets. Even you and I can do that!

* Full disclosure, I am an Apple shareholder; however, I hope at least I am not  too bias. After all, as I stated previously, you can cook bottom line but not top line. But it is the job of an analyst to "trust but verified." :)
Reply | Post Message | MESSAGES LIST | START A BOARD

It is always an issue when a Public Company changes its reporting.  This is especially true when information is being removed.  The whole point is to see the trends in the business.  If product volume is going down, that is important to know.  The real question is why this information is going away after years of it being there.  Companies report on what they report on.  They report based on the way they have run and measured their business.  It doesn't matter what competitors are doing.  Apple is measuring itself against Apple.