NEW YORK -- Cable-Next Gen Business Strategies -- Starry's fixed wireless broadband service is live in five US markets, with plans underway to roll it out to about a dozen more. But the rate of that network deployment will be determined by the startup's access to spectrum, a company exec said here Tuesday.

For Starry's initial rollout in a handful of markets -- Boston; Los Angeles; Washington, DC; New York City; and Denver -- the company has typically tapped into the 37GHz band, and is now pressing ahead with a plan to use 24GHz spectrum won in the FCC's recent auction in that band, Alex Moulle-Berteaux, Starry's chief operating officer, explained in a fireside chat with Alan Breznick, Light Reading's cable/video practice leader. 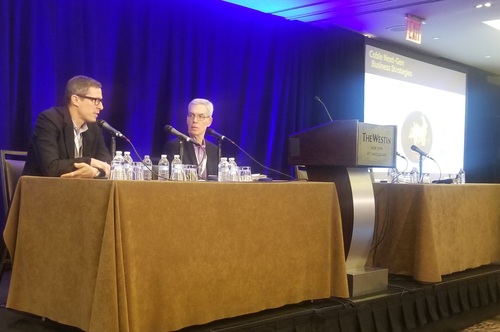 Starry's piece of the 24GHz auction spoils included 104 licenses in parts of 25 states, which puts the company in position to cover more than 40 million households, or roughly 25% of all US households. Other markets being eyed for expansion include Chicago; San Francisco; Houston; Dallas; Seattle; Detroit; Atlanta; Indianapolis; Philadelphia; Miami; Memphis; Phoenix; Minneapolis; Manchester, NH; Portland, Ore.; and Sioux Falls, SD.

Starry's still not revealing specific subscriber figures, but the company typically has been able to get penetration rates of 20% to 25% in targeted apartment buildings within six to nine months after service is launched. Starry "depends a lot on real estate partnerships," but is also pursuing opportunities involving single-family homes, Moulle-Berteaux said.

Despite being the second or third broadband provider in most of its current handful of markets, "we're able to capture quite a bit of share," the exec added.

A large majority of Starry's customers -- between 80% to 90% -- have cut the pay-TV cord. Average monthly usage per subscriber has climbed to about 350 Gigabytes, with 10% of users nearly at 1 Terabyte, and 3% to 4% consuming more than 1TB per month.

Though video streaming represents a sizable portion of traffic on Starry's network, the company currently is not interested in cobbling together formal packages with OTT-delivered pay-TV services or subscription VoD services.

"We don't see a lot of advantages in doing that," Moulle-Berteaux said, noting that Starry can't control the wholesale costs of those services, so finding an attractive margin with video bundled in would be "tough." However, Starry is considering network-optimization package options that, for example, could cater to the needs of heavy OTT video users and online gamers.

Starry is also sizing up opportunities to serve businesses in its footprint. Small businesses and retail stores are "probably the first place we'll go," Moulle-Berteaux said, noting that Starry should be able to win on price versus incumbent providers.

"It's definitely something we'll look at in 2020," Moulle-Berteaux said, noting that 65% of Starry's customers work from home 20 hours or more per week.

Moulle-Berteaux said Starry and its approach has gotten some interest internationally, including parties focused on countries such as Brazil and The Philippines. While those potential opportunities "tend to be spectrum-led... there's plenty for us to do nationally," he said, referring to the coverage gains Starry is getting from the 24GHz spectrum licenses won at auction.