Comment (2)
Samsung is supplying the gear for Verizon's fixed 5G network in Sacramento, Calif., while Ericsson's equipment will be used in Los Angeles, the only two markets announced so far.

Ericsson and Samsung are the two providers that Verizon has named for its initial 5G deployment late this year. Both are already involved with the carrier in 11 test markets for the fixed wireless service it is initially bringing to market. (See Verizon Says 'Up to 5' Fixed 5G Markets Will Go Live in 2H18.)

Samsung Corp. last week revealed in a slide (below) at the 5G North America show the eight test markets in the US it has worked on with Verizon Communications Inc. (NYSE: VZ), with Sacramento as its first commercial launch, which was also confirmed by Samsung last week. (See Samsung Supplying 5G for Verizon's First Market.) 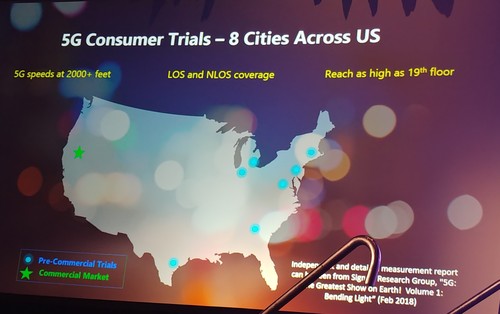 This suggests that Ericsson is in the three other test markets, and is the provider for Verizon's newly announced 5G market in Los Angeles, since Los Angeles doesn't feature in Samsung's listed test markets or its commercial sites. (See Ericsson Plots Customer Tests of Verizon's 5G.)

Ericsson AB (Nasdaq: ERIC) hasn't responded to Light Reading questions on Los Angeles yet, but the Samsung slide appears to confirm that LA will be the Swedish vendor's domain. Verizon has named only these two companies as its 5G infrastructure suppliers so far. (See Verizon CEO Says LA Is Second 5G City.)

Verizon expects to launch the fixed wireless 5G service -- using its own 5GTF (5G Technology Foundation) spec -- in three to five markets in total in the fourth quarter of 2018. It will offer gigabit download speeds at a range of up to 2,000 feet. (See Verizon Issues First 5G Radio Spec.)

DanJones 5/22/2018 | 5:07:11 PM
Re: Competition Probably will be for now though. I've been told that its a $10B to $20B opportunity for Verizon to move into move into areas against Comcast or Charter. Who will be doing their own 5G too, of course.
Reply | Post Message | MESSAGES LIST | START A BOARD

wkm001 5/22/2018 | 1:30:42 PM
Competition Comcast is the only viable provider in my area. It would be nice to have some competition. I just wish it wasn't Verizon and AT&T.
Reply | Post Message | MESSAGES LIST | START A BOARD
EDUCATIONAL RESOURCES