BARCELONA -- MWC19 -- The US campaign against Huawei is driven by fear that China's vast population and resources will make it the dominant global force in artificial intelligence (AI), and not by legitimate concerns about the security of Huawei technology, according to Kaan Terzioglu, the CEO of Turkcell.

An outspoken supporter of the Chinese kit vendor, Terzioğlu believes 5G networks will be the platform to "operationalize" AI, and that an AI lead will be the main source of competitive advantage in future.

"Who do you think will have more success in training tech intelligence? Whoever has more data. Whoever is more digitalized today and has a bigger population. China is much more digitalized than the US," he told Light Reading during a meeting at this year's Mobile World Congress in Barcelona.

The remarks came as US pressure grows on countries in Europe and Asia to sever ties with Chinese equipment vendors. Arguing that Chinese authorities could use "backdoors" in Huawei networks to spy on other countries, the US is understood to have sent officials to this year's Mobile World Congress to campaign against the company, which remains one of the tradeshow's biggest sponsors.

European operators that use Huawei's equipment in their networks have rejected the US claims and say that a ban on the company's products would drive up costs and delay the rollout of 5G services, forcing them to replace Huawei with a rival such as Sweden's Ericsson or Finland's Nokia.

Terzioğlu says he is unaware of any resistance to Chinese technology from Turkish authorities but that "some colleagues have received strong feedback from the country of origin of these claims," in a reference to US complaints about Huawei.

A risk for Huawei customers is that US authorities seek to ban the Chinese company from buying any US-made components, which are currently used in a variety of Huawei products. Last year, similar restrictions on ZTE nearly drove the smaller Chinese supplier out of business and caused major disruption for customers such as Wind Tre, an Italian mobile operator. 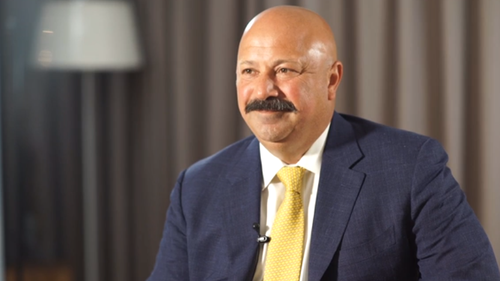 Turkcell CEO Kaan Terzioğlu: "I am not content that we as a mature industry are treated like kids who don't understand security."

The danger is real because the US is currently pursuing criminal charges against Meng Wanzhou, Huawei's chief financial officer and the daughter of company founder Ren Zhengfei, alleging she covered up details of Huawei's business deals in Iran, which is subject to US trade sanctions.

Conscious of the risks, Terzioğlu says Turkcell never relies on a single vendor and has divided its mobile network between Ericsson and Huawei.

But he is furious about the campaign against Huawei, describing it as "the player that has the impeccable track record" and pointing out that testing of network security is already rigorous in the telecom sector. "I am not content that we as a mature industry are treated like kids who don't understand security," he says.

Asked if Turkcell would back the GSM Association's recently announced plans for the post-development testing of 5G products, to address any concern about security flaws in equipment, Terzioğlu said: "I think we are always open for sharing good practices. If there is a methodology that can improve testing, then of course we will be keen to look at it. We have been looking at multiple vendors in radio and core and we are not concerned about this issue and we have the confidence to do the necessary tests and processes."

Terzioğlu says he can understand why the US may be worried about falling behind China in a tech arms race but that "attacking Huawei" is not the right response.

Future 5G networks could be critical to the rollout of AI-based applications because of the improvements in performance they bring. New "edge" 5G infrastructure, which moves computing power in networks much closer to end users, could potentially spur development by helping to reduce the "latency," a signaling delay on data networks that can rule out advanced applications like robotics on today's 4G systems.

Terzioğlu's remarks come as Huawei tones down references to AI in its network products. Like Ericsson, it is developing systems that will allow mobile networks to manage and operate themselves.

Regarding Internet security, web giants such as Facebook should represent a much bigger worry than equipment vendors, says the Turkcell boss. "I am surprised that security issues are focused on the software and applications layer given the source of the scandals last year," he said, referring to the Cambridge Analytica data breach that grabbed so many headlines.