It sounds like a description of scarier-than-usual ghosts, and there is something quite otherworldly and mysterious about "spectral efficiency." Operators and equipment vendors are bandying it around as a justification for spending on next-generation 5G networks. That some arcane terminology has assumed this importance could point to the lack of a compelling 5G sales opportunity right now. But should investors feel any kind of thrill?

Yes and no. The basic premise is that sending one "bit" of data costs less on a 5G network than it does on older 4G infrastructure. If future mobile applications demand much faster "gigabit-speed" connections, these cost-per-bit expenses could spiral out of control without a more spectrally efficient technology. But that does not mean shareholders should expect juicier profits with the rollout of 5G networks.

When network planning gives you the heebie-jeebies.

To understand why, it is useful to do some digging. (And you can also read this special report about the 5G situation in Europe.)

The cost-per-bit improvement stems partly from new technology and partly from the spectrum used to support 5G services. On the tech side, the air interface is clearly designed to pump a lot more data between basestations and customer devices than 4G could ever manage. Then there is massive MIMO, another weirdly named 5G technology that essentially introduces dozens more performance-boosting antennas into the network. When it comes to spectrum, the frequency bands associated with 5G are typically "fatter" than the ranges used for 3G and 4G. That also adds up to more capacity and higher-speed connections.

In other words, operators get more bandwidth bang for their buck. "The biggest advantage with 5G is that operators will be able to offer significantly higher data speeds and significantly more capacity, so they can increase the data bucket for customers without increasing the cost structure of the business," says Bengt Nordström, the CEO of consulting firm Northstream and a former C-level telco executive.

The trick is keeping that cost structure the same. Building lots of extra mobile sites would drive up operating expenses and could result in a smaller improvement. For this reason, Nordström is not in favor of 5G "densification" to support mobile broadband services. "You deploy 5G on your existing grid and then you don't get the dependency of building new sites, which is costly," he says.

Because there are so many different parameters besides densification, putting a hard figure on the 5G cost-per-bit improvement is tricky. According to Northstream's technical analysis, the switch from 4G to a 5G air interface should reduce cost per bit by 15-30%. Introduce massive MIMO and factor in new spectrum, and much sharper reductions are feasible. Scott Petty, Vodafone UK's chief technology officer (CTO), is eyeing a four- to five-fold efficiency gain. But Johan Wibergh, the CTO of Vodafone Group, has previously indicated 5G could be ten times as cost-efficient as 4G.

"Spectral efficiency is very sensitive to all kinds of assumptions you make on the scenario, and there are many factors that could affect it," says Lei Shi, a senior manager and the head of technology at Northstream. Even if operators resist densification, overall operating costs are likely to rise. On the energy side alone, for instance, massive MIMO will drive up charges, according to one operator. New antenna components are more power-efficient, according to Northstream, but their numbers will multiply.

Spectral efficiency might translate into healthier profits if the explosion in data traffic were accompanied by an increase in sales. Unfortunately, however, revenue per bit is falling even more dramatically than cost per bit. In the UK market, the average monthly price of a basket of mobile services fell from £20.76 in ($26.02) 2013 to £18.36 ($23.01) in 2017, says telecom regulator Ofcom, while the average mobile data allocation rose from 300 megabytes to 1.9 gigabytes over that period. If one treats voice and text -- undemanding services from a network perspective -- as "free," this means the price per megabyte fell from 6.92 pence sterling in 2013 to less than a penny sterling just four years later.

It is not just a UK phenomenon, either, but one that can be observed in most developed markets. "The unit price of a gigabyte has deflated massively and that needs to be taken into account," says Gabriel Solomon, the head of European government affairs for Sweden's Ericsson. He thinks regulatory authorities have overlooked this important metric when making decisions about appropriate levels of national competition (read our special report for more from Solomon). 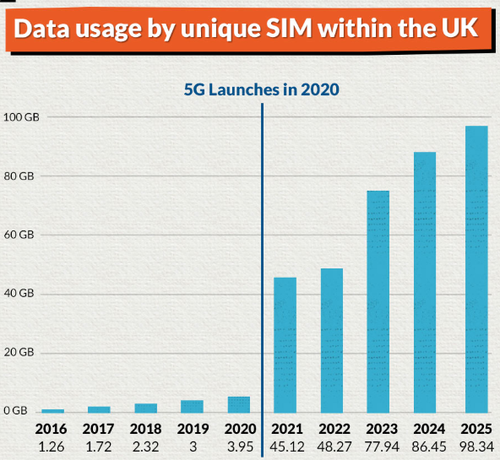 This all means an operator's only way to seriously boost margins is through "digital transformation," says Nordström. Shutting down old IT systems, moving resources into the cloud, closing retail outlets and investing in artificially intelligent "chatbots" to replace customer service assistants are all options for cost reduction. It is no coincidence that as Vodafone scraps data allowances, and introduces "unlimited" deals, it is taking many of those steps. Staff numbers at its UK business have fallen 13% in the last two years, to 11,525 in the last fiscal year.

A data tsunami is now coming. Giffgaff, a UK service provider owned by Telefónica's O2 business, expects monthly data usage per UK mobile SIM to rise from 3 gigabytes this year to 45 gigabytes by 2021 and a monstrous 98 gigabytes by 2025. If this is right, then a typical customer in 2021 on Vodafone's top-end, SIM-only 5G tariff, which costs £30 ($37.60) a month, would pay just one 15th of a penny sterling for every megabyte used. For anyone looking into spectral efficiency, that's a scary thought.

The modelled downlink increase is nice but not exactly game changing. The only way to increase spectral efficiency further is through network densification. Yes, this costs money but there is no such thing as a free lunch.

According to V Chandrasekhar et al, wireless capacity has increased a million-fold since the 1957. They broke this down into:

- a 5-fold improvement from dividing spectrum into thinner slices,