It's become as intrinsic a feature of the telecom landscape as the US clash with Huawei or the incessant squawking about 5G: T-Mobile has once again notched up more than 1 million customers in a single quarter.

Nearly 2 million this time around, in fact, with the US operator registering 1.9 million net additions, including 1 million postpaid phone customers, for its just-finished fourth quarter: That means the self-styled "Un-carrier" gained 7 million subscribers last year, including 4.5 million postpaid (including phone and other device users).

It also means T-Mobile now has about 86 million customers in total -- impressive considering the company had only 63 million as recently as January 2016. Just where have all those new device addicts come from?

Well, there has clearly been lots of room for growth in the vast US market, but T-Mobile has also benefited from having three misfiring national rivals. Fourth-placed Sprint, with which T-Mobile is struggling to engineer a merger, registered a net decrease of 4 million customers in the four years to September 2019, leaving it with fewer than 54 million.

As for AT&T and Verizon, neither has found an answer to the Un-carrier threat. AT&T presents a bewildering array of statistics that includes tablets and other "connected devices," but it finished last September with about 75 million postpaid customers and fewer than 18 million prepaid ones: It lost more than 1 million postpaid users in the preceding year.

Verizon, meanwhile, recorded about 94 million total wireless retail connections in September, down from 94.5 million at the end of 2018. T-Mobile's soon-to-be un-CEO John Legere, who is set to leave the company at the end of April, is highly regarded for his marketing prowess, but the lackluster performance of AT&T and Verizon has undoubtedly made his job a lot easier.

One of the big telecom questions at the start of 2020 is whether T-Mobile can maintain its leadership on customer growth under new management and as the battlefield shifts from 4G to 5G technology. Mike Sievert, T-Mobile's president and chief operating officer, is set to replace Legere as CEO in May, and his image alone is markedly different. With his wild eyes, long hair and leather jacket, Legere looks like a slightly deranged rock star, and sometimes behaves like one. The more conventional Sievert would not appear out of place at AT&T or Verizon. 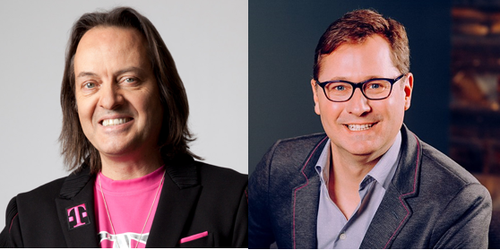 In the nascent 5G market, T-Mobile is going for coverage as opposed to capacity, with plans to build a "nationwide" network based on its 600MHz spectrum holdings. The lack of spectrum in this frequency range means it will struggle to provide superfast services to customers in 600MHz-only areas, however. The approach is in sharp contrast to that of Verizon, which is focused on much higher frequency bands that promise lightning-quick connections but come with poor coverage. T-Mobile has repeatedly criticized the spottiness of Verizon's offer.

Consumers would have to be telecom nerds to pay much attention. In the pre-holographic calling era, nobody seriously needs a high-speed 5G connection, and 5G on 600MHz will offer nothing 4G cannot other than a poorer selection of handsets. At least Legere's rants about Dumb and Dumber, as he calls AT&T and Verizon, have been a reliably entertaining spectacle. If he leaves telecom entirely, the industry will miss him and his maverick ways.