Mention the likes of Iliad and Reliance Jio in the company of traditional telcos and you might just kill the conversation. Both operators have stormed into their respective markets with a different way of thinking about commercial offerings and technology, unencumbered by legacy baggage. The impact on the old school has been devastating.

Now you can add a new name to the list of disruptors: Rakuten. The Japanese ecommerce player, with about 100 million customers, last year announced bold plans to build a greenfield fourth mobile network in one of the world's most developed telecom markets. Last week, it published details of its network plans and the partners it would use.

For rival operators NTT DoCoMo, KDDI and SoftBank, the blueprints are troubling, as Rakuten aims for an October launch of its services.

One of the most sit-up-and-take-notice things about Rakuten is the identify of its chief technology officer. Tareq Amin was previously a senior vice president at RJio and already has a track record of successful disruption. "He has taken across the same principles and many of the same vendor relationships," says Gabriel Brown, a principal analyst with the Heavy Reading market research business. "From the technology perspective the pitch is that they can be ultra-modern."

Can He Do It Twice? 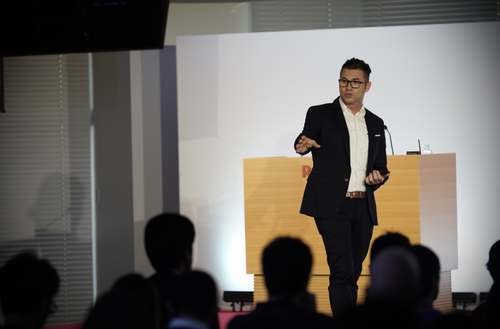 Indeed, just like RJio in India, Rakuten is starting from scratch. That means it does not have to worry about maintaining old "brownfield" equipment and IT gear and can take full advantage of the latest wizardry the telecom industry has to offer. The new network, says Rakuten in its statement, will adopt 5G systems architecture from launch. It will also, claims the operator, be the world's first "cloud-native" network, fully virtualized and highly automated from the radio access network (RAN) to the core (see diagram below). If it works out as intended, it could change the way networks are built globally. (See How RJio Built India's Most Automated Network and Is vRAN Still Too Hot to Handle?) 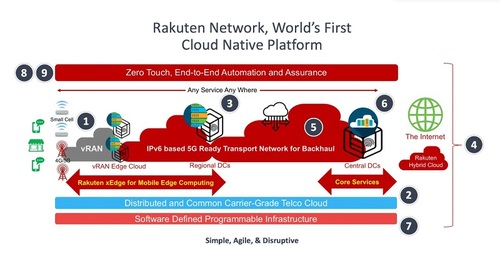 The list of network vendors is a handy guide to what Rakuten has planned. First off, there is the use of Altiostar, a US start-up that specializes in RAN virtualization. As revealed by The Mobile Network, which spoke at length with Altiostar about Rakuten's plans, the Japanese new entrant will construct 4,000 virtual distributed units as well as two central data centers as part of its virtual RAN. Responsible for signal processing, this infrastructure would connect to the remote radio heads that Rakuten is building.

Altiostar is interesting for several reasons. The first is that Rakuten has made a "strategic investment" in the company, the size of which it has not disclosed. Brown notes that Altiostar was the company that pioneered the higher-layer "functional split" -- determining which network functions are done at the radio site and which at the baseband unit -- that has been standardized for 5G. (This "Option 2" split is an alternative to the lower layer "Option 7" split that has been a focus for the O-RAN Alliance, an operator-led group trying to bring open technologies and approaches into the RAN -- see Open Conflict Over Open RAN and Why Resistance to the Open RAN May Crumble.)

What also marks out Altiostar is the fact it already counts India's Tech Mahindra as an investor. The Indian IT giant has clearly been angling for a bigger role in the network equipment industry. Rakuten's selection of Altiostar as a RAN vendor made Tech Mahindra the natural choice for systems integration expertise, and its name features in a long list of suppliers that turns up in Rakuten's press release. (See Virtual RAN Startup Altiostar Raises $30M.)

As interesting as the details of network partners are the names missing from that list. China's Huawei Technologies is not in the picture -- ongoing security concerns look to be the cause -- while Sweden's Ericsson is also nowhere to be seen. Nor is South Korea's Samsung, even though it has figured prominently in RJio's deployment of a 4G network in India. (See Japan Next in Line to Block Huawei, ZTE.)

Several of the approved suppliers have been quick to indicate exactly how they will figure in Rakuten's plans. Nokia, for instance, will supply remote radio heads (its AirScale range) and various elements of core network software (under the AirGile brand). Among other things, it says it is working with Rakuten on several core functions that would take advantage of automation, artificial intelligence and machine learning to reduce network operating costs.

Semiconductor giant Intel, meanwhile, has revealed it will contribute Xeon processors and FGPA-based accelerators to the Rakuten project. From Intel's update, observers can also glean that servers will come from Quanta and other core network software from Cisco. Rakuten appears to be working with Qualcomm, meanwhile, in the small cells area, where it would make use of the hardware company's chipsets.

What's evident from Rakuten's very detailed statement is that it plans to use several technologies and architectural concepts that are still only discussion points for some other telcos. Besides the virtual RAN, those include edge computing, network slicing, extreme automation, an IPv6-based transport network, a single OSS (operational support systems) layer and a packet core that fully separates the control and user planes. The reduction in the signaling delay that comes with this network could lead to all sorts of 5G opportunities for Rakuten that its rivals cannot easily exploit.

So what's next? Rakuten says it carried out tests of the new virtualized network in early January in suburban Tokyo, just outside its headquarters, with several executives making voice and video calls on the Viber platform. Trials will now be extended across western Japan, featuring as many as 10,000 users from Rakuten and its partners. "With automation and virtualization, Rakuten is redefining how mobile networks are designed and how services can be consumed," said Mickey Mikitani, Rakuten's CEO, in the statement on launch plans.

Get ready for RJio-sized disruption.