Nokia has reacted to criticism about the commercial readiness of its 5G systems by claiming that five operators are now providing 5G services over its networks.

The companies include all three of South Korea's mobile operators -- KT, SK Telecom and LGU+ -- as well as Vodafone Italy and du in the United Arab Emirates.

The details were shared with Light Reading after Nokia blamed software issues and interoperability problems for a 200 million ($226 million) revenue shortfall in the first quarter. "Our revenue recognition policies and contractual terms require reasonable commercial availability and customer acceptance of our own system software before we can recognize revenue related to a new generation of mobile technology," said Rajeev Suri, Nokia's CEO, during an earnings call in April, according to a Seeking Alpha transcript. "Neither of this was fully in place by the end of Q1, but that situation is changing fast."

Nokia has previously maintained that interoperability and standardization remain challenges for the entire industry and that it is not the only company affected.

Asked if the 5G launches by service providers meant software problems were largely resolved, a Nokia spokesperson said: "We are at the very beginning of the 5G investment cycle and everyone is going to be experiencing delays of some sort as the technology is fine-tuned for network launches. A few weeks' delay is immaterial in the context of the 15-20 year cycle."

The company also said that "near-term launches" are planned in Japan, where it claims 5G deals with NTT DoCoMo and SoftBank, and the UK, where Three UK is identified as a customer.

Its update on live networks follows recent criticism of Nokia by a senior executive at Ericsson. Arun Bansal, the head of the Swedish vendor's Europe and Latin America business, said Ericsson had been winning market share against Nokia because service providers did not want to be "late" to 5G. "One of our nearest [competitors] has not managed to launch a single 5G network yet in Europe or America," he told Light Reading earlier this month in a clear reference to Nokia.

During this week's Connected Britain event in London, Bansal said nine customers had launched 5G services on Ericsson's equipment, those being AT&T (US), Etisalat (UAE), KT (South Korea), SK Telecom (South Korea), Sprint (US), Swisscom (Switzerland), Telstra (Australia), Verizon (US) and Vodafone Spain. It has announced details of commercial 5G deals with another 13 operators that have yet to launch services (see graphic below). 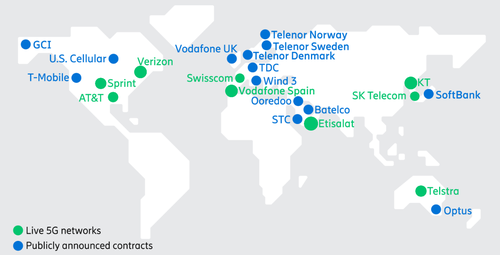 Suri has denied that Ericsson is winning 5G market share at Nokia's expense. "With our Nordic rival, when there are swaps we win two-thirds of the time," he said during a recent interview. "We have a good track record against them."

While Nokia may have fewer live networks than Ericsson, it boasts 43 commercial 5G agreements in total and has now disclosed details of 23 customers. The 18 that have yet to launch services on Nokia's equipment include A1 (Austria), Antel (Uruguay), AT&T (US), NTT DoCoMo (Japan), Elisa (Finland), Ooredoo (Qatar), Optus (Australia), Rain (South Africa), Salt (Switzerland), SoftBank (Japan), Sprint (US), STC (Saudi Arabia), Telenor Group, Telia Company, Three (UK), TIM (San Marino), T-Mobile (US) and US Cellular (US).

China's Huawei, the world's biggest supplier of network equipment to operators, has not been disclosing all details of customer contracts but is known to have 5G deals in place with some of Europe's biggest operators, including the UK's Vodafone and Germany's Deutsche Telekom.

A spokesperson for the company says it has now signed 46 commercial 5G contracts and shipped as many as 120,000 5G basestations, up from 40,000 in February, despite a campaign against it by US authorities, which say its links to the Chinese government make it a threat to security.

To put that 120,000 in context, Vodafone currently has about 18,000 mobile sites providing near-nationwide coverage of the UK. Speaking at Connected Britain this week, Victor Zhang, Huawei's president of global affairs, said Huawei expects there to be 6.5 million 5G basestations worldwide by 2025, covering 58% of the world's population.

Ericsson and Nokia do not disclose details of basestation shipments.

For an interview with Rajeev Suri about Nokia's strategy, click here.

Gabriel Brown 6/20/2019 | 11:08:16 AM
Public 5G references There are *lots* of claims and counter-claims about 5G contract wins amoung the vendor "community" (really, competitors).

My analyst perspective is that

a) It is some kind of leading indicator, but I'm not sure how conclusive it is at this early stage

b) It is good to see public references - - i.e. named operators -- and to get some indication of the scope of the contract

Just saying you have x number of contracts is less helpful, for obvious reasons.

I talk frequently with all the vendors in this market