German customers of Deutsche Telekom will be able to use 5G smartphone services in a few urban hotspots after the partly government-owned telco launched the next-generation technology in Berlin and Bonn and promised to have 300 5G antennas in operation by the end of the year.

The launch this week gives Deutsche Telekom a headstart over rival operators Vodafone, Telefónica and new entrant 1&1 Drillisch, all of which secured spectrum in a recent auction that raised about 6.5 billion ($7.3 billion) and triggered complaints that exorbitant licensing costs would slow down 5G network rollout.

The first-mover advantage may be short lived, though: Vodafone UK this week said it would operate a 5G roaming service across Germany, Italy and Spain by the end of the year, implying its German subsidiary will soon launch its own 5G service.

Deutsche Telekom says it is preparing to add the cities of Darmstadt, Hamburg, Leipzig and Munich to the 5G footprint and that it will bring services to Germany's 20 largest cities in the next 18 months.

But availability looks set to remain extremely limited this year. The 300 antennas would account for just 1% of Deutsche Telekom's 28,000 mobile sites in Germany. By contrast, the UK's BT aims to have 5G up and running at 1,500 of its 19,000 sites by the same date.

Unlike the UK's mobile operators, however, Deutsche Telekom has announced plans for the "densification" of its network to support faster mobile services in areas with poor coverage. While its initial focus is on filling gaps in the 4G footprint, the move could eventually aid the rollout of 5G services in higher frequency ranges, where coverage can be a constraint. Having used spectrum below 2.6GHz to carry its 3G and 4G services, it will make use of the 3.6GHz band to handle 5G.

The operator is to add another 2,000 basestations this year alone, and it expects to have 36,000 mobile sites in operation by 2021.

Having already grumbled about 5G auction costs, managers appeared to hold German authorities largely responsible for the deployment challenges. "We need a clear regulatory framework and pragmatism from the authorities -- particularly when it comes to questions regarding regional spectrum, local roaming, allocation of auction proceeds and the approval procedures, which take far too long in Germany," said Dirk Wössner, the managing director of the operator's German business. 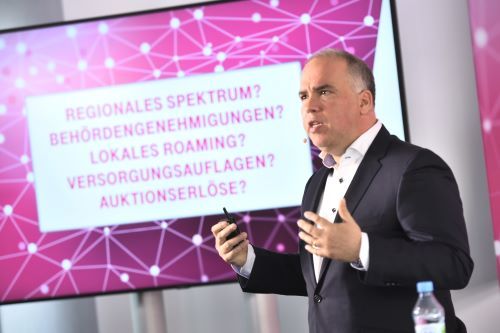 Regulators have attached stringent coverage obligations to the 5G spectrum they recently sold, requiring any license winner to hit a 98% coverage target by 2022 under existing rules. In March, the Cologne Administrative Court rejected a legal challenge to those rules by operators.

Before the auction took place, Deutsche Telekom had unveiled plans to cover 99% of the German population with 5G services by the end of 2025, promising to make an annual investment of 5.5 billion ($6.2 billion) in German capital expenditure.

Despite the hurdles it is facing, the company now claims to have connected about three quarters of its antenna locations with fiber. It has continued to use 5G antenna equipment from China's Huawei after German authorities resisted US pressure to ban the Chinese company on the grounds of national security. While Ericsson replaced Nokia as a second radio access network supplier at the end of 2017, the Swedish company does not yet appear to be supporting any of Telekom's 5G services.

A taste of the 5G experience will not come cheaply for Deutsche Telekom's smartphone customers. In contrast to the UK's Vodafone, which ditched price premiums when it launched 5G services in London this week, Deutsche Telekom is charging 84.95 ($95.85) per month for unlimited service on the Samsung Galaxy S10 5G. The device is priced at 899.95 ($1,015.50), although customers can receive a discount if they trade in old handsets.

Anyone who is not a Samsung fan will have to wait for other phones to become available, although Deutsche Telekom is also offering an HTC 5G Hub that can support residential broadband services for 74.95 ($84.60) a month. The hub, which connects as many as 20 devices, costs 555.55 ($626.90).

As with Vodafone's glitzy 5G launch in London, there is a disconnect between the ultimate promise of 5G and the 5G services -- essentially a turbocharged version of 4G -- that operators are now introducing. While Vodafone has talked up "haptic" suits and holographic calls, Deutsche Telekom has drawn attention to the campus and industrial networks it is building with companies like Osram, a lighting manufacturer, and ZF, an automotive supplier.

Any commercial plans have yet to crystallize, however, and there is the usual concern that operators may lose out to web services companies in this area. Germany's plans to reserve spectrum for industrial use, which were criticized for inflating costs during the 5G auction, could also limit the size of the addressable market.

Nevertheless, Deutsche Telekom is working alongside 18 startups at its tech incubator in Berlin on applications including real-time sports information, training with data glasses and data gloves and autonomous robots in factories.

Services would rely on new edge-computing infrastructure, which hosts IT and network resources in facilities that are much closer than traditional data centers to end-user devices. The purpose of the move is to cut the signaling delay, which is currently too long for applications like virtual reality gaming and robotics, according to some experts.

"We intentionally opened up our 5G and edge infrastructure for startups and their ideas at a very early stage," said Claudia Nemat, Deutsche Telekom's head of technology. "The feedback from the pioneers showed us how future applications can benefit from the combination of 5G and edge computing."

Deutsche Telekom has had edge computing at the heart of its 5G strategy for some time: It spawned edge computing software specialist MobiledgeX early last year and has already deployed the startup's software in some live network nodes in Germany.

Deutsche Telekom said its focus would now shift to "commercializing" some of these new 5G concepts.