BARCELONA -- MWC19 -- The accompanying music was typically dramatic; it was just a shame about the spectacle. As technology demonstrations go, watching a box-shaped robot drift across a factory floor, like a supermarket trolley given a decent shove, was not up there with remote-control surgery. But it could turn out to be far more important for Germany and Europe, as the region struggles to address criticism it has fallen behind Asia and the US in the hi-tech stakes.

The demo, screened at Deutsche Telekom's stand during this year's Mobile World Congress, took advantage of what Europe's biggest telco is claiming as Europe's first 5G campus network. That allowed Osram, a German manufacturer of lighting technologies, to use an autonomous robot for moving equipment across the factory floor at its facility in Schwabmünchen. Without network slicing, a 5G technique that securely reserves part of the network for a specific service, it could not have happened, according to an Osram spokesperson. 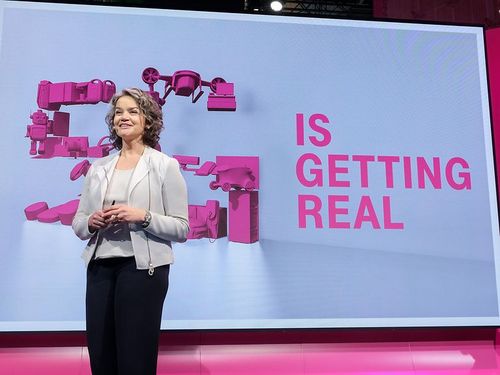 Claudia Nemat, Deutsche Telekom's board member for technology, is a true 5G believer.

Its high profile at this year's Mobile World Congress could make Osram a poster child for Industrie 4.0, Germany's initiative for introducing more advanced, digital technologies into the manufacturing sector. With little sign that most consumers will pay more for higher-speed smartphone services than they do for today's 4G connections, Deutsche Telekom's best chance of 5G sales growth will come from entirely new business in these industrial markets. And there is mutual advantage: Germany industry risks losing out to other regions if it cannot make use of new technologies. "Productivity gains are decreasing, and the next step is digitalization," says Osram's spokesperson.

Amid the criticism about Europe's lag, Deutsche Telekom is desperate to show the world it is 5G-ready. "I believe there is no way for Europe to fall behind in 5G and that is what we are striving for," said Claudia Nemat, Deutsche Telekom's board member for technology, during today's press event. "We are investing heavily in the network. We need to have 5G in Europe."

In 2012, under previous management, Deutsche Telekom spent about 5.9 billion ($6.7 billion) in capital expenditure across Germany and Europe. This year it expects to invest around 7.9 billion ($9 billion).

With an overarching goal of covering 99% of Germany's population with 5G technology by 2025, Deutsche Telekom is busy putting up the necessary equipment. Some 150 "live" 5G antennas are now operating in Austria, Germany, the Netherlands and Poland, it revealed today. The first commercial offers are promised in Germany later this year.

That will come after a long-awaited spectrum auction gives Deutsche Telekom the frequencies it needs to support new 5G services. But it may be some time before the automation demonstrated at OSRAM's factory becomes mainstream. Although a more advanced 5G standard is still in development and might not take shape commercially for a couple of years, the bigger issue is around the business case and the investments needed to support industry-based 5G offers.

Nemat appears confident these will eventually pay off. "Many innovations you see here and especially the industrial ones are not primarily around selling traditional connectivity but about finding solutions to meet industry requirements," she told analysts and reporters at Deutsche Telekom's stand this afternoon. "That will create new opportunities for you and a business model for us from selling latency and security."

5G gets edgy
One possible 5G "killer app" addressing consumer demand could be gaming, Nemat thinks. "What is missing is a true multi-gamer experience where you can see fellow players on the screen and the virtual reality fits together," she says. In the mobile world, this has not worked so far because of high "latency," a signaling delay that occurs on data networks. But with 5G, and a rearchitecting of the network, it might become feasible.

A challenge is reducing the distance between the data centers where the processing happens and the end-user devices. Deutsche Telekom has already started investing in new "edge" facilities much closer to the end customer. Four have so far been developed in the cities of Berlin, Frankfurt, Hamburg and Munich. Integral to the German operator's edge plans is a California-based software startup called MobiledgeX, whose software is being used in gaming trials that also involve Niantic, a games developer, and smartphone maker Samsung. "The MobiledgeX piece means in principle you can play with hundreds of players," says Nemat.

Whether such a small number of edge facilities is enough to support a long-term, mass-market service is questionable. UK telco incumbent BT recently told Light Reading that 1,000 edge facilities would be needed to cover the entire UK market (although without specifically referencing mobile gaming as an application). Somewhat coy about its edge vision, Deutsche Telekom has not said how many edge facilities it plans to build in total, or even if it yet has a firm idea. But those facilities may be needed to support 5G industrial offerings, and not just a new gaming service. Low latency could be a critical requirement for almost anything that uses robotics.

Nemat is at pains to emphasize that "it is not necessary to have every capability of 5G at every place." With multi-gaming, she points out, most interest is likely to be found in city centers "and not in the middle of a forest." The network that Germany eventually gets in 2025 is likely to be a far more diverse creation than today's 4G infrastructure. And Deutsche Telekom will be relying heavily on that 4G network in the meantime.

The skeptics will take some convincing. Even if multi-gaming turns out to be the consumer addiction of the 2020s, will the additional revenues for Deutsche Telekom justify the 5G rollout costs? Such questions may be hard for Deutsche Telekom to avoid if its 5G network proves to be a non-uniform thing. But with so many of 5G's "pioneers" focused on such humdrum benefits as a capacity boost for smartphones, it is refreshing to hear an operator in the supposedly 5G-unready European region talking about a real mobile revolution.