Two of the world's biggest Internet companies have been working for years on new and unique wireless networking technologies, and today the companies' efforts are being used to cover Peru with 4G LTE.

The news helps to highlight the desire of Internet companies such as Google and Facebook to extend the reach of the Internet -- and their online services -- to more potential customers. And it also underscores the fact that some of the world's biggest suppliers of 4G LTE equipment -- Ericsson, Nokia and Huawei -- are increasingly facing competition from alternative sources with big names, and big wallets, supporting them.

However, it's unclear whether the network that Google and Facebook are backing in Peru will ultimately have an effect on the wider, global wireless industry as it races to 5G.

Internet para Todos (IpT) now operates around 650 mobile sites covering about 800,000 people. Around half of those sites were built by a traditional vendor, understood to be Huawei, while the remainder come from open RAN vendor Parallel Wireless.

And, in a bid to expand its coverage area in Peru, IpT has struck an agreement to use Loon's high-altitude balloons to expand mobile Internet coverage for Telefónica customers starting next year. Loon will be used to provide wireless Internet coverage in parts of the Loreto Region (Peruvian Amazonia), one of the largest and most remote regions in the country.

Loon is a graduate of Google's X moonshot division, and has been working this year to create an actual business around the Internet-from-balloons idea long nurtured by Google. IpT is Loon's second balloon customer; Loon said it is waiting for final regulatory approval to begin "flying and conducting the final stages of network integration" with Telkom Kenya in that African country. 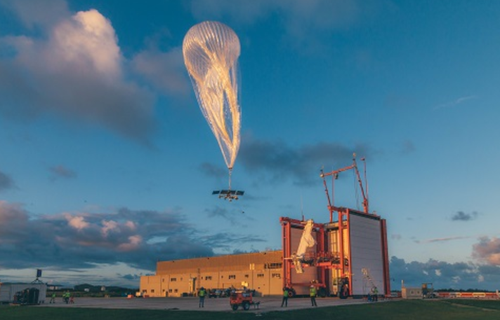 Loon will provide coverage in one of the most remote areas of Peru.

Why this matters
Google and Facebook aren't the only ones looking at innovative ways to bring Internet services to rural areas. Elefante Group, Altaeros, SpaceX, SoftBank and others are looking at everything from low-orbit satellites to drones to blimps that could beam Internet connections to the underserved or unconnected. And while such efforts are certainly laudable, it's also important to note that Facebook and Google both operate massive online advertising businesses that would likely benefit from the addition of more eyeballs on the Internet.

But for the wider wireless industry, the meeting between Facebook and Google in Peru does represent a new dynamic -- both in terms of technologies and business models -- in the market.

First, in terms of business models, IpT was founded as a "neutral host" infrastructure provider that could be used by Telefónica and other providers: IpT is intended to act as a wholesale provider to other network operators, a "carrier for carriers."

The notion of a wholesale wireless network provider continues to gain traction, whether it's Verizon's agreement to supply the wireless network for Comcast and Charter's mobile offerings, or Dish Network's intention to make wholesale a core part of its 5G strategy.

And in terms of technologies, IpT is one of the world's first commercial deployments of OpenRAN technology -- a brainchild of the Facebook-inspired TIP. OpenRAN promises to allow operators to build more "open," disaggregated networks that cut the ties between hardware and software and enable greater technology options beyond the traditional, dominant vendors.

That trend could have major implications for the likes of Huawei and Ericsson, because it could foster new suppliers in the industry. Just a few weeks ago Vodafone issued a tender for the whole of its European radio access network (RAN), comprising around 150,000 mobile sites, partly with the goal of encouraging the development of OpenRAN products from new (or even existing) suppliers. "We are looking for more modern, up-to-date, future-proof and lower-cost kit. It is a great opportunity for OpenRAN," explained Yago Tenorio, Vodafone's head of network strategy.