Can the new 'telecom cowboys' force themselves onto a MWC keynote stage?

It was pretty much the same-old-same-old on this year's MWC Vegas keynote stage. Mostly men. Mostly with white or graying hair. Most in suits.

And pretty much all of them were onstage last week to represent big, established telecom companies. Think AT&T. Ericsson. T-Mobile.

But if you searched through this year's 8,200 MWC Vegas attendees, there were a handful that brought some new blood to the show. They were mostly in their 20s and 30s. Many sported shorts and baseball hats. A few acknowledged that this was their first time at MWC.

One longtime telecom veteran  an executive who has been working with some of these upstarts  described them to me as the "new telecom cowboys."

They're from the obscure but growing "decentralized wireless" sector of the telecom industry  DeWi for those in the know  and they don't really care about the old way of doing things. They talk about "crypto natives" and "tokens" and "mining." And they're pretty sure that they're onto something here.

"I quit my job to do this," Andrew Fisher, CEO of Noble Networks, told me. In support of DeWi players like Helium Mobile and Pollen Mobile, Noble Networks is working to build 4G transmission sites in 3.5GHz CBRS spectrum atop rooftops and other locations all over the country (though with a focus on the Jersey Shore).

"I've banked pretty much everything into it," Fisher said.

Basically, Fisher and those like him believe that big companies like Ericsson, Verizon and Crown Castle are moving too slowly. What they should do, according to the DeWi argument, is open up their systems to do-it-yourselfers like Noble Networks. That way, cellular dead zones can be quickly patched by anyone willing to invest $10,000-$20,000 into buying and installing a small-scale cell site. And those willing to operate such sites should be rewarded  first by cryptocurrency, but ultimately by the revenues from commercial traffic over their cell sites. 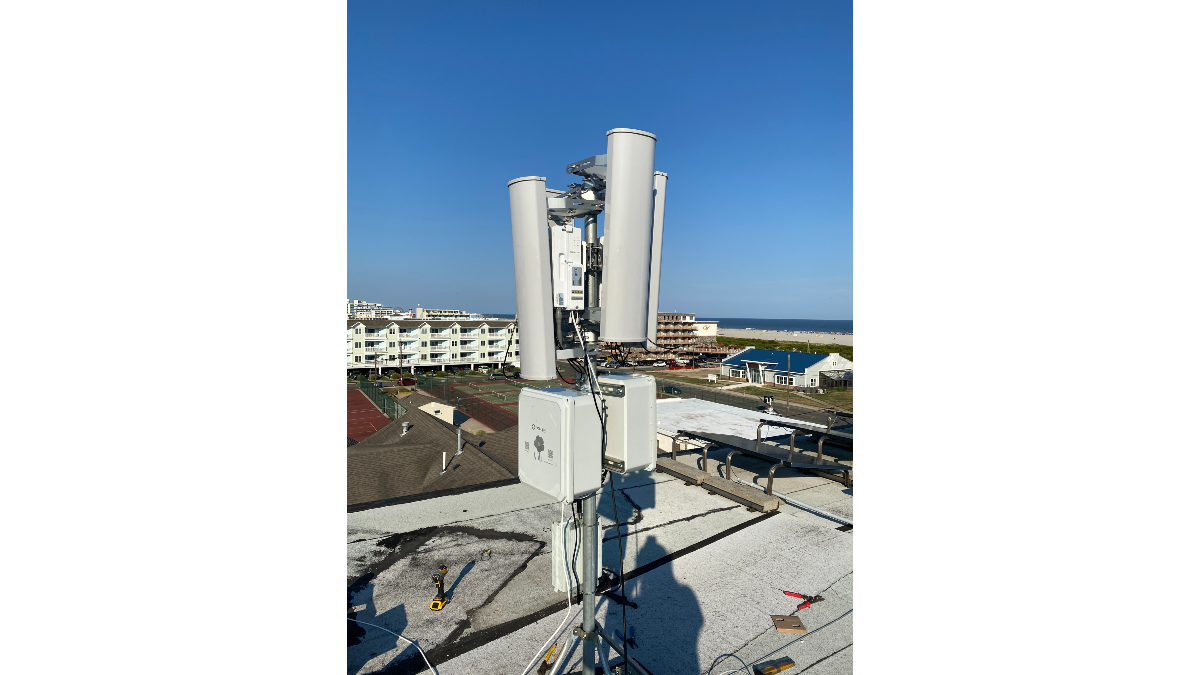 A force to be reckoned with

Helium Mobile, from Nova Labs, remains the market leader in DeWi. It kickstarted the space by essentially pulling off a miracle: It built an IoT LoRa network that today covers 10% of the world's population, all without spending any money. Instead, it rewarded everyday users with Helium cryptocurrency for buying and operating their own LoRa transmitters.

Now, Helium is working to expand that model into other networks, including 5G. Along those lines, it recently announced plans to launch commercial smartphone services sometime next year via an MVNO agreement with T-Mobile.

Helium's incredible progress has spawned copycats. Pollen Mobile is pursuing what appears to be a similar model. Although the company isn't releasing details just yet, it did set a goal of transmitting paid data over its network by the end of 2022.

The newest entrant into the space is Xnet. "Xnet's fast, reliable and secure cellular service will be deployed by a dedicated community of node operators," the company wrote on its website, where it offers a detailed white paper outlining its plans to build out a network across North America starting this year and then expand internationally starting late next year. "Node operators will receive crypto mining rewards and free mobile service in exchance [sic] for filling in coverage gaps and expanding existing network capacity."

According to one of its latest tweets, Xnet executives also attended MWC alongside those from Pollen, Noble and other DeWi players.

According to one telecom veteran in the CBRS industry who spoke to me on the condition of anonymity, these DeWi operations are nothing to sniff at. In terms of the total number of registered CBRS transmission sites, collectively Helium, Pollen and other DeWi players now rank among the top five CBRS network operators in the US. That puts them alongside Verizon, Comcast, AT&T and others that are also deploying widespread CBRS networks.

It's relatively easy to point out the many, glaring holes in the DeWi push.

"At best, I think these are delusional wishful thinking. At worst, I think several are outright scams," Disruptive Wireless analyst Dean Bubley wrote in a brief LinkedIn post on the topic recently.

Indeed, the latest figures from Fortune show that the original DeWi network that started it all  Helium's LoRa network  only generated around $1,000 in revenues during the past month. And that's actually down from what may have been a high point of around $6,000 per month earlier this year. Meaning, absolutely no one is paying to actually use the IoT network that Helium built.

Of course, that may not come as a surprise to anyone with a history in the IoT space. From Ingenu to Sigfox to NB-IoT, the IoT industry is littered with companies that have struggled to find demand. And that's partly because the IoT networking industry really only works financially if the connections for individual IoT devices are as close to free as possible.

Will DeWi in the 4G CBRS space be any different? Perhaps. After all, most smartphone plans start at $30 per month.

But one truly glaring problem I see is an assumption that big carriers like T-Mobile and Verizon will eventually come to embrace DeWi networks through a neutral host model.

"Xnet will be a 'neutral host' mobile network built to seamlessly interconnect with other large and small mobile network operators, private LTE networks and roaming hubs," the company wrote in its white paper. "Given its focus on providing a full suite of mobile network services in areas where current operator coverage is insufficient or lacking completely, Xnet's value proposition is superior to any randomly deployed 'data only' network."

Fisher, of Noble Networks, offered a similar outlook. He said that DeWi networks can potentially support a variety of different business models, from private wireless networks for enterprises to coverage enhancements for venue owners. But he said neutral host networks represent the "Holy Grail" of DeWi because such a model could push huge amounts of traffic from overloaded commercial cellular networks and onto backup DeWi networks.

I can't help but chuckle at that prospect. I've been writing about the promise of "neutral host" networks  whether for Wi-Fi or inbuilding cellular  for years now. And every time I talk to a vendor about it, they assure me that the big US carriers are mere months away from launching widespread support for neutral host networks. Indeed, Celona's CEO Rajeev Shah told me just last week, at the MWC Vegas show, that it'll happen in the next few months.

Well, it hasn't happened yet. And I doubt it will anytime soon.

That all brings me to next year's MWC. Whether it's the one in Barcelona or Vegas, I'd love to hear these issues hashed out. Some fresh blood might help perk up the show's keynote stage.

To be fair, this year's MWC Vegas show did feature upstarts from the open RAN community and the satellite community. That's commendable; after all, both sectors do have the potential  however slight  to upend the status quo.

The same is true of DeWi.

More importantly, the DeWi concept helps shine a new light on the core mechanics of cellular networks in general. After all, the ongoing difficulties surrounding small cell deployments are now very clear. Perhaps a DeWi approach would speed things up? It's something I'd certainly like to hear about.

Coincidentally, DeWi is also a space that Dish Network is interested in. Dish, of course, is the company that is required by the US government to build a fourth nationwide 5G network. Dish also has a deal with Helium and an investment into Pollen. Dish officials did not cross the MWC Vegas keynote stage this year.

The perennial question at every telecom trade show is: "Have you seen anything interesting?" The shows that do are the ones I want to attend. And I'm not too picky. For example, WorldCom's Bernie Ebbers was probably the industry's first "telecom cowboy" in the 1990s. He eventually served 13 years in a federal prison for fraud. The rise and fall of Ebbers was nothing if not interesting.

Like what we have to say? Click here to sign up to our daily newsletter
COMMENTS
Newest First | Oldest First | Threaded View
Add Comment
Be the first to post a comment regarding this story.
EDUCATIONAL RESOURCES
sponsor supplied content
800G Client Optics in the Data Center
Next-generation broadband roadmap
The importance of environmental sustainability in telecom service providers strategy
Broadband Case Study Success Stories: The power of high-speed broadband to benefit consumers and improve society
The Economic Benefits of Juniper Apstra and CN2 in a Modern 5G Network
Location Data in the Digital Transformation Era
RAN Transformation for Dummies
White Paper: Security in Open RAN
Educational Resources Archive
More Blogs from DanoVision
Could 5G ruin the night sky?