Smart Cities Could Be Gold Mine for Telcos

It's slowly dawning on people that telecommunications infrastructure is at the heart of smart city development. I don't mean just connecting everyone and everything to the Internet. I mean figuring out how to build and maintain robust telecom networks that will be able to support electric utilities, transportation systems, educational institutions, public safety operations and much, much more at a fundamental level.

This is a huge opportunity for the telecom industry. And yet it's not at all clear that the industry is prepared -- mostly because smart city success is going to require network operators to work with local governments in ways they're not used to doing.

One thing is clear: Nobody's figured out the magic formula yet. 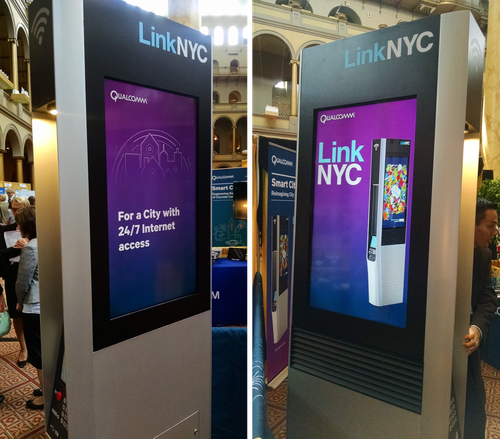 An early look at LinkNYC kiosks, which are now deployed throughout the city and delivering free WiFi service.

Purely from an infrastructure perspective, I've begun to think about smart cities by the layers of networks involved. There are the fiber networks that provide bedrock capacity, the wireless networks that are more often than not the direct interface for consumer communications and new sensor networks that will ultimately enable more machine-to-machine collaboration. City governments and ISPs are trying to create strategies around all three, but both sides still have a lot to learn, and that's a process Light Reading will chronicle.

Fighting for fiber
Consider fiber. Fights over fiber deployments are notorious. Whether it's Google Fiber Inc. illustrating how difficult it is for a non-incumbent provider to gain timely access to permitted sites for equipment installations, or it's Lumos Networks being asked to pay $2.50 per foot of network build by the city of Hopewell, Virginia even as a competitor is given access to the same right-of-way areas for free, the process for getting new fiber infrastructure installed is both time-consuming and expensive. (See Broadband Has a Problem on the Pole.)

Some municipalities are taking over ownership and operation of their own broadband networks, seeing that as an improvement over commercial alternatives. But in many cases, cities and private network operators are finding ways to work together. Some local governments are forming new types of partnerships with ISPs, like the city of Philadelphia's deal with Comcast Corp. (Nasdaq: CMCSA, CMCSK) to develop a fiber-based Institutional Network. (See In Philly, Comcast Trumps Muni Broadband.)

Others are investing in their own infrastructure and then making it accessible to private operators through an open access model as in Huntsville, Alabama. Still others are forming consortiums with nearby towns and universities to pool resources and attract private network investment like local cities and schools in the Piedmont area of North Carolina. (See Google to Weave Fiber to Huntsville, Ala. and Gigabites: NC Cities Issue New Gig RFP.)

There is no one-size-fits-all solution. Everyone is still experimenting.

Next Page: Gearing up for wireless

Phil_Britt 6/12/2017 | 7:58:44 PM
Re: Smart Cities I have to disagree about the availability of the grants. The Administration seems to be in full cutback mode, so federal dollars likely to be more scarce than ever before.
Reply | Post Message | MESSAGES LIST | START A BOARD

Joe Stanganelli 6/8/2017 | 7:31:01 PM
Re: Smart Cities @Gabriel: Certainly, if all of that money is coming out of municipal budgets alone. Usually, however (at least in the US), a great deal of that investment comes out of federal tax dollars.

Certainly, cities only have so much of that federal money to throw around, but as interest in the sector continues to grow, so too will those grants, I expect.

Joe Stanganelli 6/8/2017 | 7:29:20 PM
Fed $$$ With all of that federal grant money on the table for smart-cities projects, I fully expect massive RFPs and sales in this sector -- especially given the highlights of these projects.
Reply | Post Message | MESSAGES LIST | START A BOARD

Duh! 6/8/2017 | 1:40:28 PM
Re: Smart Cities The key question is whether Telcos and municipalities can see each other as strategic partners, or solely as revenue streams to be tapped.  Investors and political constituencies don't always see the value of win-win.
Reply | Post Message | MESSAGES LIST | START A BOARD

msilbey 6/8/2017 | 10:33:03 AM
Re: Smart Cities Agreed. Which is why the necessary partnerships between city governments and commercial network operators is so interesting to me.
Reply | Post Message | MESSAGES LIST | START A BOARD

Gabriel Brown 6/8/2017 | 10:31:21 AM
Smart Cities There's huge amount of value to be created in "Smart Cities". Anyone who lives in a city can see things that could be much, much better. Transport, most obviously.