Calix Gambles on a Software-Defined Reboot

In early June, at the historic St. Francis Hotel in San Francisco, Calix did something its executive team says it hasn't done in the company's 18-year history: gather an array of industry analysts and trade media to hear a company presentation. The occasion? What they believe is groundbreaking technology and business change within the company.

The event underscored two important aspects of what's happening at Calix Inc. (NYSE: CALX): First, that Calix's move to software-defined access has been a long time in the making but is now fueling freaky-fast new product introductions and expanding the company's potential market. And second, that Calix needs more people to understand and acknowledge the significance of what it's done in order to capitalize on its apparent market advantage because, to date, it remains the smallest player in market capitalization, by a wide margin, in an ever-shrinking field of access vendors.

By CEO and President Carl Russo's measure, Calix has spent the last decade, and particularly the last six-and-a-half years, transforming itself from a wireline access systems company to "a communications software and services company that, oh by the way, ships systems as well." The significant investment in time and talent -- Calix now has top executives it has plucked from Juniper, Commscope and Salesforce.com, among others, and a core group of developers it acquired with Occam -- has not made the company a Wall Street darling, however, and may have had the opposite effect. 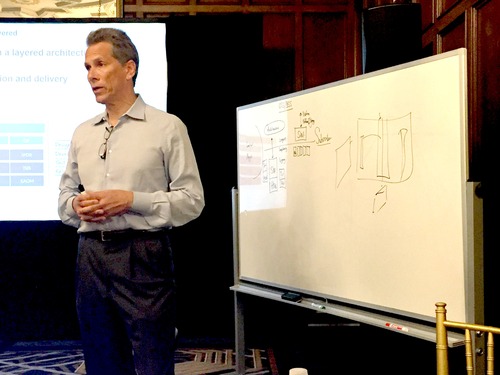 "There was a monumental effort. It was very well designed and will serve their customers very well," Kunstler comments.

Independent analyst Matt Davis heard what Calix executives had to say, but also saw it underscored by open praise from large customers or potential customers -- namely Verizon Communications Inc. (NYSE: VZ), via a Calix press release, and CenturyLink Inc. (NYSE: CTL), in the person of Frank Miller, vice president of architecture, speaking to the media/analyst event.

"I am normally very wary of words like first, newest, or unique," he comments. "What makes me more confident that they do have a time advantage over their competition is listening to their customers. It is often hard to get a top network executive from a company like Verizon to be quoted in your press releases and be on stage at your customer events, like CenturyLink was. To have them come out and talk about the differences in terms of speed-to-market this thing can enable gives me confidence that this wasn't just a line of bull."

Kudos from customers and analysts are great, as are significant revenue bumps in the last two quarters and a projected 10% revenue bump this year over 2016. But Calix continues to post losses, based on its higher expenses, and expects that trend to continue through 2017. Its market cap of just under $350 million is about a third of Adtran Inc. (Nasdaq: ADTN)'s at $974 million and a much smaller fraction of the bigger players in the field including Huawei Technologies Co. Ltd. and Nokia Corp. (NYSE: NOK).

So the company that survived the telecom bust of 2001, outlasting literally dozens of other access companies, must now prove its bold gamble on software-defined access can pay off and it can not only survive but thrive going forward.

Next page: The making of AXOS