Hold up
So far in France, the operator has signed up about 200,000 banking customers, thanks partly to a helpful push from its own staff (it reported around 67,000 employees at its French business at the end of September). Considering that Iliad, one of its French rivals, has captured more than 2 million mobile-phone customers in Italy since launching a telecom service there in May, Orange's banking number seems modest. But the rate of quarterly additions has been rising fast, and the target of 2 million French customers looks achievable if that continues. After adding Romania and Spain to its portfolio next year, Orange plans to enter Belgium, Moldova, Poland and Slovakia -- in all of which it already manages a telecom business -- between 2020 and 2023. (See Iliad Grabs 1M Customers by Day 50 of Italian Odyssey.)

It will be some time before any of this pays off, however. Fernandez does not expect to break even until 2023, and he estimates that launches in France and Spain will cost between 500 million ($567 million) and 600 million ($680 million) in adjusted earnings (before interest, tax, depreciation and amortization) between now and then. While this might be hard for some investors to swallow, Orange remains one of Europe's top performers in the telco market. And it expects banking profits to climb steadily starting in 2023. 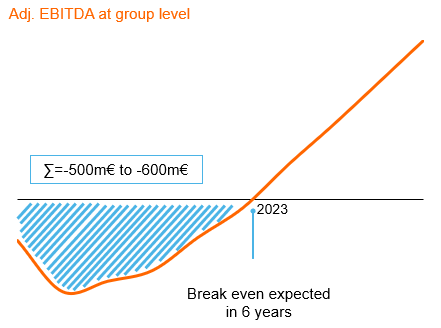 Before then, the initial hit comes mainly from investments in IT systems and customer acquisition costs. While Groupama came with some of the financial systems and regulatory know-how that Orange needed to launch a business, that takeover did not include the development and rollout of an AI assistant, for example. Orange has also had to recruit or train up advisors with the requisite financial qualifications: It had 1,100 of these on its books in October, up sharply from just 700 in April.

With its still-limited range of services, and lack of traditional branches, Orange seems unlikely to become the main provider for many customers. Indeed, some of the operator's senior executives appear to be using it as a "secondary bank" for the time being. Provided Orange can boost NBI per customer, that does not have to be a problem. But its targets assume this figure will double in France between now and 2026, to around 200 ($227), and only 30-40% of existing customers use the service daily, says de Leusse. Driving up engagement could turn out to be one of Orange's biggest challenges.

Executives think the main difference between Orange and other banks is cultural. Bankers usually want customers to feel guilty about overdrafts and borrowing, says de Leusse, while Orange wants to give them "personal control of finance." In France, however, the operator's chief advantage could be data. With no French equivalent of the US credit bureau, French bankers lack any central office to check on the credit history of their customers. Orange, however, has a readymade alternative thanks to its mainstream telco business. As it expands into loans, mortgages and other new types of service, that data could be like the perfect cheat sheet for the most grueling test.