Core router startups have been a rare breed since the glory days of Procket and Avici, but now a new one has emerged: Compass-EOS is hoping to move the needle (geddit?) by using on-chip photonics to produce a more compact system.

"We believe current technologies have reached a plateau. Everybody understands that. When you're talking about the petabit age, everybody will be using such technologies," says Asaf Somekh, Compass-EOS's vice president of marketing.

The router in question, the r10004, is being announced for the first time on Tuesday. It's an 800Gbit/s router (1.6Tbit/s, if you count both input and output traffic), shipping with only two types of line cards so far: with two ports of 100 Gbit/s or 20 ports of 10 Gbit/s.

The routers have been shipping since late 2012, and Somekh was carrying a sample of the company's pride-and-joy ASIC, based on a technology named icPhotonics, at Mobile World Congress last week. 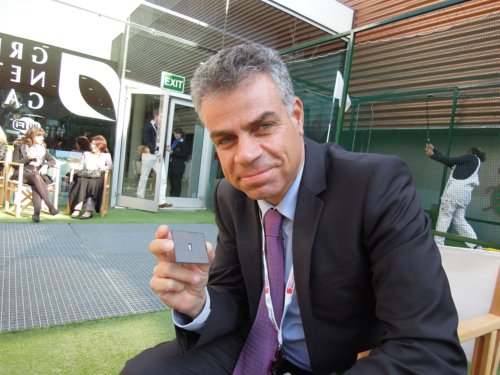 What's particularly interesting is that Compass-EOS's router is already running live traffic, which means the startup has gotten further than many of the core-router startups of the early 2000s. (See The Core Was Rotten for Startups.)

It's being used by a U.S. cable operator at the junction between the cable network and a content delivery network (CDN), Somekh says.

That's not a core core job, but it's where a startup has to, well, start before it can win the hearts of service providers. Early target markets will be Internet peering points and some aggregation networks, Somekh says.

Getting to the core
The company's founder and president, Michael Laor, worked at a Cisco Systems Inc. R&D center in Israel in 2004 when he decided to pursue a more compact architecture for a core router. This was the time when Cisco was releasing the CRS-1, formerly called the "huge effin' router" internally -- a full-rack beast that Cisco bragged could be linked in a group of 72.

Laor realized his ideas for radicalizing the router would never fly at Cisco, Somekh says, so he left the company to build a next-generation router with his own outfit.

It's already part of Compass-EOS folklore that Laor failed four times, primarily due to the limitations of the electronics. High-speed signals can only travel so far on a circuit board, and pushing the distance limits means generating more heat. The numbers weren't adding up.

Laor decided to pursue on-chip optics after teaming up with Michael Mesh, who had participated in the optical bubble as a member of PacketLight Networks. (You can see him quoted in this DWDM report from 2000.) They formed Compass-EOS in 2006, and Mesh is still with the company as chief scientist.

The icPhotonics chip is built around a matrix of 168 VCSELs -- each capable of transmitting at 8 Gbit/s for a total theoretical limit of 1.3 Tbit/s -- and a corresponding bank of photodiodes. Compass-EOS says it uses silicon photonics inside the chip, as well as some proprietary and not-so-easily-invented techniques that allow the VCSELs to sit properly above the rest of the chip.

Inside the r10004, there's no midplane, no backplane and no switch fabric. Line cards are connected by the optical interconnect into a full mesh.

Core routers from Alcatel-Lucent, Cisco and Juniper Networks Inc. can connect multiple boxes to act as one router. But to do it for more than two routers takes an additional box, a rack that serves solely as a cross-connect.

Compass-EOS claims it can eliminate that step and just keep throwing routers at the problem, so to speak. Each router treats neighboring Compass-EOS routers as if they were its own line cards.

There's a distance limitation, of course: about 200 meters. That's still long enough that two routers, working in conjunction, can be on different floors of a building. (There's at least one prospective customer that's apparently keen on that, judging by what Somekh says.)

Compass-EOS is bulked-up like a router company. It's got more than 150 employees and has raised more than US$120 million since 2006, from investors including Comcast Ventures, T-Venture (an arm of Deutsche Telekom AG) and even Cisco.

mendyk 3/14/2013 | 3:38:00 PM
re: Photonics Fire Up Radical Core Router Startup Yes -- it looks like Disqus can go only to 10 levels of responses before it collapses from exhaustion. Nigel Tufnel would not be pleased.
Reply | Post Message | MESSAGES LIST | START A BOARD

mendyk 3/14/2013 | 2:07:51 PM
re: Photonics Fire Up Radical Core Router Startup The rules have changed. The zebras are now being painted orange, with the assumption that they will grow longer necks and their stripes will turn to spots. We've pretty much done away with "journals" anyway.
Reply | Post Message | MESSAGES LIST | START A BOARD

Craig Matsumoto 3/14/2013 | 2:05:38 PM
re: Photonics Fire Up Radical Core Router Startup -áI see what you're saying, but i actually find it a good way to point out secondary information. Or to highlight something in the story without interrupting the main points. You also have to take into account the fact that many of us editors just don't know when to shut up. :)
Reply | Post Message | MESSAGES LIST | START A BOARD

desiEngineer 3/14/2013 | 12:33:19 AM
re: Photonics Fire Up Radical Core Router Startup There should be a rule that the first post can't be from an LR editor because if they have those comments, why not fix the article in the first place? -áThe journalistic equivalent of code reviews, peut-etre?
Reply | Post Message | MESSAGES LIST | START A BOARD

hoytaxtontrio 3/13/2013 | 10:27:12 PM
re: Photonics Fire Up Radical Core Router Startup -áFinally, something really meaningful to do.-á Can it go to one character width.
Reply | Post Message | MESSAGES LIST | START A BOARD

Garci 3/13/2013 | 7:49:19 PM
re: Photonics Fire Up Radical Core Router Startup To be honest, the whole DDOS part is bogus. ALU's boxes have done overall (central) Control Plane rate limiting since day 1. And no operator is under-utilizing the network due to COPP or similar mechanisms. Also, unless its cooled back-to-front, I find it hard to believe the presented chassis would be NEBS compliant, as I don't see how they can put replaceable air filters in there. Finally, as mentioned, the density is nothing spectacular either. 200G per slot is nothing new.
Reply | Post Message | MESSAGES LIST | START A BOARD