'No Facts, Wild Claims & Lots of Bluster'; Amazon Hits Back at Oracle's Ellison

In a keynote address Sunday night at Oracle Corp. (Nasdaq: ORCL) OpenWorld San Francisco, the Oracle chairman, co-founder and chief technology officer made a number of claims about his company's two competitors. (See Oracle's Ellison: Amazon & SAP Use Our Database Because We're Better.)

About Amazon, Ellison said that company's Redshift database is nine to 15 times more expensive to run than Oracle's upcoming Autonomous Database Cloud. He reiterated a guarantee that Oracle can cut bills in half or more for Amazon customers migrating to Oracle. 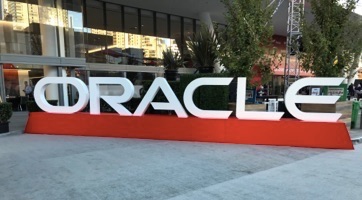 Oracle signage outside Oracle OpenWorld in San Francisco Monday morning.
Keep up with the latest enterprise cloud news and insights. Sign up for the weekly Enterprise Cloud News newsletter.

Amazon fired back at Oracle on scalability and did not respond on the other points:

"Yeah, that's factually incorrect," an Amazon spokesman said in email. "With Amazon Redshift, customers can resize their clusters whenever they want."

Also, enterprises can scale compute separately from storage "against their data in Amazon Simple Storage Service" using Redshift Spectrum, "and pay per query for just the queries they run. But most people know that."

The spokesman added, "This sounds like Larry being Larry. No facts, wild claims and lots of bluster."

As for SAP: Ellison said that SAP, too, uses Oracle services, rather than SAP's own HANA database. Specifically, SAP runs its SuccessFactors human resources service, which SAP acquired in 2011, on Oracle. SAP has two other software-as-a-service (SaaS) cloud apps and runs both on Oracle, Ellison said.

SAP responded Monday morning that SAP is following its own migration plans on its SaaS apps. SuccessFactors will migrate by March, and SAP Ariba supply chain services and SAP Hybris marketing services will be migrated by the end of the year.

mhhfive 10/15/2017 | 12:02:05 PM
Re: Never wage a land war with Amazon, and never challenge Bezos to death. Larry has presumably learned a few lessons about "selling the sizzle" from Steve Jobs. This is a slightly different market than selling to consumers, though.
Reply | Post Message | MESSAGES LIST | START A BOARD

kq4ym 10/15/2017 | 11:45:32 AM
Re: Never wage a land war with Amazon, and never challenge Bezos to death. Looks like "No facts, wild claims" Larry may indeed be digging that hole. But, in the real world "selling the sizzle" still often gets people to sign on the dotted line despite the lack of facts and proof of claims.
Reply | Post Message | MESSAGES LIST | START A BOARD

Mitch Wagner 10/3/2017 | 6:11:02 PM
Re: Never wage a land war with Amazon, and never challenge Bezos to death. Larry's real goal is to sell PaaS and SaaS. He can afford to slag Bezos on IaaS.
Reply | Post Message | MESSAGES LIST | START A BOARD

mhhfive 10/2/2017 | 5:14:32 PM
Never wage a land war with Amazon, and never challenge Bezos to death. I'm guessing Amazon is going to let Larry dig his own hole if he wants to try to start a price war with AWS. That doesn't seem like a smart move for Larry who supposedly knows all about the Art of War.
Reply | Post Message | MESSAGES LIST | START A BOARD
EDUCATIONAL RESOURCES