Cisco Returns to Growth, With Help From Network Automation

Cisco is making a transition from product sales -- switches and routers and other networking equipment -- to software and recurring revenue, including cloud. That seems to be going well; recurring revenue comprised 33% of total revenue, up two points year-over-year. (See Cisco: Enterprises Will 'Spend Differently'.)

In intent-based networking, Cisco's automation strategy announced in June, Cisco more than doubled its customer base for the Catalyst 9000 switching platform in sequential quarter, to over 3,100, the company said. (See Cisco's 'Network Intuitive': A Risky Transition.) 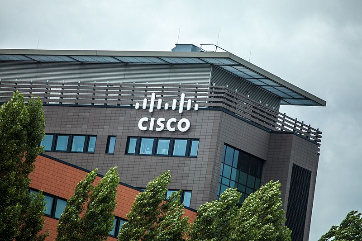 Photo by Diesmer Ponstein (Cisco Amsterdam - Flickr) [CC BY 2.0], via Wikimedia Commons
Keep up with the latest enterprise cloud news and insights. Sign up for the weekly Enterprise Cloud News newsletter.

"We're incredibly pleased with the early acceptance of the intent-based portfolio," Robbins said on an earnings call with analysts Wednesday. "The Catalyst 9000 is the fastest ramping product in our history."

Cisco plans to extend intent-based networking across the rest of its portfolio, beyond campus switching to routing, Viptela SD-WAN, Application Centric Infrastructure in the data center, and security. Cisco has as total of more than 800,000 customers. "So we obviously have room to run," Robbins said.

The commercial market -- small and medium-sized businesses, with employee counts under about 1,000 -- have been early adopters of intent-based networking. Bigger enterprises, with longer buying and evaluation cycles, are still evaluating, Robbins said.

Total product revenue was up 3%, with the infrastructure platform returning to growth, up 2%, with strong growth in switching, wireless, data center servers and Hyperflex storage. (See Cisco Turns Up the Heat on Hyperconvergence.)

That growth was offset by a "modest" decline in routing products, driven by continued weakness in the service provider sector, Kelly Kramer, executive vice president and chief financial officer, said on a call with analysts Wednesday.

Applications were up 6%, including collaboration, unified communications, conferencing and telepresence, as well as the Jasper Internet of Things and AppDynamics application optimization platforms.

Security was up 6%, with strong performance unified threat and web security.

By sector: Enterprise sales were up 3%; sales to small- and medium-sized businesses under about 1,000 employees, which Cisco calls "commercial," were up 14%; public sector was up 8%; and service provider revenue was down 5%.

Cisco increased its quarterly dividend 4 cents, up 14%, representing a yield of 3.1%, and increased its share repurchase program $25 billion to $31 billion.