Oracle wants to simplify the rollout of Internet of Things deployments through various enterprises, and the software giant is now offering to add a layer of machine learning, artificial intelligence and automation to ease the process for the company's customers.

On Thursday, Oracle added three additional components to its IoT Cloud Applications, which the company first introduced in February. The IoT cloud is designed as a software-as-a-service (SaaS) and platform-as-a-service (PaaS) offering and it supplies asset monitoring, connected workforce, fleet monitoring and production monitoring applications.

These three additional components of the IoT cloud include machine learning and AI, as well as "digital twins. These cloud upgrades are designed to help customers in manufacturing, supply chain, connected factories, fleet management and field service.

With the complications of large-scale IoT deployments, Oracle is looking to add a layer of automation to the supply chain process to remove some of the manual components, including people feeding data into the system. 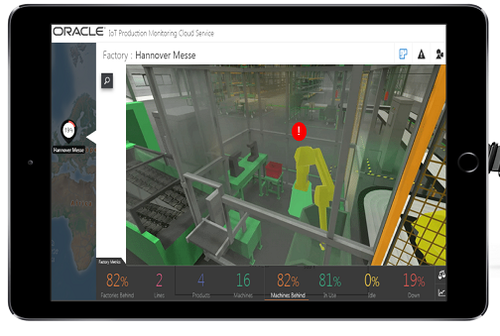 Oracle plans to add a dash of VR to IoT management
(Source: Oracle)

While many enterprises are still contemplating IoT and analytics projects, the industrial Internet of Things (IIoT) has begun to take off, especially in the manufacturing sector. One of the leaders is GE, which is using its own factories as a testing ground and has begun to offer its own Predix IIoT management platform to customers. (See GE Wants to Make the Industrial Internet More Predictable.)

"Customers want to reduce the time it takes to deploy IoT solutions and reduce costs," said Bhagat Nainani, group vice president of IoT at Oracle, before the August 31 announcement. "Some of our partners and customers told us that they have seen with these IoT applications is that they are able to deploy their IoT solutions up to two to three times faster."

The three main components Oracle is introducing on Thursday are:

In its efforts to draw more and more of its customers to its cloud offerings, Oracle has been working on updating much of supply chain and other software offerings. In July, the company announced Cloud Applications Release 13, which includes a series of under-the-hood feature updates and SaaS offerings for supply chain. (See Oracle Brings Supply Chain to the Cloud.)

In addition, Oracle showed off a small demonstration of using augmented reality (AR) and virtual reality (VR) with two new applications: Digital Field Service and Smart Connected Factory. These two features are designed for smart factories and can be used to guide repairs or help train employees.

Oracle did note that the VR and AR applications would not be ready for wide-scale deployments for at least another year or two as the technology improves.

mhhfive 9/7/2017 | 12:29:53 PM
Re: What is Oracle's edge in IoT? You point out that Oracle organizes conferences for these kinds of special topics, and that makes more sense. But I have to wonder how many in-house AI/ML experts there are at Oracle -- and how many they invite as speakers from other companies/organizations.
Reply | Post Message | MESSAGES LIST | START A BOARD

Susan Fourtané 9/7/2017 | 9:39:31 AM
Re: What is Oracle's edge in IoT? mhh, I see what you mean. IBM has been in the field of Machine Learning and AI for longer. Oracles approach, I believe, may be in organizing conferences. I have attended several of Oracles conferences, so I know about their technologies. But you are right, they have been less on the public side.
Reply | Post Message | MESSAGES LIST | START A BOARD

mhhfive 9/5/2017 | 11:57:19 PM
Re: What is Oracle's edge in IoT? I'm not saying Oracle should be discounted (or trifled with), but I haven't seen much public attention to its AI or machine learning capabilities.. Much like Apple has only recently started to allow its engineers to publish AI papers in peer-reviewed journals, I think Oracle might have some PR catching-up to do when it comes to customers thinking it has the right expertise. eg. IBM has been doing Watson and Deep Blue projects for decades now.....
Reply | Post Message | MESSAGES LIST | START A BOARD

Susan Fourtané 9/4/2017 | 11:12:37 PM
Re: What is Oracle's edge in IoT? Mhh, Oracle was one of the first companies to embrace and offer applications for supply chain digital transformation a few years ago already. It also puts emphasis in customer centricity, and develops its products with that focus in mind. Its a logical step for Oracle to integrate Machine Learning and AI to its IoT cloud.
Reply | Post Message | MESSAGES LIST | START A BOARD

danielcawrey 8/31/2017 | 4:22:44 PM
Advanced Clouds If Oracle is able to successfully support cloud technologies that are really advanced, it might have a growing business unit in that.

mhhfive 8/31/2017 | 2:23:50 PM
What is Oracle's edge in IoT? Does Oracle really have a Machine Learning advantage over other big tech companies? I'm just curious if anyone has an opinion of Oracle's chops when it comes to AI and related expertise....
Reply | Post Message | MESSAGES LIST | START A BOARD
EDUCATIONAL RESOURCES