Enterprises using Office 365 will want to hold off upgrading iPhones and iPads to the latest, greatest operating system version, as the Mail app on iOS 11 is incompatible with Office 365, as well as Exchange Server 2016 and Outlook.com.

More specifically, you can't send or reply to messages, according to an article on the Microsoft Corp. (Nasdaq: MSFT) support site. 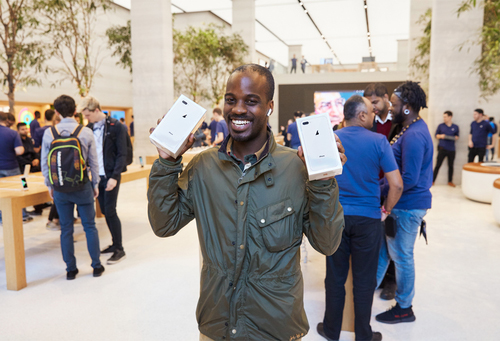 Man purchases iPhone at Regent St., London. He'll be less happy if he goes back to work and tries to get his Office 365 email. Photo from Apple.
Keep up with the latest enterprise cloud news and insights. Sign up for the weekly Enterprise Cloud News newsletter.

Microsoft and Apple Inc. (Nasdaq: AAPL) are working on a fix, and will post more information to the support article when it becomes available, Microsoft says.

Apple says on its support site that users experiencing the problem will see the error message "Cannot Send Mail. The message was rejected by the server." The two companies are working on a fix, and will resolve the problem in an upcoming software update, Apple says.

The bug persists despite users reporting this problem in the iOS 11 beta as far back as July.

"This really pisses me off," says a person on Reddit. "Apple has known about this ever since beta 4 or 5 and have done nothing about it. This is a big bug and lots of people use exchange servers."

The Register is having fun with this one. Attention adults working in the real world: Do not upgrade to iOS 11 if you use Outlook, Exchange. The article refers to Apple as the "Cupertino idiot-tax operation."

Susan Fourtané 9/23/2017 | 10:25:17 AM
Re: How funny Mitch,  I didnt know this was a problem for some people until after reading your article. What I found funny was my surprise to learn someone was having trouble with something I was so happy with. The new iOS has worked perfectly for me, everything works better than before, and my iPhone 6 Plus seems to be even faster. But you know all this, of course. I copied below what Apple says on its support Website. This is not Apples responsibility. Although many will use it against Apple.
Reply | Post Message | MESSAGES LIST | START A BOARD

Susan Fourtané 9/23/2017 | 10:16:54 AM
Re: How funny Mhh - On it support site, Apple says: Information about products not manufactured by Apple, or independent websites not controlled or tested by Apple, is provided without recommendation or endorsement. Apple assumes no responsibility with regard to the selection, performance, or use of third-party websites or products. Apple makes no representations regarding third-party website accuracy or reliability. Risks are inherent in the use of the Internet. Contact the vendor for additional information. Other company and product names may be trademarks of their respective owners.  So, its pretty much like I said. Apple offers users the possibility to use Office 365 if they wish to use it, but Apple is not responsible for things Apple has not developed or tested. It makes sense to me. Microsoft is then the one to blame.
Reply | Post Message | MESSAGES LIST | START A BOARD

Susan Fourtané 9/23/2017 | 10:05:51 AM
Re: How funny Mhh - What I find funny is that I am so happy with iOS11, and everything works so well and fast, faster than before, that I really thought everybody else was as I happy with iOS as I was. Before reading this article, I had no idea that someone was having trouble. I dont think Apple is to blame for this. The one behind Office 365 is Miccrosoft, not Apple. Apple is just offering access to it through its iPhones and iPads. Unless I am missing something, of course.
Reply | Post Message | MESSAGES LIST | START A BOARD

Not a Brit, but I <3 the Register and its sarcastic cheekiness on all things tech.
Reply | Post Message | MESSAGES LIST | START A BOARD

Joe Stanganelli 9/22/2017 | 10:56:15 PM
Re: How funny @Michelle: This is fairly typical. When was the last major or semi-major iOS update that DIDN'T have major, headline-snagging flaws? I can't think of a single one in the past few years.
Reply | Post Message | MESSAGES LIST | START A BOARD

Joe Stanganelli 9/22/2017 | 10:53:25 PM
Re: How funny @mhh: Apple and Microsoft aren't the cat-and-dog rivals they once were, and have worked together a lot recently. I'm not so sure Microsoft has a laissez-faire about compatibility here, exactly.
Reply | Post Message | MESSAGES LIST | START A BOARD

ECN's parent, Informa, uses Office 365, but we are standardizedon the Outlook app for iOS access. So we didn't miss a beat. Indeed, I didn't even know this was a problem for other people until very late yesterday.
Reply | Post Message | MESSAGES LIST | START A BOARD

I really do wonder what kind of interal struggles made this possible. Was one company staying silent while the other tried to work things out? Is there a major drama brewing behind those doors??
Reply | Post Message | MESSAGES LIST | START A BOARD

mhhfive 9/22/2017 | 3:23:53 PM
Re: How funny Probably not that funny for rank&file employees who just wanted to sent a few emails and get some work done... Is this a bigger mark against Apple or MSFT? Who will get blamed. MSFT isn't exactly known for making super-compatible software that doesn't break when used with other platforms, so it's not 100% Apple's fault, is it? Or will (or should) Apple shoulder all the blame in this situation?
Reply | Post Message | MESSAGES LIST | START A BOARD