A couple of startups with top pedigrees are looking to tackle big, audacious challenges in cloud computing.

Ampere, founded by former Intel Corp. (Nasdaq: INTC) president Renee James, is taking on her former employer with 64-bit ARM processors designed for the special needs of cloud servers. Also, Lightelligence, an MIT spin-off, is working on next-generation AI hardware based on "nano-photonics" -- using light instead of electrons.

Ampere's custom-core 64-bit server operates at up to 3.3GHz, with 1TB of memory and a power envelope of 125 watts. The processors are sampling now and will be in production in the second half of the year. 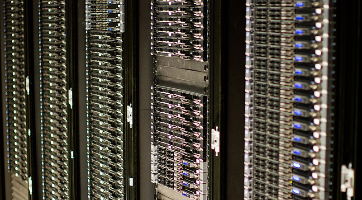 Servers. Photo by Victorgrigas (CC BY-SA 3.0)
You're invited to attend Light Readings Big Communications Event  – the one event that delivers fresh perspective on the rapid transformation of the telecom industry and the road ahead. We'll see you May 14-16 in Austin – communications service providers get in free!

James is Ampere's CEO, and it's backed by the Carlyle Group.

Ampere's architecture is designed to meet the needs of cloud applications, the company says. Workloads moving to the cloud require more memory while controlling power, size and costs. The architecture is optimized for cloud workloads such as artificial intelligence, big data, storage and database.

Ampere comes along at a time when the cloud server market is ripe for disruption. Cloud servers are now standardized on processors by Intel, but Intel is vulnerable. The Spectre and Meltdown vulnerabilities present opportunities for competitors, as those flaws have opened big security holes in Intel systems. (See Intel CEO Promises Chips That Fix Spectre & Meltdown Flaws .)

Qualcomm Inc. (Nasdaq: QCOM) has developed its own ARM-based server processor, the Centriq 2400, and is spoiling for a fight.

James was Intel's highest-ranking woman when she left the company in 2015 after nearly 30 years' service.

Researchers at MIT developed the technology, which will be licensed exclusively to Lightelligence. The founding team of the company worked as researchers at the university, the company says.

kq4ym 2/27/2018 | 11:56:11 AM
Re: Lots of competition Tackling the development of "processors designed for the special needs of cloud servers," seems to be filling a growing need, but I'm skeptical that all the startups are going to be big winners. It's still a big gamble in this fast growing field.
Reply | Post Message | MESSAGES LIST | START A BOARD

kq4ym 2/15/2018 | 8:06:16 AM
Re: Lots of competition It would seem that although "more memory while controlling power, size and costs," is the way to go in a logical development there's probably going to lots of competition in that area to outdo Intel, but I would think the light based circuit idea if successful in the near future will be the real game changer.
Reply | Post Message | MESSAGES LIST | START A BOARD

mhhfive 2/8/2018 | 10:22:24 PM
Re: Lots of competition I thought even AMD had some ARM chip designs for cloud services hardware... but I'm not sure if AMD is really following through with those chips.
Reply | Post Message | MESSAGES LIST | START A BOARD

mhhfive 2/8/2018 | 10:14:10 PM
ARM chips FTW It's fascinating that ARM designs are gaining ever more diverse applications in data centers and in handheld devices as well. SoftBank must be doing well!
Reply | Post Message | MESSAGES LIST | START A BOARD

mhhfive 2/8/2018 | 1:38:56 PM
Custom chips = more security? If security by obscurity works at all then custom chips that no one else uses might be somewhat more secure than generic hardware--- but of course there's still plenty of other vulnerabilities to exploit that have nothing to do with Intel chips.
Reply | Post Message | MESSAGES LIST | START A BOARD

danconde 2/6/2018 | 6:54:39 PM
Lots of competition There is competition such as ThunderX an ARM processor from Cavium, but I think it's good that people are looking at different compute systems.
Reply | Post Message | MESSAGES LIST | START A BOARD
EDUCATIONAL RESOURCES

Solving the complicated integration challenges of a digital transformation
How do your business processes stack up against the competition?
Successful cloud migrations require end-to-end services
A seamless approach to migrating data to the cloud
More Blogs from Wagners Ring
Podcast: Don't Call Us an SD-WAN Provider  Cato Networks