Spending on cloud infrastructure services jumped 46% year-over-year in the fourth quarter of 2016, "comfortably beating" growth rates in the previous three quarters, according to market research.

Amazon Web Services, Microsoft, Google and Alibaba drove the expansion "in large part" with "aggressive growth," according to a statement Friday from Synergy Research Group Inc.

Alibaba Group doubled its cloud revenues, enabling it to join the top five operators for the first time. 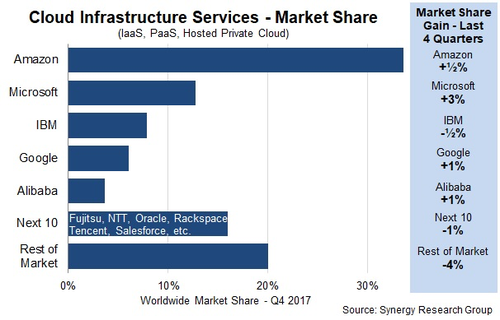 Clouds over Andersen Air Force Base.

"Meanwhile IBM maintains its position as the third largest cloud provider in the market, thanks primarily to its strong leadership in hosted private cloud services," Synergy says.

Quarterly cloud infrastructure service revenues have reached well over $13 billion, according to Synergy. The researcher includes infrastructure- and platform-as-a-service in its infrastructure findings. Full-year 2017 revenues grew 44% from the previous year's. The top five providers control almost three quarters of the market.

The top providers "are setting a fierce pace that most chasing companies cannot match. Smaller companies can still do well by focusing on specific applications, industry verticals or geographies, but overall this is a game that can only be played by companies with big ambitions, big wallets and a determined corporate focus," John Dinsdale, Synergy chief analyst and research director, said in the company's statement.

mhhfive 2/7/2018 | 11:09:36 AM
Re: Amazon.. If Google can't play in China, it will definitely lose out as others in China capture that market. Apple sees that. It's just tricky to do politically.
Reply | Post Message | MESSAGES LIST | START A BOARD

kq4ym 2/7/2018 | 8:43:26 AM
Re: Amazon.. With a doubling of revenues it's going to be very interesting to watch Alibaba in coming years, I would suspect it's going to pass Google and leave them in the dust if it keeps moving forward at that pace.
Reply | Post Message | MESSAGES LIST | START A BOARD

(I also wish this was a pie chart, not a bar graph...)
Reply | Post Message | MESSAGES LIST | START A BOARD
EDUCATIONAL RESOURCES