Behind every great cloud stands a hyperscale data center.

And as enterprise continues to rely more on cloud, whether it's infrastructure, platform or software delivered as a service, the sheer number of these hyperscale data center will continue to grow to support these businesses.

How many of these facilities are there throughout the world? A recent report by Synergy Research indicates that by the end of 2017, there will be nearly 400 hyperscale data centers scattered throughout the globe, with the majority -- about 44% -- located in the US. 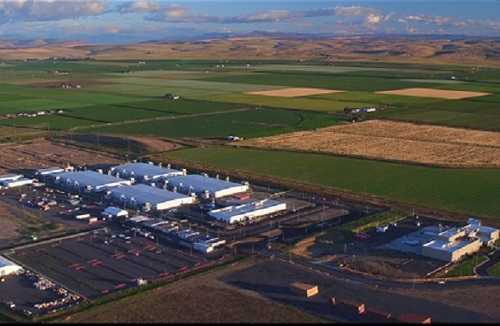 Unlike traditional, on-premises data centers, hyperscale facilities are unique for several reasons. Most are exclusively used to support vast cloud infrastructure, but they also share some other features:

Over the next year, the number of these hyperscale data centers will continue to grow, approaching the 500 mark in the next two years, so look for about 50 or so of these facilities to be built in 2018 and 2019 as demand grows.

This growth in hyperscale data centers follow the increasing demand for public cloud services, which Jefferies estimated was worth more than $35 billion in the third quarter of 2017 alone. (See AWS, Azure Lead $35B+ Public Cloud Market.)

As Synergy Chief Analyst John Dinsdale put it in a statement:

Hyperscale growth goes on unabated and we already have visibility of at least 69 more hyperscale data centers that are at various stages of planning or building. We will pass the 500 milestone before the end of 2019. It is remarkable that the US still accounts for almost half of all hyperscale data centers, reflecting the US dominance of cloud and internet technologies. Other countries are now featuring more prominently in terms of data center build, but even three years from now we forecast that the US will still account for some 40% of the worldwide total.

Not surprisingly, the biggest hyperscale builds are also the biggest providers of public cloud. Amazon Web Services Inc. , Microsoft Corp. (Nasdaq: MSFT), IBM Corp. (NYSE: IBM) and Google (Nasdaq: GOOG) each have 45 or more of the facilities in locations ranging from North America, to Latin America, to Europe, the Middle East and the Asia Pacific region.

Oracle Corp. (Nasdaq: ORCL) and Alibaba Group are also among the biggest global data center players, according to Synergy. 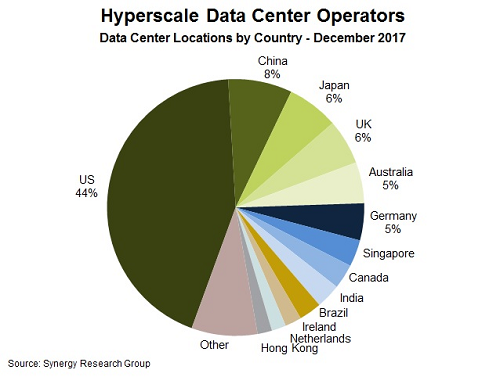 Other players, including Apple Inc. (Nasdaq: AAPL), Twitter Inc. , Facebook and others, tend to focus mainly within the US.

While the US is home to the largest number of these hyperscale data centers, China accounts for about 8%, while the UK and Japan each represent about 6%, according to Synergy.

The top three states identified  are Virginia, Texas, and Arizona. Each one oeprates a bit differently.
Reply | Post Message | MESSAGES LIST | START A BOARD

kq4ym 12/30/2017 | 4:30:21 PM
Re: Just a Start With "400 hyperscale data centers," now I would bet that China's current small percentage may grow pretty fast in coming years. I wonder how many of the centers are built with big incentives from local governments subsidizing through tax incentives and other goodies? That might be interesting to see.
Reply | Post Message | MESSAGES LIST | START A BOARD

danielcawrey 12/27/2017 | 1:40:50 PM
Re: Just a Start Good primer on hyperscale. I didn't know the technical details of what's inside these buildings. Hyperscale is exactly what it means: Efficient, powerfule and low cost for the amount of hardware deployed.
Reply | Post Message | MESSAGES LIST | START A BOARD

Phil_Britt 12/26/2017 | 5:20:41 PM
Just a Start Data needs continue to grow exponentially, so I would expect hyperscale data centers to grow at least as quickly in 2018.
Reply | Post Message | MESSAGES LIST | START A BOARD
EDUCATIONAL RESOURCES