Google co-founder Sergey Brin is building $100 million-$150 million airship that he plans to use on humanitarian missions and as a luxury yacht, according to reports.

The airship is under construction in Silicon Valley, and will be the largest aircraft in the world, according to a report in The Guardian. However, the airship will be smaller than the famous Hindenburg (here are some photos of the Hindenburg's luxury interior) or the US Navy's USS Macon, once based in the same hangars where Brin's aircraft is taking shape. 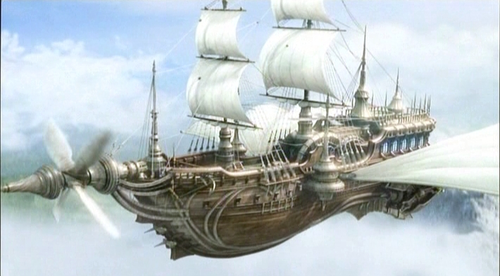 The airship Enterprise from the game Final Fantasy IV. Via Wikia.

The Guardian attributes the information to anonymous sources. Says the Guardian:

Brin wants the gargantuan airship, funded personally by the billionaire, to be able to deliver supplies and food on humanitarian missions to remote locations. However, it will also serve as a luxurious intercontinental "air yacht" for Brin's friends and family. One source put the project's price tag at $100m to $150m.

Enterprise Cloud News reached out to Google, which declined to comment.

Separately, Google has been working on Project Loon, high-altitude balloons to provide low-cost wireless Internet for developing areas, and recently won clearance to continue tests in Nevada through 2020. (See Oh, the Huge Manatee! Google's US Loon Tests Renewed Into 2020.)

Can Google make the grade as an enterprise cloud provider? Find out on our special report: Google's Big Enterprise Cloud Bet.
Like what we have to say? Click here to sign up to our daily newsletter
COMMENTS
Newest First | Oldest First | Threaded View
Add Comment
Page 1 / 2   >   >>

Michelle 6/9/2017 | 1:42:50 PM
Re: not the only big airship.. I thought I didn't mention armor, but I guess I did...that's not exactly what I meant. :) I was thinking more about the air ship's ability to defend itself should it come under attack - by pirates

JohnMason 6/6/2017 | 4:38:12 PM
Re: Humanitarian If we could turn the satellite into a luxury yacht, then that would probably work for the buyer. Can't criticize anyone for wanting to share their luxury yachts for humanitarian purposes. I was going to say, even the luxury QEII was used for non-commercial and non-luxury purposes during the Falkland crisis, but that was a military reason rather than humanitarian.
Reply | Post Message | MESSAGES LIST | START A BOARD

Mitch Wagner 6/6/2017 | 2:24:30 PM
Re: Humanitarian Why not just use satellite connectivity? Wouldn't that be easier?
Reply | Post Message | MESSAGES LIST | START A BOARD

Michelle 5/31/2017 | 11:46:52 PM
Re: not the only big airship.. You make a great point about the plane's performance in hostile environments. This thing should be amored against attack and have a defense system.
Reply | Post Message | MESSAGES LIST | START A BOARD

Michelle 5/31/2017 | 11:00:31 PM
Re: Humanitarian From a marketing & PR angle, it doesn't make a lot of sense. I wonder if the scope of the project will change after everyone else brings up the obvious disconnect.
Reply | Post Message | MESSAGES LIST | START A BOARD

[email protected] 5/31/2017 | 10:37:20 PM
Re: Humanitarian Michelle agreed we don't need a luxurious interior to transport supplies, food and medicine, the concept is kind of disconnected.
Reply | Post Message | MESSAGES LIST | START A BOARD

JohnMason 5/31/2017 | 4:39:25 PM
Re: Humanitarian I said it too awkwardly. I meant, because the airship is meant to be a luxury yacht, do any of the other considerations need to be justified? Looks like they are trying anyway, maybe to make it seem more palatable, but, what the hey, it's Brin's money.
Reply | Post Message | MESSAGES LIST | START A BOARD

Michelle 5/31/2017 | 2:22:14 PM
Re: Humanitarian I think they'll draw a lot of criticism for the "luxury" part. Why bother if the main goal is to deliver humanitarian aid? Save some dollars on the interior and put it towards those efforts...
Reply | Post Message | MESSAGES LIST | START A BOARD

[email protected] 5/31/2017 | 12:25:01 PM
Re: Humanitarian Hopefully not we don't need humanitarian marketing we need action especially with the current famine in Africa.