While Amazon Web Services' growth is slowing, the company's public cloud platform still dominates the market and remains larger than all its nearest competitors combined.

During the second quarter of this year, the cloud market reached about $11 billion in revenue, growing over 40% year-over-year. This type of rapid growth has buoyed nearly all the big cloud suppliers, but none have benefited more than AWS.

In terms of revenue, AWS controls about 34% of the overall cloud market. By comparison, Microsoft accounts for about 11% and Google at 5%. 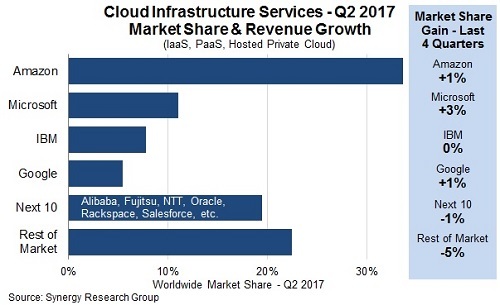 Despite AWS being nearly three times as large as its closest rival, Synergy found that it continues to grow its revenues faster than the overall market, and has continued to gain market share despite its already oversized role in public cloud.

"Some of the numbers are actually pretty spectacular. The year-on-year market growth rate is nudging down as we expected in such a large market, but it remains at comfortably over 40% and AWS alone generated revenue growth of $1.2 billion over the last four quarters," John Dinsdale, chief analyst and research director at Synergy, wrote in the July 27 report.

The news of AWS's cloud dominance comes as Amazon released its second-quarter financial results Thursday, which showed its cloud division with net sales of $4.1 billion, which is up from the $2.9 billion it booked a year ago. However, as Enterprise Cloud News Editor Mitch Wagner wrote, these are not the growth rates AWS saw a year ago. (See AWS Engine Pulls the Amazon Train in Q2.)

Although they don't rank in the top four, Oracle and Alibaba Cloud also made some headway in the report. The two companies reported the highest growth rates of any of the other providers, and Alibaba now ranks fourth in IaaS thanks to growth in China and expansion abroad.

The losers in this race, however, are the smaller cloud providers, which collectively watched their market share shrink by about 5% as the hyperscale companies gobble up more and more of the market, which should continue to increase at an annual growth rate of about 25%.

"The increasing dominance of hyperscale players continues to play out, with all four leading companies having cause to celebrate," Dinsdale wrote.

JohnMason 8/2/2017 | 1:12:59 PM
Re: overall growth That seems to have been Amazon's strategy--along with heightened application of technology--since their huge capital infusion at their initial public offering.
Reply | Post Message | MESSAGES LIST | START A BOARD

Phil_Britt 8/2/2017 | 3:03:06 AM
Re: overall growth In many businesses, the big guys win. Though I don't know that AWS does this, other parts of Amazon have operated with little or no profit to build market share. The little guys dnon't have the wherewithal to do this.
Reply | Post Message | MESSAGES LIST | START A BOARD

JohnMason 7/31/2017 | 2:58:09 PM
Re: overall growth Probably just temporary--some minor market hesitance because of the uncertain implications of the change to customers.
Reply | Post Message | MESSAGES LIST | START A BOARD

Scott_Ferguson 7/31/2017 | 12:11:01 PM
Re: overall growth @John: You are right in that was one point of the report that was kind of burried in the bottom of the report with all the emphasis on AWS. You would have hoped this market would have boosted the smaller guys, but it seems that seems to be the companies that MSFT, GOOG and AWS are drawing customers from.

JohnMason 7/31/2017 | 11:55:38 AM
overall growth I am disappointed that some of the top competitors' growth was borrowed from smaller companies. I would have thought that overall market growth would have carried the entire industry upwards. If the trend continues then I would want to analyze why the pack is starting to feed on itself, when there seems to be still very many new hunting grounds to explore.
Reply | Post Message | MESSAGES LIST | START A BOARD
EDUCATIONAL RESOURCES