Amadeus principally provides reservation systems and scheduling for travel agencies, as well as inventory management and pricing solutions. It's a time-sensitive business -- you can't sell a hotel room for last night, and you can't sell a seat on an airplane after take-off.

More recently, Amadeus has provided enabling technology for shopping platforms such as Kayak. Consumers on those systems make extremely idiosyncratic types of searches -- some know precisely where they want to go and when, others just know they want to go to South America over the summer and are looking for deals. A single query from a consumer can easily generate 10,000 internal queries to the website and Amadeus internal systems, Dietmar Fauser, Amadeus IT Group S.A. vice president of core platforms and middleware, tells Light Reading.

Amadeus looks to open source and the cloud to deliver solutions with the agility its customers demand, and also to retain control of the technologies on which the company has built its business. 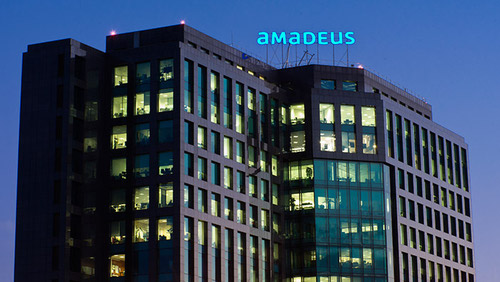 Photo by Amadeus.
Boost your knowledge of cloud-native software and innovations driving data center transformations! Join us in Austin at the fifth annual Big Communications Event May 14-16. The event is free for communications service providers -- secure your seat today!

Amadeus has been containerizing its applications to achieve software scalability, Fauser says. Promotional activity, for example, can result in meteoric increase in demand on virtually no notice, and the applications have to scale to meet that demand.

And containers and microservices also improve developer efficiency, Fauser says. Developers can update code more frequently, with reduced likelihood of failure, as microservices break large applications into small pieces with faster release cycles. "The idea is to move to ship on a daily basis and use CICD pipelines." CICD stands for Continues Integration and Continuous Deployment, an application delivery process that emphasizes incremental change over big, infrequent updates.

"We have relatively strict design philosophy that forbids the team to use cloud-native features," Fauser says. "That's where OpenShift brings the value. It's the new operating system -- it's not managing the computer; it's managing the data center."

By deploying to OpenShift, Amadeus avoids cloud lock-in -- but are they then concerned about being locked in to OpenShift?

"We are to some degree, but you have to make choices in life," Fauser says with a wry smile. OpenShift is open source, which mitigates the risk of lock-in significantly. "We could use the open source version of OpenShift and manage it ourselves if Red Hat goes crazy," Fauser says. Amadeus has 8,000 IT engineers, and could create a team of 3040 people to maintain OpenShift internally if necessary.

Amadeus started using OpenShift in 2014. "It really took off for product traffic at the end of 2016," Fauser says. Many large applications are now running on OpenShift, with a five-year plan to continue application migration.

The open source nature of OpenShift allows Amadeus to understand how the code works, which is very important to the organization. "We operate applications that are critical to the travel industry," Fauser says. "At the end, we have to have a solid understanding of the platform."

Amadeus has a 20-year history of using Linux. Prior to the OpenShift migration, most of the infrastructure was written internally. "Gradually we invest less and less in home-written infrastructure and rely more on open source solutions," Fauser says.

Open source helps Amadeus attract talent, Fauser says. "We tend to believe the best people are attracted to open source," he says. "People are more motivated to work on open software stacks than on VMware, for example, where you don't have any clue what the code structure is internally."