Under a partnership set to launch on January 29, Verizon will offer new Fios 1-Gig customers the Stadia Premiere Edition, a package that includes a game controller, a 4K-capable Google Chromecast Ultra streaming device and three free months of Stadia Pro, a subscription gaming service that supports streaming at 4K/60 frames-per-second and Dolby 5.1 surround sound. (Stadia users that don't take the Pro subscription can stream games at up to 1080p resolution and 60 FPS.) 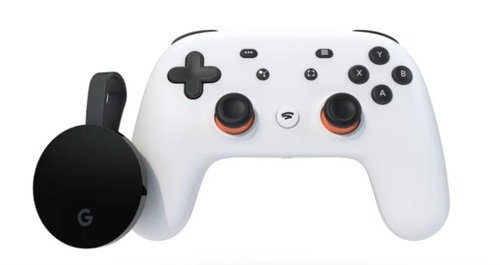 Along with the Stadia bundle, Verizon noted that new Fios 1-Gig customers on a "Mix & Match" plans are also get the telco's new home router with integrated WiFi 6.

Verizon said a similar Stadia promotion for 5G Home, its fixed wireless broadband service delivered over millimeter wave spectrum, is "coming soon" but didn't elaborate. However, Verizon noted that the Stadia promo stacks on top of the free year of Disney+ that's currently being offered to new Fios gigabit and 5G Home customers and to customers on unlimited mobile plans.

Google Stadia's heavy data demands should fit well with Fios's 1-Gig speeds and uncapped usage policies. Per Stadia's FAQ, the service requires at least 10 Mbit/s for a 720p experience, but needs 35 Mbit/s or more with a compatible TV paired with the Chromecast Ultra device to play games in 4K.

Even at 1080p, Google Stadia's gobbles up more than 100 megabytes per minute, and, depending on other resolution options, could chew up to 4.5 gigabytes to 20GB per hour, according to this VentureBeat review and assessment of the cloud gaming service. "What this means is that if you have a data cap, Stadia is going to add up quickly," the reviewer explains, adding that just 50 hours of Stadia gameplay at 4K resolution would reach the monthly 1-terabyte data limit Comcast has set for residential broadband service in all regions save for its northeast region (Comcast also offers an unlimited data option in regions where it has a residential broadband data policy).

Why this matters
The Verizon-Stadia partnership represents another value add for Verizon as it attempts to boost the number of customers that opt for its top-shelf, 1-Gig Fios service and new Mix & Match plans, while also setting the table to apply similar perks to its relatively new 5G Home offering.

This promo might also put pressure on other broadband providers, including cable operators, to pursue similar types of partnerships. The Verizon-Stadia connection is another clear example of how ISPs are catering to gamers with premium-level offerings. Cox Communications, for example, has been testing a low-latency service called Cox Elite Gamer (a white label version of the WTFast service) that starts at an additional $14.99 per month.

The broader cable industry has put a finer focus on online gaming with new low-latency capabilities that are now part of the DOCSIS 3.1 specifications and will also be part of the new DOCSIS 4.0 specs.

As another prime example, a UK-based service called Ghost Gamer Broadband is entirely focused on online gamers. Relying on a blend of fiber-to-the-premises, Gfast, fiber-to-the-curb and even ADSL access networks, Ghost Gamer Broadband touts fast speeds, low latencies and no data limits using a "specialist network" that links to Xbox, Steam, Twitch, Amazon and Google. But speeds vary by access network type -- up to 300 Mbit/s on Gfast and FTTP, up to 78 Mbit/s on FTTC and just 16 Mbit/s on ADSL.

Instead of having to keep pace with newer video cards, Google would host the games on high end hardware.  The challenge that they have is two-fold.  First, they don't have access to many games that people want to play.  Without that, Stadia is sunk.  Secondly, the primary issue with games is not network or even video.  The issue is fun.  If a game is fun, then it will be popular.  Games that try to compete on video quality often lose on fun.  Older games that you might not be aware of like Dark Souls have an ongoing player base, where some of the newer games just are not as much fun.

brooks7 1/23/2020 | 3:03:53 PM
Re: Overkill And I would also add that Stadia is not exactly tearing it up.  It is all about content when it comes to games.  Everything else is a solved problem.  Networks are simply not that important to gaming.  MMORPGs were developed with dial-up in mind.  FPS shooters with 1.5Mb/s DSL.  The limitations almost always boil down to the graphics card and disk speed.  The actual data sent to represent the actual moving pieces of the game is REALLY small (location, avatar, movement).

Conversely, Stadia's premium service wouldn't have much of a business case if it required 1G service.

Maybe someday there will be mass-market use cases that realistically can utilize 1G broadband service. "Someday" is not now.

Jeff Baumgartner 1/22/2020 | 12:44:04 PM
Google Fiber & Webpass Seems like a promo with Google Fiber and Webpass involving Stadia would be a given. While Verizon has a lot more reach and subs than Google Fiber, I"m kinda surprised that Google didn't do a Fiber/Stadia bundle right out of the chute. JB
Reply | Post Message | MESSAGES LIST | START A BOARD
EDUCATIONAL RESOURCES