Vodafone's new enterprise cloud partnership with IBM is a collision between cloud and connectivity. "You're not going to be able to take advantage of the cloud without being able to connect to it," Michael Valocchi, managing partner of the communications sector of IBM Business Services, tells Light Reading.

Simply connecting to the cloud and using it as a data repository brings benefits, but connectivity becomes an increasingly complex requirement as enterprises look to the cloud for digital transformation "The opportunity increases, but so does the complexity," Valocchi says.

That's the trend driving the partnership between IBM and Vodafone, announced in January, of which Valocchi is co-leader, along with a Vodafone colleague.

For the partnership, IBM brings to bear its own IBM Cloud platform; as well as its Multicloud Manager to connect to Amazon Web Services, Microsoft Azure, Google, Salesforce and other cloud platforms; IBM's blockchain services; and IBM professional services teams and methodologies.

Vodafone provides connectivity to move data from connected devices, to the edge, to the cloud, and back again. Vodafone brings to the partnership its mobility connectivity and networks, including 5G rollouts in Europe, software-defined networking skills to transform networks for global enterprise customers, and Internet of Things platforms. Vodafone already provides connectivity to 80 million business and industrial devices. And as Vodafone rolls out its edge computing capabilities, those become available to the partnership and its enterprise customers as well, says Greg Hyttenrauch, Vodafone director of cloud and security, the other co-leader of the Vodafone-IBM partnership. 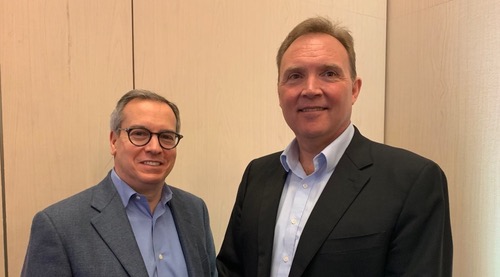 The partnership is launching with offices in the UK and later in Germany, and training their separate teams on operating as a single unit.

"We feel it's essential the customers think they're working with one entity," says the Vodafone man. "We don't want customers to see clunky handoffs."

However, the two companies stopped short of forming a legal joint venture, to get to market faster and avoid legal complications and the requirement for shareholder approval, Hyttenrauch says.

Vodafone has a history of cloud partnerships: It first partnered with Alibaba several years ago to provide enterprises with a uniform cloud platform spanning Europe and Asia, Hyttenrauch says.

As an example of how the partnership might work, the two companies cite agriculture. Farmers, coops, and the banks that serve them want to increase yield and reduce waste. They connect sensors around crops, in the soil and in the air using drones. "Farms by their nature are rural, wide expanses, and ability to connect to IoT is limited," Hyttenrauch says. "We can offer connectivity with private network solutions." Vodafone can also capture data to its edge platform, and perform compute there.

"We can collect all the information about the farm, but what do you do with it?" Hyttenrauch says. Thats where IBM comes in. IBM can provide data analysis, combining with weather data from IBM-owned Weather Company, using Watson for analysis, and blockchain to manage the complex supply chains inherent in agriculture.

Part of the partnership is a $550 million deal for IBM to take over management of Vodafone's data centers.

Separately, the two companies have had mixed success in the areas the joint venture addresses. Vodafone Business service revenues declined by 0.5% in the third quarter. Those services comprise 30% of Vodafone Group service revenues. The good news was that fixed, representing 32% of segment revenues, grew 3.5%, driven by market share gains and strong growth in cloud services, but that growth was offset by a mobile decline of 2.2%. However, IoT connectivity revenues grew strongly, with 27% growth in SIM connections, to 80.9 million.

So for Vodafone, the IBM partnership strengthens its business services in the areas where those services are already strongest: cloud and IoT services.

IBM saw full-year cloud revenue up 12% to $19.2 billion in its most recent quarter -- a fraction of the rate of the overall market, but IBM sees itself as operating in a high-value segment of that market, helping enterprises move mission-critical workload to hybrid platforms from multiple cloud providers.