After trickling a few details in February about a new "broad pay" streaming service, ViacomCBS offered an update today, announcing that the successor to its CBS All Access streaming service is on track for launch in "early 2021."

The new, internationally-focused offering, billed as the "first major step in transforming CBS All Access into a rebranded super service," will be launched under a new, yet-to-be-unveiled brand name.

Content from premium service Showtime, including originals, will also be featured. Meanwhile, the media giant has already been beefing up the legacy CBS All Access service via the addition of 3,500 episodes from the ViacomCBS portfolio (including content from BET, Comedy Central, Nickelodeon and Smithsonian), pushing the total library past 20,000 movie and TV show titles.

ViacomCBS will need to pump out originals at a greater clip for its successor to CBS All Access, industry analyst Colin Dixon says.

Though the new service will mark a relaunch of CBS All Access, the debut of the new super-sized offering will add to an already crowded field of premium, subscription streaming services. That group includes the usual suspects (Netflix, Amazon and Hulu) alongside relatively new services from NBCU (Peacock), Disney (Disney+) and WarnerMedia (HBO Max), and a new direct-to-consumer OTT service from Discovery that is approaching the finish line.

Upping the tempo
Revamping the flagship CBS All Access service, which launched back in the fall of 2014 into a broader streaming offering, makes sense in the wake of the CBS-Viacom merger, Colin Dixon, founder and chief analyst at nScreenMedia, said.

But ViacomCBS, he warned, will need to retain a relatively modest price on the new offering. CBS All Access currently sells for $5.99 per month with ads and $9.99 for the commercial-free version.

Another critical need going forward, Dixon adds, is for ViacomCBS to boost the frequency of new, original programming well beyond what CBS All Access offers today.

To keep churn levels down, ViacomCBS "will need a higher tempo than they're currently delivering," he said, noting he expects that the new, broad pay streaming service to eventually become a "first stop" for much of ViacomCBS's latest fare.

"If they expand content and keep the price fairly modest, they should do pretty well," he said.

Covering all the bases
Dixon also likes that ViacomCBS isn't painting itself into a distribution corner, as it's also expected to take advantage of Pluto TV, the company's popular, free ad-supported OTT service, to help promote shows and movies that will appear on the super-sized subscription offering.

ViacomCBS will also continue to license some of its content, as it's done under a recent deal with NBCU's Peacock streaming service. But the trick will be to strike the right balance  how to spread some of ViacomCBS's key content to other offerings without diluting its new flagship streaming product – Dixon said.

Next year's international rollout will include Australia, Latin America and the Nordics, with more to follow, according to Variety. David Lynn, president and CEO of ViacomCBS Networks, told the pub that the content offering for the new super-sized streaming service will vary by market.

Among some of the streaming-pertinent numbers from ViacomCBS's Q2 2020 results, domestic streaming and digital video revenue climbed 25%, to $489 million, while total paid streaming subscribers across all streaming properties surged 74%, to 16.2 million, versus the year-ago period. 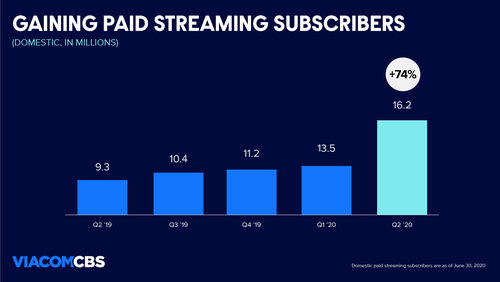