Broadband led the way again for Comcast in Q3 2020, as the cable operator added a record 633,000 residential and business broadband customers but shed another 273,000 video customers.

Comcast said it is trying to beef up mobile sub growth as more of its retail stores open up following temporary closures due to the COVID-19 pandemic. The MSO is looking to drive more mobile sales activity through its digital channels.

Tied in with today's results, Comcast also outlined three "core tenets" that will drive a strategy now focused on broadband, content aggregation and scaling up its tech platforms for streaming. 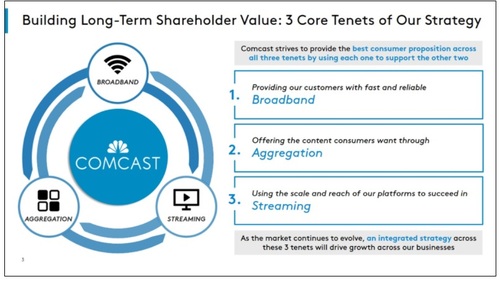 Broadband growth across the board

Comcast signaled last month that it would rake in more than 500,000 broadband subs in Q3. Watson said the cable operator has been able to gain share "across the board" from wireless providers, telcos (particularly from DSL) and the multiple dwelling unit (MDU) sector.

Xfinity Flex, Comcast's free streaming video/smart home product for broadband-only customers, has helped the company retain its broadband base. Flex, which has about 1 million active users, has cut churn rates by 15% to 20% among new broadband customers that engage with the platform, Watson said. Flex has also helped to offset Comcast's pay-TV subscriber losses for the past two quarters, he added.

Sizing up a 'global tech stack'

Like other cable operators, Comcast is seeing its pay-TV base continuing to erode, and the company expects to get hit with similar video subscriber losses in Q4 2020. However, Comcast appears poised to accelerate the syndication of the software and overarching tech stack that drives X1 and Flex  both in the US and abroad.

"The goal of our common tech stack is to build once and deploy as many times in as many markets and in as many ways as possible on our network or through wholesale distribution," Brian Roberts, Comcast's chairman and CEO, said on the earnings call this morning. He noted that the approach generates "good margins" for the company.

Comcast is also pursuing licensing opportunities in smart TVs and other types of retail devices, a move that could pit it against streaming platform giants such as Roku, Google (Android TV/Google TV) and Amazon (Fire TV), as well as TV makers with their own stacks  Samsung (Tizen) and LG Electronics (webOS).

"We will look at all options going forward," Watson noted.

Roberts also hinted that Comcast is working to unify some of the technologies and software architectures in use today by the company's US cable operations and Sky, the UK-based media company that Comcast acquired two years ago.

That work could result in a "global tech stack" that the company could offer on an international basis, and start with Sky, Roberts said. "I think you will see that in future products  as a result of our ability to do that."

Comcast is also dropping clues about its plans to build out its own cellular infrastructure, at least on a targeted basis, which would effectively complement its MVNO arrangement with Verizon. Notably, Comcast was one of several cable operators that bid for and won CBRS spectrum, which it could use to offload mobile traffic in high-traffic areas.

"We have the ability to evolve this [mobile] offering over time to where we choose to include our own wireless network with cellular infrastructure to generate even greater profitability in the most highly trafficked mobile areas," Roberts said.

Peacock, NBCUniversal's new streaming service, is closing in on a better than expected 22 million signups since its national launch in July (NBCU has not broken out how many of those signups are for the completely free version of Peacock and its two subscription-based tiers). And the media giant expects those numbers to climb following its recently struck distribution deal with Roku.

Peacock, which offers a mix of free, ad-supported premium and ad-free premium tiers, is "just seeing the effects of the Roku deal kicking in," NBCU CEO Jeff Shell said.

Although it's still early days, Shell said Peacock is seeing good engagement with its live streaming of Premier League soccer matches, as well as with catalog content from NBCU and some licensed fare such as Yellowstone.

"The fact that we have such a deep library of familiar stuff is kind of the opposite of Quibi," Shell said, referring to the failed mobile-focused, short-form streaming startup that is shutting down and looking to sell off assets.

Cable capital expenditures dropped 2.5%, to $1.8 billion, representing 11.8% of cable revenues, a figure that has improved by 60 basis points year-over year.

Comcast has recorded COVID-19-related severance and restructuring charges of $239 million year-to-date, with an expectation that the company will incur charges that roughly double that amount in Q4 2020, according to Comcast CFO Mike Cavanagh.