Meanwhile, Comcast's business services unit, a long-standing growth engine for the company, remained pressured by the pandemic but did see some promising indicators as states started to open up in the period.

Comcast also shed some light on Peacock, NBCU's new premium service, announcing that it has lured more than 10 million sign-ups since its national debut on July 15. NBCU has not yet released other metrics it will tie to the new service, including monthly active accounts. 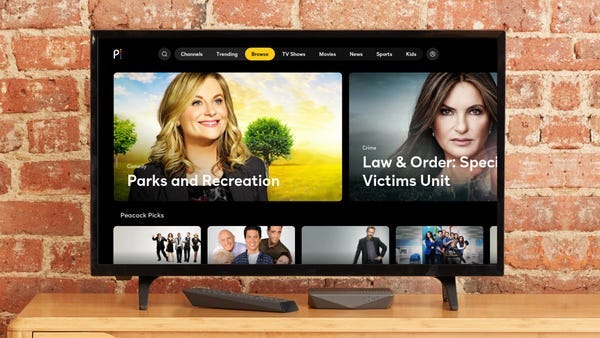 Peacock, which launched nationally on July 15 following an early preview on Comcast's X1 and Flex platforms, has secured more than 10 million sign-ups.

Broadband
Broadband growth remained strong at Comcast, as the operator raked in another 340,000 residential data customers (but lost 17,000 business broadband subs), marking the cable operator's best Q2 result in the category in 13 years and blowing away Wall Street expectations of about 200,000 broadband adds. Comcast ended the period with a total of 29.42 million broadband subs.

"Our focus remains on broadband," Dave Watson, president and CEO of Comcast Cable, said, noting that about half of the homes and businesses in Comcast's footprint now get broadband from the company. "We're optimistic about the runway ahead  We're taking share across the board."

Comcast didn't offer any new numbers for Flex, the video streaming/smart home offering it bundles in for free to broadband-only customers. Flex (1 million devices deployed, per Comcast's count in May) recently integrated its first virtual multichannel video programming distributor, Sling TV, but the company was non-committal about when more might be added. Others will be evaluated on a "case-by-case basis," Watson said.

Watson also noted that, unlike US cable peer Charter Communications, Comcast is not participating in the first round of the Rural Digital Opportunity Fund (RDOF) auction, holding that the cableco has relatively few adjacent areas to offset the regulatory costs associated with the auction. However, Comcast continues to explore other ways to expand its footprint at the edges, he said.

Mike Cavanagh, Comcast's CFO, said video sub losses in Q3 are expected to be similar to those in Q2, primarily due to the lingering effects of rate increases implemented earlier in the year, the overall economic pressures of the pandemic and the operator's limited ability to perform in-home installs.

Cavanagh attributed the slower wireless sub growth to Comcast's closure of a majority of its retail stores in Q2 due to the pandemic.

Business services
Business services revenues rose slightly  to $2.0 billion from $1.93 billion a year ago  but were down from the $2.04 billion pulled in during Q1 2020.

The segment has been hurt during the pandemic as some business customers paused service and others were forced out of business. However, Comcast said it has started to see some sequential, albeit modest, improvements in net additions as some states started to open back up.

"With small business bankruptcies looming, it is now a potential trouble spot," Craig Moffett, analyst with MoffettNathanson, explained in a research note. "As small business failures begin to be felt, these results are likely to remain under pressure"

Breaking movie windows
Chunks of today's call centered on a new, groundbreaking deal between Universal Pictures and AMC Theaters that shrinks the theatrical window for Universal films to a minimum of 17 days. That deal opens up options for Universal to offer films in a new in-home Premium VoD window that has emerged during the pandemic.

"We've always believed that PVoD can be a complement rather than a replacement for a robust theatrical release," Shell said, noting that the company believes this approach will put it in a position to better serve a segment of the population that simply does not go to theaters. Shell also thinks this revised model with AMC Theaters, which is currently limited to the US, will help NBCU tap into a new incremental revenue stream while also preserving a theatrical window that remains "critical" to the film industry.

He also stressed that the 17-day theatrical exclusive window is only a minimum period that could be extended if a particular title is having a good run at the box office.