Adding a new wrinkle to its Internet-connected X1 and Flex platforms, Comcast is set to debut Watchwith, a new interactive livestream application that will initially connect with new Bravo reality TV series "The Real Housewives of Salt Lake City."

Comcast, which has been teasing the Watchwith app for months, is activating the app today at 9:30 p.m. ET in the form of an exclusive, live pre-show stream that will let viewers interact with all six new "Housewives" cast members  including the ability to live-Tweet questions using the #RHOSLC hashtag. The audience will also have the chance to collectively unlock never-before-seen clips during the livestream by utilizing the app's "Sneak Peek" polling feature. 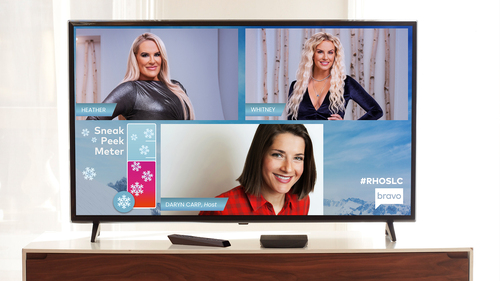 Tonight's Watchwith livestream will include a polling feature to unlock new clips from the Bravo show.

That event, to be hosted by Bravo's Daryn Carp, will mark the first time a network has offered an interactive livestream experience around their content directly to the TV, Comcast said. Bravo is owned by Comcast's NBCU. 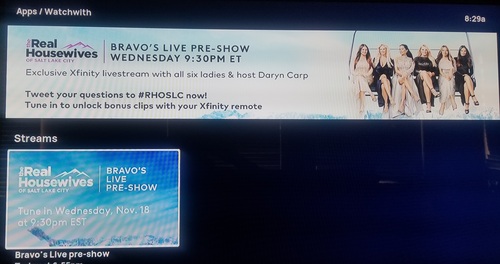 The Watchwith app on X1 appears geared up for tonight's livestream.

Viewers will be able to access the interactive livestream by clicking on the Watchwith tile in the apps menu or by saying, "The Real Housewives Fan Club" or "Watchwith" into their voice remote.

For east coast viewers, tonight's Watchwith livestream will immediately precede a new episode of the series at 10 p.m. ET on Bravo. Viewers can also access a replay of the pre-show event via the Watchwith app on X1 and Flex. 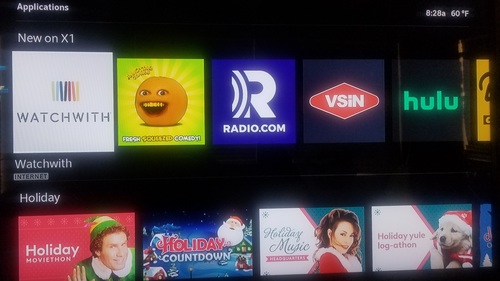 Comcast has been teasing the Watchwith app for months on its X1 and Flex platforms.

Comcast has yet to announce what other Watchwith live events might be in the works, but the new capability adds a layer of interactivity and engagement for both X1, the cable operator's flagship pay-TV offering, as well as Flex, Comcast's video streaming/smart home product for broadband-only customers.

Comcast is also pursuing a plan to extend its streaming video platform to smart TVs, and is reportedly in talks with Walmart to develop, distribute and promote connected TVs outfitted with Comcast's software and apps.

Tonight's launch comes nearly four years after Comcast acquired Watchwith, a company that specializes in deep metadata (describing what's occurring within the scene of a TV show or movie, for example) and the ability to add in-program interactivity, such as viewer poling and voting. Watchwith has also dabbled in interactive product placement capabilities that could enable viewers to purchase products featured on TV.

Comcast and Watchwith have previously worked together on interactive audience voting for NBC's "The Voice" and E!'s coverage of the "People's Choice Awards," along with a TV-based commerce integration with Ticketmaster and Fandango (now part of NBCU) to help viewers find local theater info and movie showtimes.