Distribution of Peacock stands to get a temporary jolt in the wake of a new deal between Charter Communications and NBCUniversal that bakes in temporary access to the ad-supported, premium form of the recently launched streaming service.

The deal paves the way for Charter's 30 million broadband and pay-TV customers to get Peacock Premium, a version of the service that sells for $4.99 per month as a standalone, for no added cost... for a while. Per the announcement, Peacock Premium will be available to Charter video and broadband customers under an "extended free trial," but the companies did not announce the length of the trial or say whether that free trial might become permanent later. Charter also intends to distribute the Peacock app via its Spectrum Guide platform later this year.

Peacock also sells an ad-free version of the service for $9.99 per month and offers a completely free version with a heavier ad load and a smaller content library than Peacock Premium. 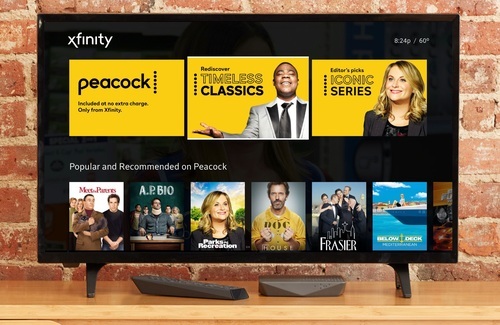 Comcast has already integrated Peacock on its X1 and Xfinity Flex platforms.

The agreement will provide some lift for Peacock, which launched nationally on April 15, 2020. Last month, NBCU CEO Jeff Shell announced Peacock had surpassed 26 million signups, but didn't break down that number by service tier. Shell noted that advertising is Peacock's primary revenue stream, referring to it as a "kind of next-generation broadcast network."

Peacock is one of a string of new streaming services recently launched or about to be launched by major programmers and studios, including Disney+ (73 million subs worldwide); WarnerMedia's HBO Max (12.6 million "activations" so far); ViacomCBS's Paramount+ (a successor to CBS All Access launching early next year); and Discovery+, which launched on January 4, 2021.

The new distribution deal also plays into Charter's ongoing strategy to become a super-aggregator that weaves together its own pay-TV service with OTT-delivered content. Charter, which has already integrated Netflix, cut a deal last year with The Walt Disney Company that puts the cable operator in position to tie-in Hulu, ESPN+ and Disney+.

However, Charter CEO Tom Rutledge has remained wary of programmers, studios and other media companies that continue to develop and launch direct-to-consumer streaming services.

Speaking on Charter's Q3 2020 call last month, Rutledge suggested that programmers adopt a "dual content strategy" whereby they put one set of premium content on their linear TV service and another on their direct-to-consumer products.

"It's yet to be determined whether the owners of content are going to try to support both worlds or not," Rutledge said.