Cable shifts from 'irrelevant' to 'aggressive' in mobile

The US cable industry managed to sign up a combined total of around 600,000 mobile customers in the third quarter, accounting for roughly 8% of the industry's new mobile subscribers during the period.

The figures, from the financial analysts at Evercore, yet again underscore the growing weight that Comcast, Charter Communications and Altice USA carry in the US wireless industry. 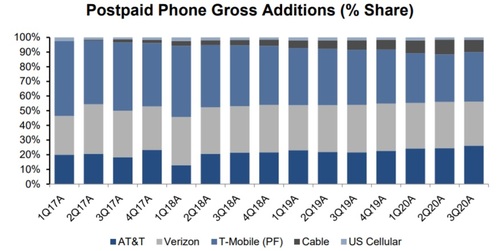 The US cable industry accounts for a growing portion of the mobile industry's quarterly postpaid phone gross additions. Click here for a larger version of this image.
(Source: Evercore)

And perhaps more importantly, the companies appear positioned to increase their share of the market.

"We really feel that we're committed to accelerating the wireless business, it's a really important product for us going forward," said Comcast's Dave Watson during Comcast's quarterly conference call, according to a Seeking Alpha transcript. "We want to be a little bit more aggressive and that's on the roadmap."

Comcast's Watson, as well as executives from Charter, hinted at plans to use their recently acquired CBRS spectrum holdings to build wireless networks in "pockets" where they're seeing lots of mobile traffic. Doing so could significantly reduce the amount of money the companies pay to Verizon.

Further, all of the nation's top US cable companies  including Cox Communications, which is considering its own mobile service  are registered to bid in the FCC's upcoming C-band spectrum auction. The event could dramatically increase their existing spectrum holdings. Already Comcast is testing transmissions in C-band spectrum.

However, it's worth noting that the cable industry isn't moving in lockstep when it comes to mobile. For example, Altice USA is no longer offering unlimited mobile services at its introductory, rock-bottom price of $20 per month; the operator's cheapest unlimited mobile plan now starts at $40 per month. Moreover, Altice USA did not purchase CBRS spectrum licenses like Comcast and Charter did (though it is registered for the C-band auction).

During the third quarter, Altice USA signed up just 18,000 net wireless customer additions, for a total mobile base of 126,000. The company spent much of the third quarter wrapped up in attempts to purchase Cogeco, though its unsolicited overtures have so far been soundly rejected.

Nonetheless, the success of the cable companies in the mobile industry is noteworthy considering they're relatively recent entrants. Comcast and then Charter entered the space on the back of an MVNO agreement with Verizon, allowing them to use Verizon's network to sell mobile services to their own cable customers. Altice USA subsequently joined the sector via a similar MVNO agreement with Sprint, which has shifted to T-Mobile following the close of T-Mobile's merger with Sprint.

And though the trend started in 2017 with the launch of Comcast's Xfinity Mobile service, the new element in the equation is the increasingly tangible possibility that the companies will actually make a profit in mobile.

"With stores re-opening [following pandemic lockdowns] and an appetite for acceleration, we expect Xfinity Mobile momentum to continue," wrote the financial analysts at Cowen in a recent note to investors. They said they expect Comcast's mobile business to begin to produce more earnings than costs starting next year, when the business is expected to cover a total of around 3 million lines.

"2020 has been a good year for cable MVNOs, as their growth outpaced that of the overall industry," noted analyst Mark Lowenstein of Mobile Ecosystem.

But analyst Jeff Moore of Wave7 Research pointed out that the nation's cable companies are going to play in a dramatically reshaped mobile industry starting next year. In recent months, Dish Network purchased Boost Mobile, a private equity firm purchased Consumer Cellular and Verizon inked a whopping $7 billion deal to acquire TracFone, which is by far the nation's largest MVNO with fully 21 million customers.

"The competitive dynamics of the industry are changing, between consolidation of prepaid brands as a result of the T-Mobile/Sprint deal, Dish getting into the game and Verizon's acquisition of TracFone," he wrote in response to questions from Light Reading. "So I think the competitive environment in the prepaid/MVNO space is going to heat up."

Lowenstein also speculated that top cable companies like Comcast and Charter will likely begin searching for ways to improve the economics of their MVNO operations. One method would be to build their own networks, but another might be to search out new network partners.

"I think cable will spread their bets across more 'hosts,' " Lowenstein explained. "Dish would be a logical choice, since Dish needs wholesale customers to help justify/fund its network buildout. The one fly in this ointment would be Dish's continued role in the pay TV business, which could even expand if there's consolidation with [AT&T's] DirecTV, as has been rumored."

Regardless, it's increasingly clear that cable has moved from the "irrelevant" column in the industry  as famously declared by T-Mobile's former Chief Executive John Legere  and into the relevant column.