DENVER -- Cable Next-Gen Technologies & Strategies -- Things are moving fast in the cable access network, and technologies are starting to collide as one innovation after another races through the CableLabs research and development community. Just as distributed access architecture (DAA) technology is starting to see early deployments, Full Duplex (FDX) DOCSIS is nipping at its heels, promising to expand cable's upstream capacity at the same time DAA puts operators on a path to network virtualization.

But cable companies don't want to make multiple upgrades to their infrastructure in quick succession. And that's why Comcast is pushing vendors to make new DAA technology upgradeable to support FDX DOCSIS in the near future.

Speaking by video link to an audience at Light Reading's Cable Next-Gen Technologies & Strategies event here (after being snowed in on the east coast), Comcast's vice president of network architecture Rob Howald said that he began talking to CableLabs and Comcast Corp. (Nasdaq: CMCSA, CMCSK) vendor partners just last week about how to proceed with DOCSIS developments through the rest of the year. Referring to the new DAA optical nodes coming to market, Howald noted that, "A Full-Duplex-capable node has to begin its life as just a regular DAA node."

Once a DAA node is in the field, Comcast wants to be able to use software to upgrade it to support FDX DOCSIS.

The timing is tight. CableLabs is still building out the FDX DOCSIS spec, but because Comcast plans to move forward quickly with DAA, Howald said he'd like to see some early FDX-capable nodes taken out into the field for trials in the second half of this year. Further, he said he expects "some level of symmetrical service proof of concept," i.e. field demonstration showing that FDX DOCSIS delivers on its 5Gbit/s symmetrical promises, in roughly the same time frame. 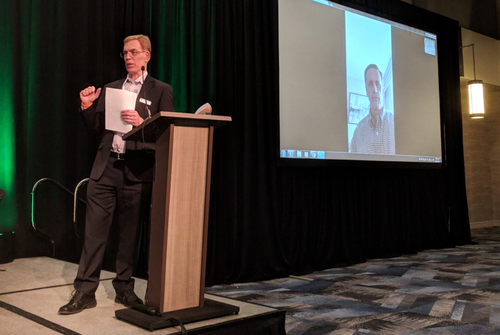 Light Reading's Alan Breznick spoke to Comcast's Rob Howald via video link at the Cable Next-Gen event after a storm closed airports on the east coast.

It's worth noting that Full Duplex DOCSIS technology has already gone through significant lab testing. In fact, Howald told the Denver audience that those working on the technology have actually built simulated cable plant to see how FDX DOCSIS behaves in different conditions.

Howald also emphasized the point that FDX DOCSIS is likely to continue to evolve. Among other things, he doesn't believe speeds of 5 Gbit/s are the limit of what DOCSIS cable networks will one day be able to deliver.