Sales at Zoom Telephonics surged 20.8% in Q3 2019, but the maker of cable modems and other broadband devices still swung to a loss due to the financial impact of tariffs from the ongoing US-China trade war. 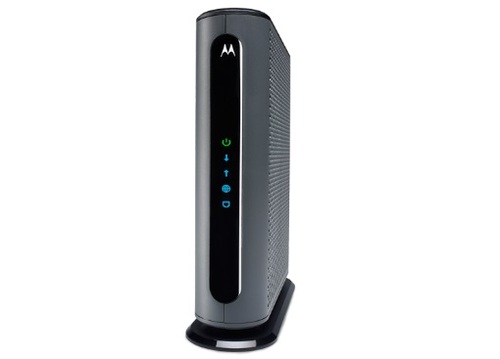 The MB8600 (pictured) is Zoom's first Motorola-branded DOCSIS 3.1 cable modem. Zoom plans to introduce several new D3.1 products in 2020 as well as a a WiFi management and IoT security service that will be sold under a subscription model.

But sales are up. Zoom, whose primary business is the retail sale of cable modems and routers as it develops a new channel focused on service providers, said sales jumped 20.8%, to $10.9 million -- its highest Q3 revenue total going back to 2002.

Zoom -- which has a global exclusive to use the Motorola brand on products such as cable and DSL modems and routers, cellular modems and WiFi range extenders -- is taking several actions to help it escape the tariffs, which recently rose from 10% to 25%.

While possible new tariff policies could help Zoom, the vendor isn't counting on them, Manning said.

Instead, Zoom is seeking an "economic harm" ruling from the United States Trade Representative (USTR). Although initial requests failed, Zoom has since filed another economic harm request along with additional letters and calls of support and expects the USTR to render a decision in late November or December.

Zoom is also moving production for the vast majority of its products out of China to Vietnam, and expects to see that shift start to take hold in Q1 2020. Zoom has signed on a new (but unidentified) manufacturer with production capabilities already in Vietnam; its current key manufacturer is already in transition to Vietnam.

Zoom should be "fully converted" to the new Vietnamese manufacturing partner in Q2 2020, which will help Zoom boost its margins and enable the company to move ahead on a new lineup of products that will debut next year, Joe Wytanis, Zoom's president and COO, said.

As Zoom ramps up production in Vietnam, Zoom will run a "dual approach" that will still have some product production occurring in China for a temporary period as it seeks to smooth out the transition.

Products in the pipeline
Wytanis also provided an update on Zoom's product roadmap for 2020. In addition to introducing several new DOCSIS 3.1 modems and routers, the vendor is also set to introduce two WiFi mesh products early next year. Zoom has also partnered with Manchester, N.H.-based Minim to develop a cloud-based network management and IoT security platform that will be controlled from a Motorola-branded app. Zoom plans to offer that product under a recurring, subscription-based model. That would be a first for Zoom, which has traditionally focused on one-off sales of retail products.

And while retail will remain a big focus for Zoom, which competes with the likes of Netgear and Arris/CommScope, the company is also working on a new service provider channel that it sees bearing fruit by the second half of 2020.

The trick in pursuing that market will be offering products at a competitive price with acceptable margins. "That was difficult to do a year ago," Manning said. "But now with the full support of new manufacturing partners... key component suppliers and transitions taking place in the industry, we are nicely positioned to go after this business."

Zoom also intends to grow sales beyond the US, and into Canada and Latin America. To assist with that effort, the company recently hired Alla Berina, an exec formerly with Arris and BigBand Networks, as vice president of sales.

The Motorola brand license has been a boon to Zoom, which has seen revenues climb since that agreement took effect in January 2016. The current Motorola branding contract expires in 2020, but Zoom has "high confidence" that the company will renew that deal, Manning said.